There are those who would go so far as to call the Goslar Kaiserring the Nobel Prize for the fine arts, but in any event its international prestige is undisputed, indicated above all by the status of the award’s winners. The artist Wiebke Siem is awarded the prize 2014. 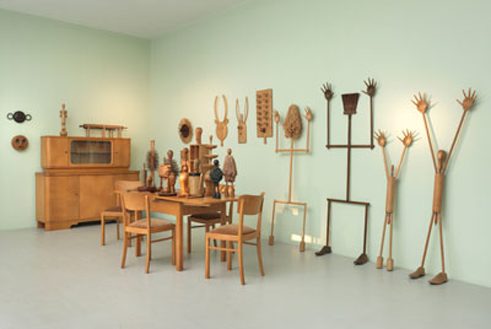 Wiebke Siem, The Faker, 2009 | Courtesy: Wiebke Siem und Johnen Galerie, Berlin. Foto: Jens Ziehe Joseph Beuys, Gerhard Richter, Cindy Sherman or most recently Olafur Eliasson – among the artists awarded the Kaiserring are great names who were already widely known at the time they received the award. The works of this year’s award winner, Wiebke Siem (Berlin) however, still await their discovery by a wider public.

Wiebke Siem, born in Kiel in 1954, began her artistic career in the 1980’s. Inspired by teachers such as Franz Erhard Walther and Stanley Brouwn at the University of Fine Arts (Hochschule für bildende Künste) in Hamburg and a concept of art that called upon its addressees to engage in active participation in art, she first designed pieces of clothing that were intended to be worn, and asked: what is art, and what distinguishes it from fashion and design? By means of minimal de-familiarisation of the textiles, Siem sought to gain, even unsettle, the attention of passers-by. But her concept was not successful because her art works were not recognised as such.She changed her strategy, designed new, un-wearable pieces and showed them at regular art exhibition venues: Starting in 1989, over a period of eight years, she consistently developed a type of apparel collection, made up of oversized, in terms of craftsmanship perfectly executed objects of wood and cloth, stuffed with foam rubber.

Wiebke Siem’s works subject societal conventions to scrutiny. Alone the materials used tell of gender-specific ascriptions: Apparel fabrics of loden and pinstripes for gentlemen, velvet and bold patterns for ladies. Further components of her works such as kitchen furnishings and household objects are traditionally assigned to the female realm.

In her approach to art history, Siem took a particular interest in modernity, which was male-dominated. She came upon odd, whimsical stories like that of Oskar Kokoschka and his fetish doll “Alma.” After the amour fou of the Austrian artist for the “real” Alma Mahler came to naught, he had a likeness made of her in the form of a life-sized doll that from then on served him as muse and compliant ersatz-companion. This Alma-fetish inspired Wiebke Siem to create humorous counter-designs in the form of a male muse, as in her work Pharao (2006), in which the not-very-attractive outer appearance of the goblin-muse makes it pretty clear that, from a female point of view, Kokoschka’s outré approach doesn’t work.

Wiebke Siem plays with art-history categories in other works as well. In 2008 and 2009, she worked on the complex installation The Faker and therefore put together a collection of “primitive” art in a petty-bourgeois dining-room ambient. Seemingly valuable, upon closer examination the mythical masks and mysterious totems reveal themselves to be trivial objects made of rolling pins, potato mashers and mops – a play of cultural valuations of the sacred and the profane. She ironically cites artists such as Pablo Picasso and Max Ernst.

Siem also shows her humorous side when she deals with memories of her own childhood, as in numerous works since about 2005. In surreal domestic settings, goblins, at once comical and creepy, made of cloth balls with skinny little arms and Pinocchio noses, squat on old-fashioned chests of drawers or hide in a wardrobe. In the installation Niema tego złego coby na dobry nie wyzło (2007), a huge lamp object with arms and legs above a kitchen table suggests a woman dangling from the ceiling. The title means: “In every cloud there’s a silver lining,” it is a quote from her Polish mother, who made use of the saying during family disputes.

Wiebke Siem lets the dangling marionettes of recent years speak for themselves – without domestic settings – as with the figure Strange Strings (2013), assembled from a lampshade frame, metal tubes and shoe lasts: “Objects which we can only marvel over,” writes Penelope Curtis, director of the Tate Britain, in the jury’s decision on the Kaiserring award. “Their power resides in their mixing of different languages: the familiar and unfamiliar, the known and the unknown.”

Wiebke Siem will be awarded the Kaiserring on 11 October 2014 in Goslar. An exhibition of the artist’s works will be opened in the local Mönchehaus Museum following the award ceremony.

Christiane Weidemann is a free-lance author and publisher’s reader in Berlin. She has published numerous art books.