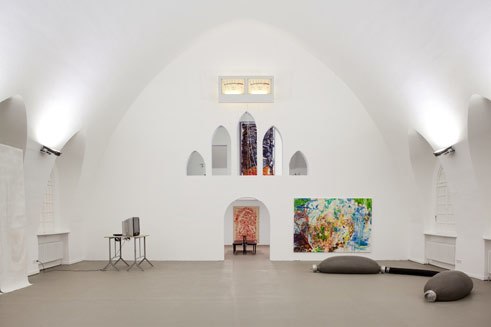 Berlin has always liked to supplement the classic white cube, which permits for the most unobstructed view possible of the works presented in an art gallery, with places having a historical patina. The history of the city is too interesting, and the buildings associated with this past offer too many opportunities for the spectacular presentation of art, for this to be otherwise.

Recently, the picturesque crumbling industrial ruins and socialist administration complexes like the erstwhile motor pool of the GDR in the Berlin district of Lichtenberg, which the art collector Haubrok is currently developing into a creative site with exhibition spaces and studios, have been joined by other, sometimes sacral, places.

Art in the crematorium

There is, for instance, the former crematorium in the Berlin district of Wedding that is now being discovered by the creative scene and becoming the site of various new projects. Here, in an area hitherto untouched by the art scene, gallery owner Patrick Ebensperger, whose art gallery was previously located in the centre of Berlin, moved into an erstwhile mortuary chapel and a few adjoining rooms in mid-2013. The crematorium is part of a larger complex in a cemetery area built in the 1930s, which is now gradually being developed into an art campus replete with studios and offices for the cultural sector. Ebensperger was the first to move here. In the former mortuary chapel, whose neo-Gothic pointed arches shine the purest white after extensive renovations, he has found a particularly good exhibition backdrop for his clients, who include video artist Bjørn Melhus and machine artist David Moises.

For the gallery owner Ebensperger, however, it is important that these rooms in fact serve only as the backdrop for his artists, and not as the main attraction: “It makes no sense to rely on only a spectacular site, because once everyone’s seen it at the opening, the charm fizzles out again. Art must stand on its own; ideally, it should be the art that brings people into the gallery”. Yet spectacular venues do have their effect – “not on the selection of artists; I’ve already settled on that; but on the selection of works, which I make together with the artists with a view to the space”.

The curator Bettina Springer goes a step further: in her new project space in Berlin-Mitte, “Between you and me”, she invites artists such as Tilman Wendland or Anna Talens to make something specifically for the venue or to play with it. And there is much to be discovered in the large ground floor by those invited: the building, built in 1870, lies directly on the River Spree in the heart of Berlin and seems, with its weathered ballroom charm, ornate iron lattice balconies and stairways, to be of another time.


Unrenovated old buildings in the Mitte – today a rarity

Unrenovated old buildings in Berlin-Mitte, which offer scenery for artists that could have come straight out of a film, were of course still the norm twenty years ago in post-Wende Berlin; today, in the now glossy capital, they are quite a rarity. And even as such, something temporary, because Springer will be able to use the rooms only until the real estate developer can implement his remodelling plans for the listed ruin with the help of the new owners. For Springer, this is nothing new; her project-space concept “Espace Surplus”, which she previously realized in his own flat and in rooms in another part of the Mitte, lives from these different surroundings, which the artists temporarily make their own.

The situation is quite different in another formerly ecclesiastical building in Berlin-Kreuzberg. There a creative hub is to be developed over the long term. St. Agnes is the name of the Catholic church complex featuring an extravagant cubic church hall designed in 1967 by the Berlin architect Werner Düttmann, which the gallery owner Johann König has leased for years to come from the district Kreuzberg-Friedrichshain and plans to develop into am artistic and creative centre. Artists and related professional groups such as architects and publishers have been gradually moving into the surrounding buildings of the community centre. The high church hall, which until now has been the intermediate venue for installations by artists such as Michael Sailstorfer and Jeppe Hein, will be extensively remodelled this year. The well-known architect and urban theorist Arno Brandlhuber has been engaged for this construction project, which raises hopes for an interesting interpretation of the church building and shows that the location will in fact be developed into a long-term cultural venue.
Like as the former motor pool of the art collector Haubrok in Lichtenberg and the creative complex at the erstwhile crematorium in Wedding, St. Agnes too will long enrich the Berlin art scene.

Iris Braun is a freelance journalist and author in Berlin.