Brilliant Dilletantes
Ornament & Verbrechen – a Band as a Phantom 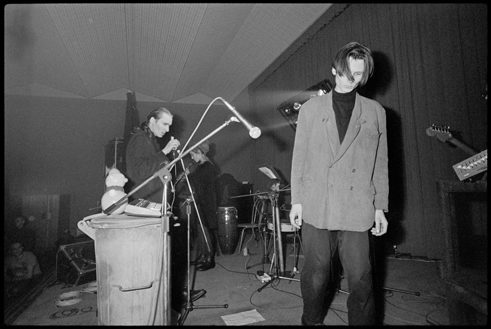 “We built the percussion instruments ourselves”, says Ronald Lippok. For example, a drawer spanned with hide served the brothers as an instrument; other materials for generating experimental sounds, such as a Korg MS-20 analog synthesizer, were borrowed on short notice for concerts or recording sessions from their circle of acquaintances.

The joy in experimentation was not only born out of the lack of materials, says Ronald Lippok, but was also a conscious decision against the existing rock aesthetics. “We were inspired by the Einstürzende Neubauten, Tödliche Doris, Deutsch-Amerikanische Freundschaft, Throbbing Gristle and Cabaret Voltaire”. Ornament & Verbrechen (the name is borrowed from a book by the controversial architect Adolf Loos) mixed industrial and post-punk influences with No Wave sensibility, a mix that occasionally drifted into the psychedelic. Because the members of the group were constantly changing and they performed under various pseudonyms, the evasiveness and unfathomability of the group became its trademark. Ornament & Verbrechen became the best-known unknown band in East Germany.

People knew about the activities of the Geniale Dilletanten (i.e., Brilliant Dilletantes) on the other side of the Wall. In his memoirs Subkultur Westberlin 1979–1989 (i.e., Subculture West-Berlin: 1979–1989), Wolfgang Müller, the West Berlin publisher of the programmatic Dilletanten writings described how the unofficial cultural exchange worked in the 1980s: “In the autumn of 1982, Geniale Dilletanten was published by Merve and shortly thereafter Heiner Müller’s Rotwelsch (i.e., Thieves’ Argot). The publisher wanted to present the books at their factory floor with a Müller-East and a Müller-West party. [...] After the party Heiner Müller packed twenty copies of Geniale Dilletanten in his diplomatic pouch and travelled back to East Berlin. He distributed them in the scene around Prenzlauer Berg.” Through Müller the poet Bert Papenfuss came into possession of the Merve booklet, and he passed it on to the Lippoks.

Cassettes in the underground

Another way of exchanging information over the Wall was radio and television. For example, people in the eastern part of the city knew of the Einstürzende Neubauten through a music video broadcast by Sender Freies Berlin (SFB); in addition there were contributions from the Radio in the American Sector, called RIAS for short. An absolute “must” was the weekly radio show of John Peel for the British soldiers radio British Forces Broadcasting Service (BFBS). Because it was almost impossible to get at vinyl recordings, Peel’s sessions were recorded on tape. Cassettes were also the medium on which local musical production was circulated: unofficial music productions and live recordings were tapped under risky conditions, reproduced in small numbers and passed on. Often underground tapes together with self-published magazines or artists’ editions went from hand to hand: original graphic techniques such as drawings, screen prints and phototechnical reproductions were used for cover design. The Lippoks’ cassette label was called Assorted Nuts. An underground scene and an exchange about its experiments existed not only in East Berlin, but also in Karl-Marx-Stadt (today Chemnitz), Dresden, Erfurt, Leipzig and Halle.

Sounds instead of careers

The circle that met at performances in private houses, churches, independent art events and poetry readings was small. “In the early eighties we didn’t have a chance of getting on radio, finding a record label or giving an official concert”, says Ronald Lippok. Up to the end of the GDR, the brothers refused to apply for a so-called “rating”, which constituted the prerequisite for obtaining a permit to give a concert. With its name and its sound, Ornament & Verbrechen would have probably had a hard time anyway in getting an official performance permit. “For us, it was about developing sounds and music. We let ourselves drift. It wasn’t about careers.” Success came after 1990, in groups like Tarwater and to rococo rot. Yet Ornament & Verbrechen was never declared dead. It still haunts the present like a phantom.


Starting 23 April 2015 in Minsk (Belarus) and following with a global tour, the exhibition Geniale Dilettanten (Brilliant Dilletantes) will present the most comprehensive survey of German subculture of the 1980’s to date. It can be seen in Munich’s Haus der Kunst from June–October 2015. Geniale Dilletanten is a touring exhibition by the Goethe-Institut.

Kito Nedo is a cultural scholar and freelance journalist.