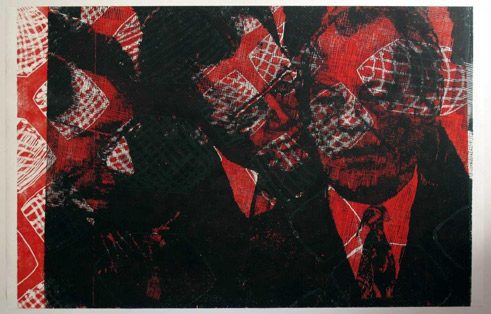 The Bund has set an annual budget for acquiring contemporary art. In 2016, this budget runs at about 400,000 Euros. The rule of thumb for acquisition is that the work should have arisen post-1945, i.e. under the Bundesrepublik Deutschland. Today, the State Collection comprises about 1500 works and is growing from year to year.

The “Sammlung zeitgenössischer Kunst der Bunderepublik Deutschland” is administered by the State Minister for Culture and the Media, Monika Grütters. State Minister Grütters describes the trends in current acquisitions policy in the following terms: “Contemporary artists are increasingly taking up political and socially relevant topics and reflecting and working on them critically as well. In particular the members of the current and previous acquisitions committee have therefore also placed great importance on proposing works with historical or political background.” In this context she referred to works by Peter Rösel and Antje Majewski.

In 2011 the Bund purchased an installation by Peter Rösel from 2010 consisting of two wooden telephone benches with official phone books for the district of the Reichspostdirektion Berlin on their shelves. The thick, comprehensive phone book on the left bench is from 1941, at the outset of the Second World War. The thinner phone book is dated 1945, the end phase of the war. 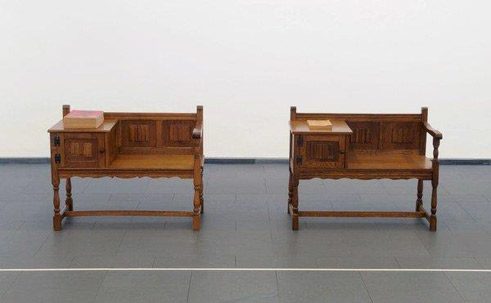 Peter Rösel, Installation untitled, 2010 | © Peter Rösel, Bundeskunstsammlung The greatly reduced volume of the phone book from 1945 bears mute witness to how greatly the war had decimated the population of Berlin, how high the losses were due to deportation and the murder of regime critics and Jewish inhabitants, through the participation of the male population in the war, and from the bombing raids on the city. The installation gives viewers a great deal of free space to imagine the events for themselves, but also offers concrete impulses.

Grütters also had in mind a 2013 work by Antje Majewski; a painting of a miniature dog (“Miniaturhund”) after a miniature dog in plastic, made from a plastic toothbrush as a kind of good-luck charm in Ravensbrück concentration camp. It is documented that, before 1945 it was given as a gift to a celebrated female inmate of the women’s concentration camp: the French Communist Martha Desrumaux, who had fallen into the hands of the Gestapo in Lille in 1941 and had been deported to Ravensbrück. Miniatures such as the little dog depicted in the painting were given to inmates by their fellow prisoners as small gifts or good-luck charms. The originals are now kept in the collection of the Ravensbrück Memorial. Majewski has recorded these miniatures in a series of paintings. They tell us about cooperation and solidarity in the labour and extermination camps of the National Socialist regime like witnesses to lived history. The miniature dog may indeed have brought Martha Desrumaux good luck, since she survived the camp and returned to Lille in 1945. 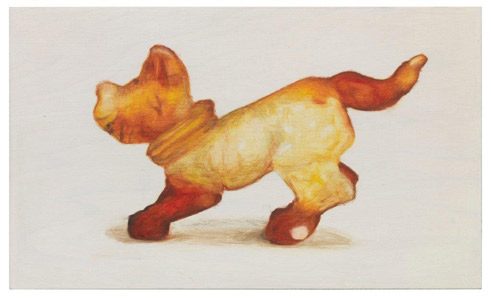 Whatever makes it into the collection is decided by an independent commission of experts which is newly appointed every five years, “... in order to guarantee a collection panorama that is as broad as possible,” as Stephan Berg, director of the Kunstmuseum Bonn and a member of the acquisitions committee 2012–2016, explains. The collection therefore bears the signature of the commissions. Works are included in the collection whose creators no longer command headlines, and also high-profile objects, time-independent key works such as Gerhard Richter’s oil painting Sekretärin (Secretary) from 1963. It was purchased in 1977. Today, Richter’s works bring in record prices at international auctions, and the commission would never be in a position to acquire such a work today, as its market price would break the collection’s annual budget. This is also a reason for gaps in the collection. Thus, works by Anselm Kiefer are completely absent, and Jörg Immendorff is represented merely by marginal works on paper. The same applies to Sigmar Polke and Thomas Bayrle, artists whose significance is continually on the upswing in our times, evidenced by the price evolution of their works and their strong presence at international art shows such as the Documenta.

The acquisitions commission is currently attending three art fairs, the Art Cologne in Cologne, Germany, the Art Basel in Basel, Switzerland and the Frieze in London, U.K. The acquisitions budget is divided among the three fairs, “with a slight tilt in favour of Cologne, because the density of German galleries is naturally greatest there,” thus Berg. This is also due to another goal of the government’s collecting activity, since the Bundesrepublik seeks to support artists in Germany economically and also the galleries that have established themselves there. Although the State Collection has no exhibition building of its own, the individual works can still be seen as permanent or temporary loans to museums or in facilities of the Bund. If the term of office of an acquisitions commission has expired, the most recently acquired works are presented to the public in an exhibition. But no one has to travel to see the collection: all works are published in the collection’s data bank. Information on the works and in most cases pictures of them can be accessed day or night, internationally.

Bettina Krogemann is an expert in modern and contemporary art in the auction business and a free-lance author in the areas of art, design, architecture and dance.