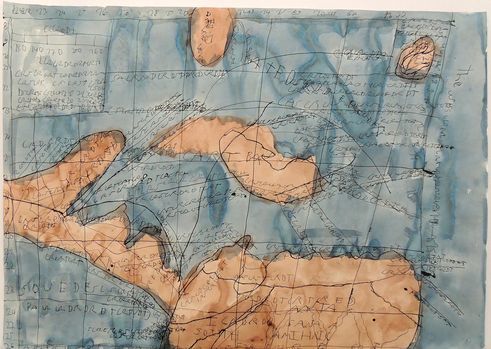 The exhibition Touchdown in the Bundeskunsthalle in Bonn is an unusual presentation for an art museum, as it spotlights an anthropological theme: investigating and delineating the contours of Down’s syndrome, also called trisomy 21.

This syndrome arises through a tripling of the human chromosome 21. People with this trisomy display physical features and possess abilities that people without trisomy 21 do not have. In addition, they are susceptible to particular illnesses, including serious cardiac problems, thyroid deficiencies and leukemia. Their life expectancy is significantly lower than that of people without trisomy 21.
Under the project direction of Henriette Pleiger of the Bundeskunsthalle, three independent research curators and an advisory board to Julia Bertmann, who has Down’s syndrome, belongs, have assembled over 100 exhibits from archaeology, history medicine, genetics, film and the visual arts. What is unusual about the Bonn concept is the “participative” model of the exhibition’s design, thus Katja de Bragança, Touchdown’s curator. De Bragança, a biologist who majored in human genetics, has been working closely with people with Down’s Syndrome for over 20 years. In Touchdown ‘s case, “participative” means that one half of the exhibition and the catalogue were developed and written by people with trisomy 21.

From her long years of experience with people with trisomy 21, Katja de Bragança knows that “that these people are strikingly strong and equipped with an extremely high degree of resilience.” Their strength makes them resistant to humiliation. People with Down’s Syndrome are often stressed by being stared at. “Actually, I get along fine with people, including non-handicapped people, but I find it stupid when they’re always eyeballing me…,” explains Julia Bertmann. “I imagine my future in such a way that non-handicapped people sometimes see my real self, and also understand why I am the way I am.”
According to the expert de Bragança, one special ability of people with trisomy 21 is their linguistic faculty, which “is characterised by a very high degree of abstraction, clarity and honesty.” The texts in the exhibition and the catalogue by authors with Down’s Syndrome exemplify this, conveying their ideas and feelings on human and personal themes without superfluous embellishment. Julia Bertmann explains in few words her optimal choice of partner: “It has to be a nice, attractive, handicapped young man who isn’t boring.”

A question runs through the entire Bonn exhibition like a leitmotif: is a life with trisomy 21 of less value than a life without it? The resilience cited by de Bragança is demanded once more of those affected, to withstand this question: a sombre chapter of the exhibition tells of the “T4” programme, the systematic murder of more than 70,000 human beings whose existence the National Socialists classified as “worthless life” under the banner of German racial-hygiene madness between 1940 and 1945. Among them were children and adults with trisomy 21. Despite Johanna von Schönfeld’s view: “That’s 80 years past. Today’s world is better than 80 years ago,” the theme is nonetheless still topical. In March 2015, the German daily newspaper Die Welt ran the headline: „Nine out of ten couples abort in cases of trisomy 21. Based on the valid medical indication, the abortion can be carried out until shortly before birth. Katja de Bragança is aware that women frequently decide on an abortion when they receive insufficient support from their partners or the latter clearly express their opposition to the birth. Julia Bertmann comments on this state of affairs without any trace of a reproachful undertone: “Because they (the couples) think they won’t be able to manage. Because they don’t know that a person like me can have a good life, a life with Down’s Syndrome can be happy. Because they don’t know me.”

Prejudice plays no role in art. This is also shown by the Bonn exhibition in which artworks by people with and without Down’s Syndrome are displayed on an equal footing, side by side. Among the celebrated examples of artists with Down’s syndrome is the US-American Judith Scott, who died in 2005 at the age of 62. She lost her hearing very early on, and used her art to communicate with her surroundings. The Ball, a highly characteristic work of hers, is to be seen in Bonn. Ball is a wrapped-up ventilator that Scott wound about with yarn until it had taken on a round, organic form. Judith Scott was one of those people who have led highly successful lives through art despite their physical disabilities. Their works are part of the inventories of important collections such as the Collection de l’Art Brut in Lausanne. In 2014, the Brooklyn Museum in New York devoted a retrospective to her, and she is highly valued on the art market: In September 2016 a collector paid over 19,000 Euros for a found object wrapped in yarn by her.
The works of Markus Keuler in the exhibition demonstrate just how inspiring people with trisomy 21 can be for artists. The wood sculptor, who lives in Bremen, chooses them preferentially as models for his life-size sculptures, for instance Otto from 2012. The models are enthusiastic. “If Markus Keuler wants to do a sculpture of me – I’m in!” says Natalie Dedreux, an author with Down’s Syndrome.

The Exhibition by and with People with Down’s Syndrome can be seen until 12th March 2017 at the Bundeskunsthalle Bonn.

Bettina Krogemann is an expert in modern and contemporary art in the auction business and a free-lance author in the areas of art, design, architecture and dance. Copyright Text: Goethe-Institut, Bettina Krogemann. This work is licensed under a Creative Commons Attribution – Share Alike 3.0 Germany license.