© Aleksandra Domanović - courtesy of the artist and Tanya Leighton Gallery
Open gallery
By a coincidence of history, widespread internet use came on the heels of socialism’s collapse in Eastern Europe. Routes of global commerce multiplied in parallel with the speed of information. From today’s standpoint, a world where capitalism and socialism coexisted is associated with rhythms of life defined by slower forms of media.

Aleksandra Domanović considers this condition through her own experience and the history of her native Yugoslavia in 19:30 (2010). The title comes from the time slot of the Yugoslav nightly news, when the whole country would take time to view the broadcast. Watching the news became even more important to the daily routine as ethnic tensions mounted in the late 1980s, but that routine, like many other unifying social norms, dissolved along with Yugoslavia itself amid open conflict. 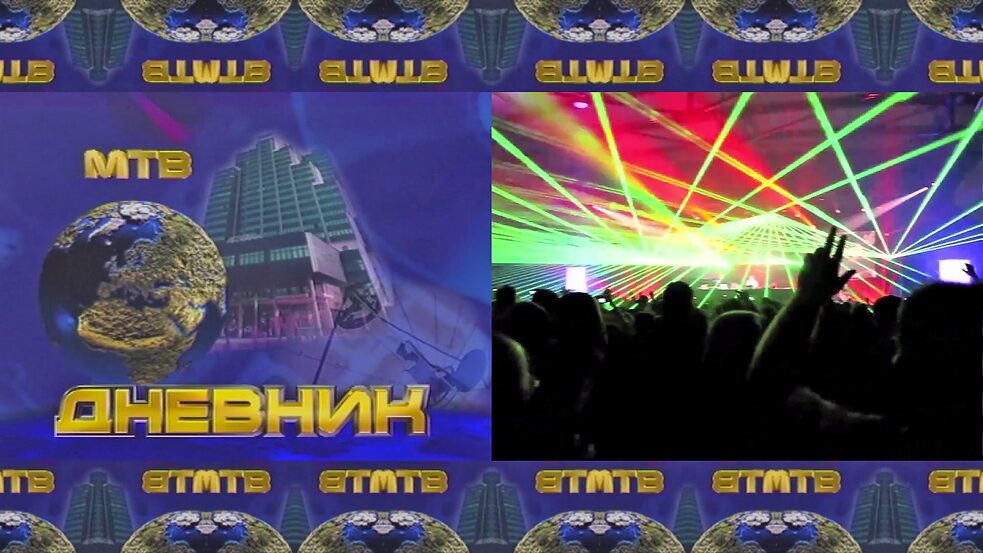 © Domanovic
Around 1995, electronic dance music became popular in the former Yugoslavia (a bit later than it did in the rest of the world, due in part to the international isolation of the warring republics) and young people crossed the new borders to attend parties and dance to wordless, repetitive techno—a musical genre free of national associations. When information can be accessed at any time, the nightly news loses the power to create a simultaneous, shared experience for a multitude of people. But a live event like a rave, Domanović points out, still holds that power.
19:30 is her attempt to reconcile past and present.

In 2009 Domanović traveled around the former Yugoslavia to collect idents, the graphical introductory sequences that precede news broadcasts. Her research process involved visits to television stations, national archives, and even peoples’ homes, and resulted in an extensive collection of idents, annotated with historical details. After assembling the collection, Domanović reached out to techno DJs and asked them to use the idents as samples and mix them in their music.

19:30 highlights how the nature of shared experience has changed and unites two disparate models of it. Domanović’s collection of digitized idents isn’t an archive, a graveyard for dead scraps of history, but an active library, where audible pieces of public memory gain new life. Through remixing and live performance, the old melodies become free, like bodies given over to dance.

Aleksandra Domanović was born 1981 in Novi Sad, Yugoslavia and grew up in Slovenia. She works with sculpture, video and born-digital content. Guided by intensive research, her projects have explored the pioneering discoveries of women scientists and depictions of gender in science fiction. Her mining of the social and political histories of former Yugoslavia, her birthplace, has become a useful tool for interpreting the current European situation.