Dominique White has developed A refusal to be contained, a refusal to die (2021) for TECHNO WORLDS, a new sculptural work that explores the histories and nautical myths of the Black Diaspora, interwoven with subaquatic Afro-futurist and Afro-Pessimist narratives that have been influenced by Detroit Techno and Black Radical Thought.

Detroit Techno duo Drexciya developed the idea of an underwater civilization and translated it into a sonic third space. This world is populated by unborn children of pregnant women thrown overboard during the Middle Passage, a route for ships carrying enslaved African people to America over the Atlantic Ocean. The story between a utopian society and re-imagininging a Black future on a dystopian Earth, lies the base for White’s aesthetic explorations. The artist's fragile sculptural installations reference this narrative and a notion she defines as the "Shipwreck(ed)", which translates both as a reflexive verb and a state of being. It is used to not only highlight the lasting influence of the slave trade or the ‘Ship’ on the fungibilty of Blackness, but its potential to disrupt and eventually destroy the current trajectory of Blackness as capital.

White’s research also extends beyond the tangible, with a curiosity for both the destruction and mythicism that hurricanes in the Caribbean leave in their eternally transformative wake in the sea. Her visual vocabulary and materials combine an emulation of an abandoned vessel at sea using destroyed sails, tired hand-woven nets, mutilated anchors and deflated nautical buoys with raffia and cowrie shells which are all cast and coated in a ghostly shroud of kaolin clay. She utilises this forceful unification as a means of dissociating the motifs from their original function and redefining them as bodies charged with retaliation, protest and resilience. These works, or bodies, delicately balance the states of preservation, decay and destruction whilst emanating a warning or a threat of what is to come. 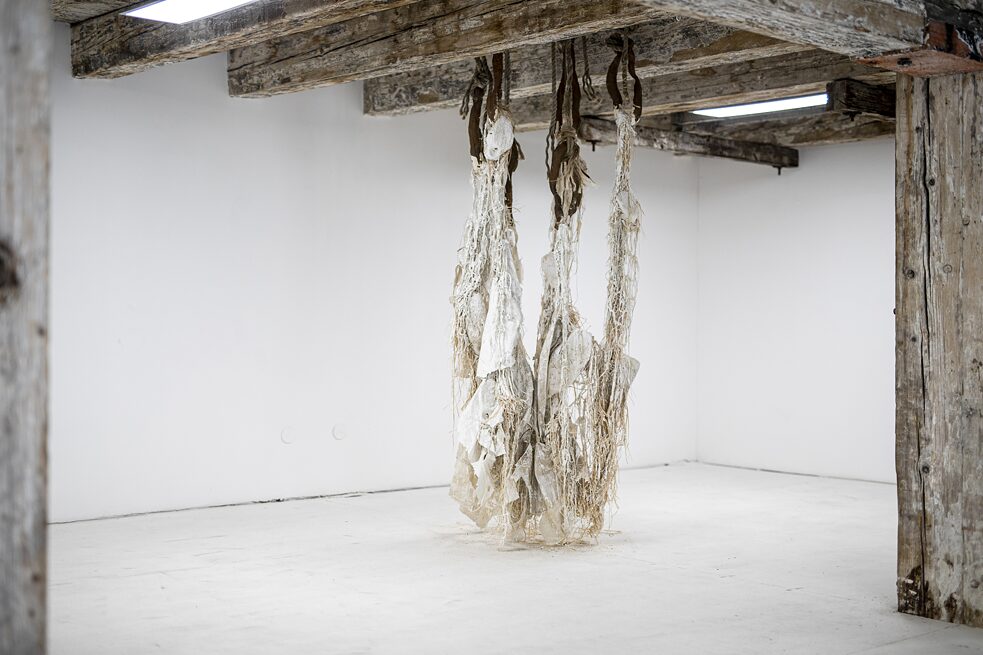 Dominique White (born in UK) is a graduate of Goldsmiths, University of London and Central Saint Martins. Recent exhibitions include Blackness in Democracy's Graveyard at UKS, Oslo (2021); Possédé·e·s at MO.CO, Montpellier (2020-1); and Boundary + Gesture at Wysing Arts Centre, Cambridge (2019).

Dominique White was awarded the Roger Pailhas Prize in 2019 in conjunction with her solo show at VEDA and has received awards from Artangel (UK) and the Henry Moore Foundation (UK) in 2020. Dominique White was in residency at Sagrada Mercancía (CL), Triangle France – Astérides (FR) and La Becque (CH) in 2020 and 2021.
Top