Manomama
An Alternative in Cloth

Growth in compassion rather than in capital – Sina Trinkwalder shows us how a fair workplace actually works. Her company Manomama produces garments –locally, in a sustainable manner and with a social conscience. 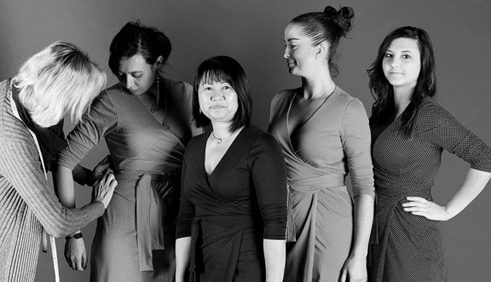 Manomama | © Manomama Augsburg, Willy-Brandt-Square 1a: a huge shopping center offering everything that a town mired in ennui can desire: from cheap, trendy garb to bright-colored donuts. Behind this buyer’s paradise we find another building. A bunch of middle-aged women stand outside, smoking, drinking coffee, laughing happily. Is this where we find the clothing company Manomama? It is. No sooner you walk through the door, you are met by a clatter of sewing-machines and a multitude of seamstresses working away at their posts, piles of cloth in a rainbow of colors all around them – an unusual sight in Germany these days. 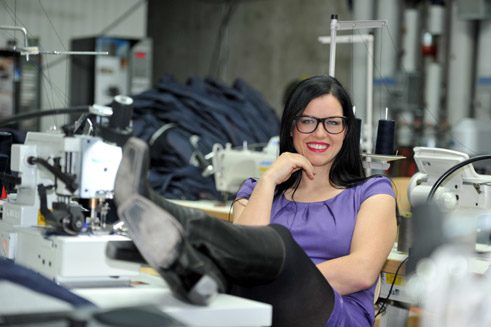 Sina Trinkwalder, 2014 | Photo: Stefan Puchner Germany’s apparel industry last flourished in the post-war period. Things went downhill after that. Local production was replaced by cheaper competition elsewhere in Europe. The number of German garment companies fell by almost a third between 1963 and 1973; the industry headed towards a crisis. Globalization outsourced production to the so-called low-wage countries. Today China is the world’s largest exporter of fashion apparel. Garments “made in Germany” are a rare commodity.

A garment company that sets up shop again in Germany without making any political demands or vying for official subsidies and in the midst of the financial crisis… this takes a lot more than guts – rather, it calls for nothing short of a miracle.

“You must make the miracles yourself”

If your name is Sina Trinkwalder, then it’s easy to see how the things any investor would try to dissuade you from doing were, in fact, able to work. Sina Trinkwalder founded the garment company Manomama in Augsburg. In 2013 she published a book called “Wunder muss man selber machen. Wie ich die Wirtschaft auf den Kopf stelle,” German for “You Must Make the Miracles Yourself – How I Turn the Economy Upside Down” – a title teeming with the self-confidence that is also Trinkwalder’s signature trait.

The title of the book combines the familiar sayings “Miracles happen” and “You have to do everything yourself” because Sina Trinkwalder knows one thing for sure: when you tackle something with drive and ambition, you can make the impossible come true. When she was only 24 years old and still in university, she founded a small advertising agency together with her husband. She made a lot of money but knew that something was missing. It was only when her son was born that she realized what it was. “My values have changed. You normally set up a company when you have a great idea for a product. My idea, instead, was people. It was about maximizing compassion, not capital. It was about having a company that can offer everyone a job. Today, many of her employees are older people, people who have been unemployed for a long time or single parents – that is, people who can no longer find a job in the “normal” work world. Being able to make a living with your own two hands creates self-confidence in people who have already given up on themselves.

The question of what to produce is easily answered in the city of Augsburg, traditionally a textile manufacturing center. The answer is clothing. Trinkwalder, who had never worked in the apparel industry before, delved into the subject head on. She spent almost three months looking for long forgotten know-how and set up a supply chain. Craftspeople who make buttons and zippers, expert dyers and weavers had to be found locally –and they all had to be able to work in a sustainable way and produce within a regional value-added chain. 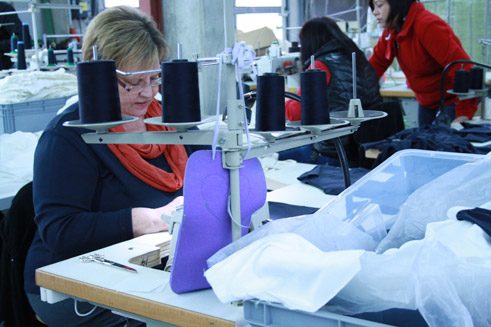 Production Manomama | Photo: Marie-Sophie Platzer Trinkwalder finds that the labels “social business” and “eco-social” are meaningless, though. “I just wanted to found a good ol’ company,” she says – one that treats both its employees and its customers in a fair and decent way. The clothing is affordable but without sacrificing quality. All components of a Manomama garment are sourced from local production facilities – the only exception is the cotton imported from Turkey. But a new “Augsburg denim,” Manomama’s blue classic jeans, will soon be available and even contain Bavarian hemp among its fibers. Trinkwalder considers her garments should not discriminate anyone – with sizes ranging from XS to XXL, everybody can find a Manomama piece that will fit and look well. Most garments are sold online; the rest are sold directly through a network of “Manomommas” or at health food stores. Starting in February 2014, you can find Manomama underwear at the stores of retail chain Real. Trinkwalder designs the garments together with a small team who helps determine the styling and fabrics. She focuses on a line of basics: t-shirts for men and women, wrap dresses, skirts. “Less to Go. More to Stay” – the slogan you can read on Manomama’s fabric bags refers to the throwaway mentality of many people who “go pick up some new item’ at a fashion boutique as though it were a ‘coffee-to-go.’ 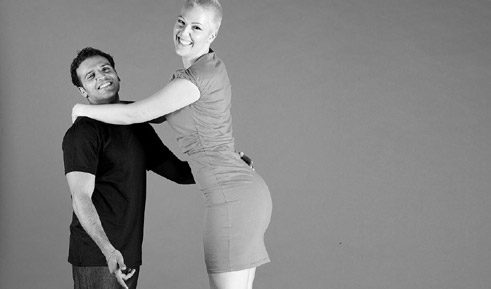 Manomama | Photo and © Manomama Manomama thinks creatively in all respects. When asked what the logo means, Sina Trinkwalder replies with a subtle smile: “The feather is the symbol of a silent revolution. But our feathers cross, like swords.”