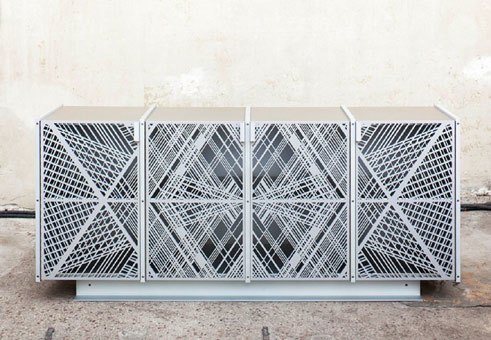 Designer Tina Roeder strips objects of daily use down to their skeleton to reveal their inner soul. In an appropriation process she then individually recreates the objects by transforming her findings into materials and form.

The metal gate squeaks as it drops into the lock. Rattling noises can be heard from one of the rear brick buildings of the former hostel for the homeless. The old dormitory now houses a metal workshop that specialises in prototype production. And also in the production of unique pieces. One of these is now ready for shipment, an approximately two and a half metre long cabinet or credenza, as its creator, Tina Roeder, calls it. 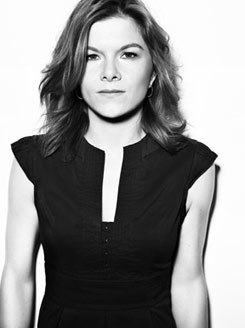 Tina Roeder | © Markus Jans At a first glance the furniture piece front resembles an ink sketching on a drawing board. A closer look, however, quickly reveals the filigree precision craftsmanship with which openings have been cut out of the aluminium surface. Solid areas are again formed by individual struts where they overlap to produce a kaleidoscope-like crystalline symmetry.

“Structures and architecture fascinate me and the way in which we perceive these forms,” Tina Roeder comments. “When we walk through the streets, for instance, we never see the buildings at a 90° angle, there is always a new perspective with every step we take. This is what I refer to in my credenza series Building Structures: architectural structures and fundamentally also social structures.“ 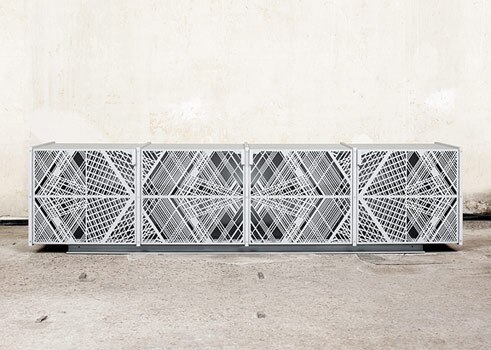 Credenza Custom Cabinet, 2014 | © Studio Tina Roeder Having trained at Saint Martins College, London and at the Design Academy in Eindhoven, Tina Roeder, who now lives in Berlin, belongs to the young generation of designers who are blurring the line between design and art. From the perspectives of design and architecture history she works on furniture typologies. An excellent example of this approach is her credenza series in which the association to modern architecture and art deco is clearly evident. Her work also shows parallels with the conceptual art of Marcel Duchamps or with Donald Judds’ minimalism. 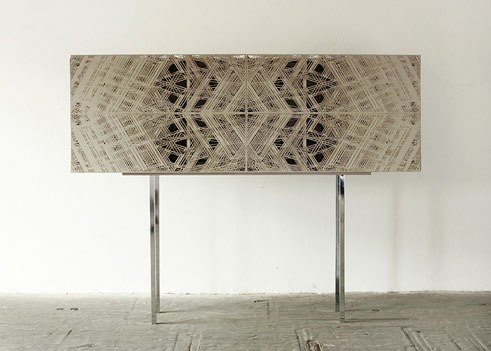 Credenza Structures Facades, 2008 | © Studio Tina Roeder For her credenza series Building Structures, that has been consistently further developed since the founding of her studio in 2007, she strips down architectures to form new structures, new perspectives and new textures. To do this, she studied archetypal materials from furniture design and architecture history, and has to date created five complex cabinets, mostly handcrafted from mono-materials such as grey board, glass, steel combined with leather as well as aluminium, with more than 5,000 individual pieces. 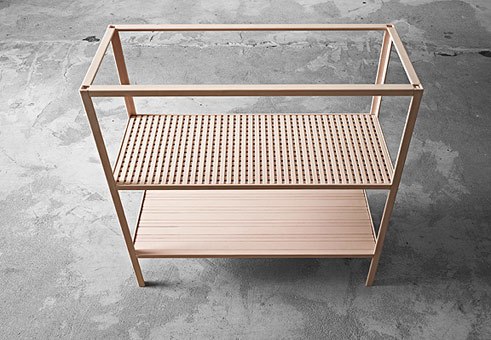 Lederregal à La Recherche, 2012 | © Studio Tina Roeder Alongside this credenza series Tina Roeder has been working on leather shelves that function in the same manner. Tina Roeder has completed two shelf objects called à La Recherche and Blue Leather Shelf. These designs are steel frames that have been meticulously hand-wrapped in leather – in an analogy to natural skin on the human skeleton. Never straying from her principles Tina Roeder renounces a production method that focuses on quantity. This idea is enhanced through the use of high quality materials and through the time spent on assembling the objects in laborious and meticulous precision work. 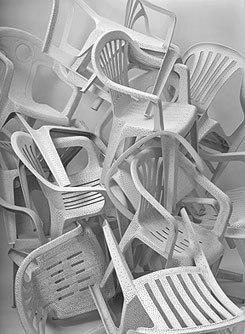 Monoblocks White Billion Chairs, 2002/2009 | © Studio Tina Roeder This working method can be traced back to a key experience in 2002, during her first year of studies at the Design Academy in Eindhoven, and this still has a hold on her today. Her professor, the Dutch designer, Jurgen Bey, gave the students the slippery task of turning something with an ugly appearance into something that looked beautiful. In her neighbour’s front garden Tina Roeder spotted a suitable object: a monobloc, an archetypal, anonymous plastic chair that was the perfect embodiment of mass production.

“To reveal the beauty of the chair’s democratic idea I wanted to breath new life into it, give it a new status and identity“, Tina Roeder explains. She manually roughened the smooth surface of the chair and perforated it with thousands of holes the size of matchsticks, creating visual lightness through the removal of material and making it less overpowering. This gave the chair a coral or porcelain-like surface and the perforations made it delicate and fragile. As is true in nature, everything appears perfect to begin with, yet it is these barely perceivable irregularities that lend the regular form vitality and beauty – quite in contrast to industrial mass production where one moulded piece is identical to the previous one. 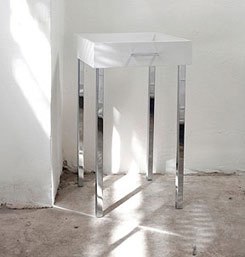 Tischserie: Drawer Side Tables, 2008 | © Studio Tina Roeder This “dematerialisation” of the object and the incorporation of the observer has had a firm grip on Tina Roeder ever since. As in conceptual art, her designs focus on the idea. “I am not primarily interested in the form, the material, or the technique applied, it is more the idea or the history behind it that takes part in shaping an object”, she adds. “I lay open archetypes or typologies in order to sharpen our perception of things and to question familiar structures and perceptions. And in this way gain a precision of expression.“

Katharina Horstmann is design curator as well as a journalist and writer.