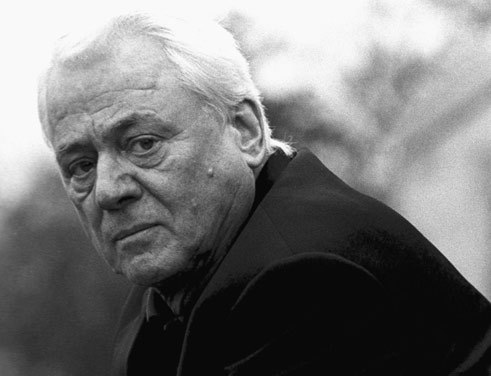 Any question of contemporary and cultural history provides Alexander Kluge with subject matter for his cinema. His most recent works are impressive testimony to the continuity of his oeuvre over the space of more than 50 years.

He is one of those artists whose life and work fill the observer with admiration and envy. The list of Alexander Kluge’s engagements during the first half of 2014 in Berlin alone makes for impressive reading: in April he presented his new book 30. April 1945: Der Tag, an dem Hitler sich erschoss und die Westbindung der Deutschen begann (i.e. 30 April 1945: The Day When Hitler Shot Himself and the Westernization of Germany Began). Shortly afterwards, he gave a lecture at the “Haus der Kulturen der Welt” in which he explored the relationship between civilization and urban development. At the Theatertreffen festival in May he gave a speech about the function of the stage as a living and enlightening public sphere. July saw him at the Zeughaus cinema presenting his new DVD Bilderwelten vom Großen Krieg: 1914–1918 (i.e. Images from the Great War: 1914-1918) and engaging in a lively discussion with the audience. Alexander Kluge never learnt to make himself scarce. And why indeed should he? He is at once a filmmaker, philosopher, cultural critic, story-teller and television producer. Everything appears to provide him with subject matter to feed his thirst for knowledge and his imagination, and any question of contemporary and cultural history appears to fall within his intellectual remit. He is, as it were, the polymath among German film directors.

He plays a central role as a pioneer and maverick in the history of New German Cinema. He was one of the driving forces behind the Oberhausen Manifesto, which in 1962 proclaimed a break with the old, history-amnesic German post-war cinema. From 1963, he was a professor at the Ulm School of Design, where he taught and influenced an entire generation of filmmakers. His first feature-length film, Yesterday Girl in 1966, became one of New German Cinema’s first successes. Two years later, his film Artists under the Big Top: Perplexed earned him the Golden Lion at the Venice Film Festival. Kluge came to filmmaking in a roundabout yet profitable manner. Born in Halberstadt in 1932, his father was a doctor. He studied law, history and church music. After graduating, he worked as a lawyer at the famous Institute for Social Research in Frankfurt, where he became a confidant of Theodor W. Adorno. Although no great fan of cinema himself, Adorno awakened his interest in the medium and arranged for him to work as a volunteer under Fritz Lang, who was in Berlin filming The Indian Tomb. Kluge must have found the shooting extremely boring, for he spent most of the time in the studio’s canteen writing stories that he wanted to turn into films himself. As he says himself, he did not learn filmmaking from Grand Master Lang, but from his friend Edgar Reitz, who was the same age as him.

Objecting to the official writing of history

Brutality in Stone, Kluge’s first short film in 1960, already clearly bears his signature, as he illustrates how Germany’s Nazi past lives on in ruined buildings. Ever since, his name has stood for highly engaged cinema that objects to the official writing of history. Kluge was the driving force behind anthology films that responded to political upheavals, such as Germany in Autumn (1978, about the terrorist group Rote Armee Fraktion/RAF) and The Candidate (1980, about the election campaign of Franz Josef Strauss). His curiosity and inquisitiveness begin where those of conventional media reporting end. Germany in Autumn sees the first appearance of history teacher Gabi Teichert (Hannelore Hoger), who two years later becomes the eponymous heroine of The Patriot. The excavations that she undertakes in German history can certainly be viewed in a literal sense. She is the alter ego of her director, who proceeds in the same way as an archaeologist would, gathering together and surveying splinters and fragments. This method of searching for clues is reflected in the open structure of his films, the collage technique of which is unpredictable. He creates a montage of disparate elements, photographs, paintings, archive material and staged sequences, and works with counterpoints and subheadings. This allows scope for the active viewer to put the film together in his or her own head at the end. He also reveals the courage and stubbornness of the author filmmaker in his works for television, making valiant attempts in formats like News & Stories and 10 vor 11 to open the medium up to a new audio-visual vocabulary. Those formats are only possible in private television due to legal requirements for a certain percentage of culture-related magazines in private television.

His most recent works are impressive testimony to the amazing continuity of his oeuvre over more than half a century. In his book 30. April 1945 he offers a “chronicle of the last working day of the Third Reich”. He juxtaposes the memories of soldiers who served at the front with impressions from his own childhood, reminds the reader that it was on this day that the United Nations was founded in San Francisco and researches what Thomas Mann was thinking about while exiled in California. In his film essay Bilderwelten vom Großen Krieg he is also interested not so much in the historical panorama of the First World War but in the juxtaposition and synchrony of episodes and stories. He specializes in discovering telling and illuminating details. The DVD is also a homage to his uncle, who fell in the Battle of Neufchâteau in 1914. These are by no means compulsory exercises to mark the passing of anniversaries, but instead reveal Alexander Kluge’s unique talent for creating connections with the past. For him, the lessons of history are still irrevocably topical, and the loss of history is synonymous with the expropriation of civil society.

Gerhard Midding is a film journalist who works for daily newspapers and magazines. He has also made television and radio documentaries about film issues and collaborated on many books about film.