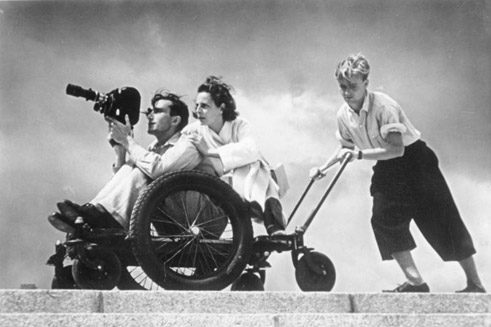 In her “Olympia” films Leni Riefenstahl staged the body as a mass ornament. There is hardly another director as controversial as her. In Germany in particular, the perception of her Nazi propaganda films has long swung between political and moral condemnation on the one hand and appreciation of their aesthetic ideas on the other. How can these positions be reconciled? An interview with film historian Rainer Rother.

Mr Rother, one aspect that has been of particular importance in the reception of Leni Riefenstahl’s films is their representation of the human body. Why?

Through her rendering and cinematic exaltation of the Nazi Party Rallies’ mass choreography, Riefenstahl has left her mark on the collective visual memory. Her montage transforms the parades of party organizations into almost abstract rhythmic movements – into images that make individuals disappear into a pattern, a geometry. The design of these scenes has often been quoted, in compilations as in many stagings of military formations and masses of people. Riefenstahl used classical narrative structures to present the body as a mass ornament. At the same time, her cinematic staging celebrates the individual body. Not only the athletes in the Olympia films (1938) inspired her to the representation of erotically appealing bodies; the same applies to Das blaue Licht (The Blue Light, 1932) and Tiefland (Lowlands, 1954). Her training as a dancer enabled her to show the eroticism of movement.

Aesthetic idealization of the body

What is the political significance of the “body” cult in Riefenstahl’s films?

Riefenstahl’s fascination can be seen most clearly in the two-part Olympia film. The athletes are staged as ideals. Ever since, the presentation of the athletic body has been an advertising point and is considered the modern ideal of beauty. Olympia glorifies Nazi Germany as the heir of Greek antiquity, both aesthetically and politically. The charging of the aesthetic, the “purified” ideal, purged of all imperfections, fit in seamlessly with the racist propaganda. Olympia alludes in fact to the racist model many times. For Riefenstahl, however, the idealization of the beautiful body, sculpted by sport, is primarily an aesthetic idealization. Thus, for example, Olympia also prominently shows the outstanding track-and-field athlete of the games, Jesse Owens.

The theme of the “body” also influences Riefenstahl’s work even after the Nazi period – for instance, in the photo books on the Nuba tribes, for which she received numerous awards. Did the nature of her staging of the body change in the meantime, or did she remain faithful to her earlier style?

The trips to Africa were also a search for “primordiality”. Riefenstahl sees this embodied in the Nuba and seeks to present it in her photographs. Nature here is contrasted with and opposed to civilization. In their exclusive concentration on strong, young models, her Nuba photos are quite in keeping with the aesthetics of Olympia. Comparing the first two photo books The last of the Nuba and Nuba of Kau, however, you’re struck by the fact that, in her photos of the Nuba of Kau, Riefenstahl carries her stylizing much further, completely isolates the models from their living conditions and photographs them in low angle shots and against the clear sky. This is an unbroken continuation of the aesthetics she operated with in the Olympia films, particularly in the shots of athletes training.

The absence of any critical self-examination

The aesthetic quality of her films has seldom been questioned, but Leni Riefenstahl is still one of the most controversial directors in Germany history. How can we best do justice to her as a person and an artist?

In my opinion, the political function of her Party Rally films, and also of Olympia, is inseparable from the specific, innovative aesthetics of the documentary film. Supported by unprecedented financial resources and directing numerous camera crews, Riefenstahl developed a new form of documentary: not reportage of an event, but a cinematic correspondence to it. These films sometimes fulfil different functions: Olympia presents a purportedly cosmopolitan and efficient “new Germany”, while the Party Rally films glorify the “Führer” Adolf Hitler and create an ideal definition of his image. This includes the relationship to his followers, which is based on submission. Riefenstahl was National Socialism’s most innovative film-maker. Therefore the task is to see the political and aesthetic aspects of these works as one. You could say that the artist Riefenstahl developed what the person Riefenstahl never ceased to deny after 1945.

Riefenstahl was in fact never willing to accept moral responsibility for the films she made during the Nazi period. To what extent did this attitude damage her? 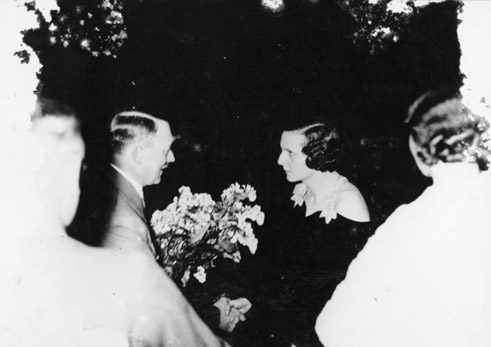 1934: Adolf Hitler welcomes Leni Riefenstahl | © Bundesarchiv Bild 183-R99035 ‎via commons.wikimedia Riefenstahl’s defence strategy always aimed, starting already in the first interrogations by the US Army, at emphasizing her personal innocence. At the same time, she denied closer contact to the regime, called incriminating documents forgeries and all in all acted the part of an artist unjustly put in the pillory. She spurned questions about the extent to which she could be considered to have profited from the dictatorship, whether her career became possible only through the Nazi films and the generous support of the government. As she saw it, not bearing guilt in the legal sense obviously also meant that she had nothing to reproach herself for in any respect. A kind of moral self-examination, a plumbing of her conduct in terms of possible entanglement and misconduct, never seemed to have come into question. It is this above all, the absence of any critical self-examination, that has negatively determined her image. In particular, for decades she presented her use of interned Sinti and Roma in her film Tiefland only in sugar-coated versions, which earned her in old age a charge of Holocaust denial.

A profiteer of the dictatorship

Does the predominantly negative perception in Germany after 1945 of her person and her films differ from the reception in other countries? Is Riefenstahl “more appreciated” abroad than she is at home?

The particular form of the films, at any rate, their aesthetic significance for documentary (and for propaganda) film, was seen earlier and more clearly abroad. By the way, seen by feature film directors as well as documentary film-makers. Especially the former group has learned from Riefenstahl’s stagings and quoted them in their works, as has, for example, George Lucas in Star Wars (1977). In Germany, by contrast, the controversy over her person has dominated the discussion for decades. This is understandable, because Riefenstahl’s persistent denial of irrefutable facts became a scandal. Her Memoirs (The Sieve of Time: Memoirs of Leni Riefenstahl), which exclusively serve her own legend, positively demanded criticism and correction. Since the late 1990s now the study of her life and work in Germany has noticeably changed and research that has evaluated many unknown and previously unconsidered documents has set it on a solid foundation.

What documents enabled a differentiated view?

To begin with, Riefenstahl’s own picture of her great distance to the regime were corrected not only by Goebbel’s diaries, but also by information about meetings, including meetings with Nazi politician Julius Streicher, which prove the comparatively close contact she cultivated to the new rulers. She appears as a profiteer of the dictatorship, who was even supposed to be given her own studio paid for at government expense. It also became apparent that Riefenstahl’s post-1945 defensive stance, aimed at exoneration at any price, found a certain correspondence in the public attitude. It was all too easy to use her as a figurehead on whom self-righteous criticism could be poured. The criticism of Riefenstahl often harboured a holier-than-thou exoneration of all the less prominent collaborators and profiteers. 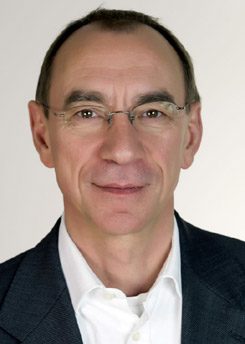 Rainer Rother | © Berlinale Rainer Rother holds a doctorate and is a media scholar and a film journalist. Since 2006, he has been Artistic Director of the German Cinemathèque in Berlin and head of the Retrospective of the Berlin International Film Festival. In 2000, he published the biography Leni Riefenstahl: Die Verführung des Talents (Leni Riefenstahl. The Seduction of Genius).

Andreas Kötzing works as an historian and freelance journalist. He is a research associate at the Hannah Arendt Institute in Dresden and lecturer at the University of Leipzig.