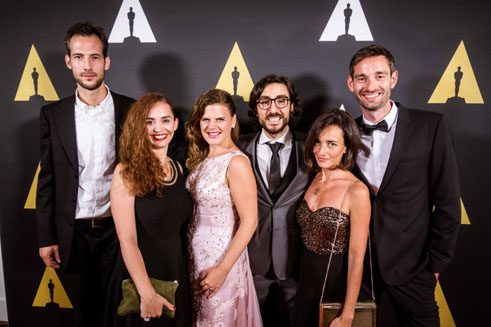 The Max Ophüls Prize, First Steps Award and most recently even the gold Student Oscar – Ilker Çatak has already notched up more than ten awards for his graduation film “Sadakat” (2014) from the Hamburg Media School. After the latest award ceremony in Los Angeles, it was straight off to Japan for the film director, who was born in 1984. By invitation of the Goethe-Institut Osaka he took part in a panel discussion at the Shorts-Shorts Festival there, as well as a film screening in Kyoto, and he led a workshop for school students. In this interview he talks about working on his award-winning film, his experiences in Hollywood and his plans for the future.

Mr Çatak, congratulations on your Student Oscar! You’ve just arrived from Los Angeles. What did you experience there? Was the award ceremony similar to the Oscars in February?

Thank you! The award ceremony is definitely smaller and it’s not like the Oscars in that you have five nominees and one of them wins. Bronze, silver and gold prizes are awarded one after the other – so it’s relatively down-to-earth, as if the Academy’s saying: “OK students, you’ve got this far but make sure you keep your feet on the ground.” We had events organised by the Academy throughout the week in the run-up to the ceremony. The Academy is made up of 6500 to 7000 members. We got to know some of them. It must have been clear right from the start that we were getting gold, but they all put on their poker faces. We had no idea right to the end. There were also a few panels where they took us down a peg or two. It isn’t the case that you go there and everyone’s waiting for your movie script. Neither do you approach the relevant contacts directly as you do in Germany, you work with a network of intermediaries. We spent a whole day discussing this aspect of business. Then there were meetings with creative artists – a producer, a director and a make-up artist – which was very exciting. But of course one of the best things was the discussion with other film-makers, getting to know the people behind the work.

“Sadakat” portrays a very realistic picture of the democracy movement in Turkey. There were several draft film scripts for it. What were the other draft versions like, or why did you finally decide on this story?

The reason why we ultimately agreed on this version is quite obvious: for one thing it’s exciting, for another it was a draft in which each character has justification and also their actions are logical. We understand why Asli hides the activist. We understand why the activist goes on the streets. But we also understand why the husband betrays the activist. In my view, that’s exactly what makes a good story. When you don’t know exactly: “Who’s right? Who’s wrong?” Moral dilemmas – just like in real life. A black and white situation simply doesn’t exist.


What was the filming in Turkey like? Did you just walk into the demonstrations without an official filming permit?

Of course we had a filming permit. Admittedly not for the demonstrations. That was pure coincidence. We just happened to be there after the presidential elections when people were on the streets. So we didn’t stage it, we just spontaneously went along with it. And yes, the film gods were on our side for this shooting. There were one or two moments when officials approached us. Then things turned a bit dicey because we weren’t sure whether we were allowed to film there. After all, it’s still the country that has the highest number of imprisoned journalists in the world. But it all turned out OK in the end.

How did you come up with the theme? Did it have personal relevance to you?

When the Arab Spring suddenly arrived in the place I went to school, where I have family, I looked at it in a completely different way. A completely different feeling towards the events that had also happened in the other countries. That was 2013. Back then I used to post a lot on social media, take part in demos in Germany – the upshot of this was that people I knew wrote to me and said that I didn’t understand the situation, that they needed stability – and: “It’s OK for you in Germany!” It hurts to hear things like that. On the other hand it made me want to do something about it, and it was this need to act that gave rise to the film.

You just said that it hurt – does that mean that you identify clearly with both cultures and countries yourself?

Yes, I am really lucky to be both German and Turkish. And I really believe that it’s a good fortune to have two identities. We moved to Turkey when I was 12. The first six months were pretty horrific: a new apartment, a new school. Suddenly you have to wear uniform and a tie. We were also a bit rebellious in Germany – we wore baggy trousers and listened to rap music – being there soon set me straight. But when I came back to Germany after eight years, I missed Istanbul. I came back to Germany and no one was out on the streets any more by 6 pm. I felt as though I was in a village.

The theme of “cultural identity” is also the theme of two of your earlier works, the documentary film “Mehrzahl Heimat” (2007) and the short film “Ayda” (2008).

Mehrzahl Heimat came into being during my first degree course. I asked myself why the word “Heimat” (homeland) has no plural, as well as seeking to trace the roots in my own family: from the first generation that came in 1960, through their children and children’s children, right up to the generation that’s coming to Germany at the moment not to look for work but just for a change. The situation has changed as a result of the refugee crisis, but in fact the immigration figures have been continually falling over the years since 2000. More people have returned to their homeland than have come to Germany. That’s also a fact that is often not mentioned. Ayda on the other hand is a surrealist black-and-white film. It’s about a woman who buys half a loaf every morning and then sits in the bakery waiting to see who buys the other half. Then she follows the people and paints their portraits. It’s rather a crackpot story.

Could you say that this is a central theme of your work, or does that just apply to these two films?

I just believe in the principle: if you want to be a good film-maker or a good artist, you have to be personal. My most heartfelt film in this context was probably the film with my father Als Namibia eine Stadt war (2010). It has a very unique sense of humour and is very precise even with its limited resources. We produced it for 200 Euro back then and went out to travel the world with it. A film critic saw the film at a festival and was so inspired by it that he included my father in his list of the ten best actors of 2010 – which included people like Robert DeNiro. A hidden actor in my own family. That’s essentially what’s so good about film-making. It opens your eyes to your surroundings. To what’s happening around you.

How did you get into film-making?

If I’m honest, I started out studying business economics after my Abitur, but I didn’t really like it so I went to the job centre. The man there asked me: “What do you love in this life? What are your hobbies?” I answered: “I like going to the cinema.” And he said: “Then look for something in that field!” Then we did an internet search together, and a week later I had my first job. Then I branched out on my own for the first time with Johannes Dunker, a good friend. Eskimofrosch (2005), our very first short film, won a prize straight away. We filmed that one in Istanbul too, on the ferry. First day of shooting: the ferry. Ten years later the circle was closed with Sadakat. Our first day of shooting was on the ferry again. As it turned out, this was a good omen.

The ferry scene, the balcony – those are also examples of peaceful moments in the film “Sadakat”, which serve as an interlude to the main storyline. How do you approach your work?

Yes, it’s important to change the pace. I was a percussionist for a while, and I always beat out my films according to tempo. The rhythm is really important in film. As it is for setting the scene, incidentally. Christian Petzold once said on a panel: “There are three types of film-maker: the poet, the musician and the artist.” And I think I’m the musician.

In which area are your next projects? Are you planning a move to Hollywood?

Lennart Ruff, who won last year, is actually shooting his first film in Hollywood at the moment. But right now I still have a few projects to finish off in Germany: two adaptations of novels – teen books that funnily enough have been awarded a literature prize in the same year – and a film I’m writing myself. I’ve had even more offers and it’s nice to enjoy such popularity, but you also have to be careful. It’s like a good dialogue: at the end of the day it isn’t what’s said that’s important, it’s what isn’t said.

However what’s definitely important to me for the future is finding good people – “soul mates”, with whom I can do projects. I’m glad to know Georg Lippert, Florian Mag and Alexandra Staib, the core team that worked on Sadakat, and I’d like to do something with them again. The most important thing is to work with people who are on the same wavelength when it comes to telling a good story.

Franziska Kekulé conducted the interview. She is an editor at the Goethe-Institut Tokyo.