Right-wing Extremism in Cinema
In a Blind Frenzy 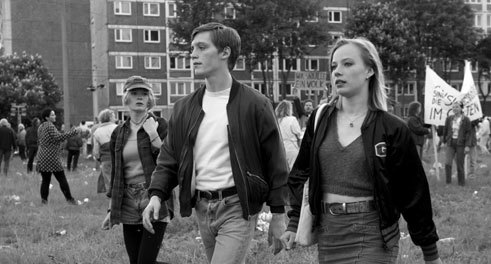 Contemporary German cinema depicts the young right-wing extremist scene as a world full of excess and alluring camaraderie. In some cases, the political aspect falls by the wayside.

The film begins with a crude sex scene and ends with a memory of being gently embraced by her grandfather. In the 2011 film of the same name, one of the Combat Girls is young Marisa, played by Alina Levshin. The narrative parentheses employed by director David Wnendt appear to explain how Marisa was able to become a violent right-wing extremist: from her skinhead boyfriend she learned about excess and from her seemingly so affectionate grandfather tenderness, but also a hollow and rudimentary form of militarism and xenophobia.

Writing in epd Film magazine about the way this phenomenon is dealt with in films, the critic Rudolf Worschech noted that “there is always something intoxicating about being a member of a right-wing extremist gang – as if the directors wanted to imply a state of reduced intellectual consciousness”. But does this not entail a risk that the phenomenon will be trivialized? Is a blend of youthful hormonal excess, lack of direction and poor upbringing really a satisfactory explanation for a xenophobic political ideology?

Contemporary German films about young right-wing extremists are all based on intensive research. David Wnendt conducted numerous interviews with women in the far-right scene, while Martin Behnke, who wrote the screenplay for Burhan Qurbani’s We Are Young. We Are Strong. (2015), compiled a background dossier comprising more than 70 pages in which he outlines the causes and sequence of the events which took place in Rostock-Lichtenhagen in 1992. Following a spate of riots there one night in August – as Behnke describes – several hundred youngsters, urged on by over 3,000 bystanders, set a building on fire in which former Vietnamese contract workers had been housed. The police had already retreated and the mob prevented the fire brigade from reaching the building.

In their film, Qurbani and Behnke portray not only perpetrators but also victims: young extremists who pin their ideology to their chests like a status symbol devoid of any real content, just so as to have at least something to hold onto amidst the economic confusion of the post-reunification years – and they tell of the Vietnamese whose new home is transformed into an inferno. Yet even this film, which is clearly keen to paint a nuanced picture, cannot resist compressing the political element into a fanaticized Fuhrer figure and depicting the attack itself as an intensive experience during which fire, guitar riffs and stylized slow-motion sequences blend into one another. Trailer: “We Are Young. We Are Strong.”, (vimeo.com) | © Zorro Film

From documentary film to fiction

Nonetheless, contemporary feature films on right-wing extremism can be read at least in part as journalistic works. For all their narrative style, they are also bound by the principles of research and documentation. It was only around the turn of the millennium that German cinema permitted itself at all to adopt a noticeably more fictional view of the scene – after documentary films such as Thomas Heise’s Jammed – Let’s Get Moving (1992) and Winfried Bonengel’s Profession: Neo-Nazi (1993) had faced vehement protests because the filmmakers had consciously decided against including any commentary that would help put the events into context.

The Deutsche Film- und Medienbewertung (FBW) in Wiesbaden (FBW), which rates films and can award certificates such as “valuable” and “particularly valuable”, also came to the following conclusion for Oi! Warning (1999): “Thus the depicted violence is not at all about possible ‘educational effects’ but about portraying an actual propensity to violence in the lives of young outsiders that is constantly ready to flare up.” This feature film by Dominik Reding and his brother Benjamin uses expressive black-and-white footage to show the odyssey of young Janosch from Lake Constance who finds himself caught up in the intoxicating skinhead subculture in Dortmund. The directors also drew inspiration from a pioneering film as the 1992 Australian production Romper Stomper (directed by Geoffrey Wright).

Perhaps this tradition of filmmaking is also one explanation why many tales of young right-wing extremists even today still place greater emphasis on the wild, spontaneous and reactive aspects than on the political. In films like Fuhrer Ex (2002) by Winfried Bonengel or Kombat Sechzehn (2005, no English title available) by Mirko Borscht it is also gestures of protest and more or less helpless responses to experiences of violence and disorientation which drive young people into the arms of their right-wing seducers. In all cases it is more about joining a group of fellow humans rather than signing up to an inhuman ideology.

However legitimate and individually revealing all these narratives may be, they nonetheless remain mere snapshots of life. The right-wing spectrum in Germany nowadays extends from that which is termed “radical centrism” – right up to openly terrorist organizations such as the National Socialist Underground (NSU), which spent years carrying out targeted killings throughout Germany. It is precisely such studies of the scene or action-packed cinema films that are unable to chart these complex developments which right-wing ideology has undergone in society, however. What is needed are stories and reports which are equally determined to explore the ideological content of extremism and its violent manifestations.