Sexualised violence on the film set
“If it hasn’t been agreed, it’s not okay!”

They all attended a casting call in 2015 at which abuse took place: the five actors in Alison Kuhn’s new film “The Case You”. Some of the women involved back then are now taking legal action over the misuse of their image rights. | Photo (detail): © mindjazz pictures

Abuse at castings, unannounced rape scenes during filming: the film industry is by no means free of sexualised violence. The new movie directed by Alison Kuhn shows what that does to the parties involved: in “The Case You”, five women who suffered abuse of this nature relate their experiences.

Ms Kuhn, how did you get the idea to film “The Case You”, a movie about sexualised violence? 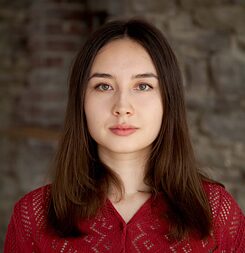 Alison Kuhn is an actor and is studying directing at the Konrad Wolf Film University of Babelsberg. She has already made a name for herself with several films – in particular the multiple award-winning film “The Case You”, in which the issue of sexualised violence in the film industry is discussed, and about what this experience does to the women affected by it. The film is in cinemas from 10th March 2022. | Photo (detail): © Christian Zipfel I was invited to a casting call as a young actor, like hundreds of other young women, where at times serious assaults took place. Firstly many of the applicants were touched without consent during the casting call, and in some cases even hit, and on top of that the casting material was edited into a “documentary” without consent. So you might say it was a double abuse. Then some of the affected parties decided to take legal action over the misuse of their image rights.

Were these women supported by anyone?

The “crew united” platform did all they could to help link the victims through a Facebook network. This was also how I got to know the women who have the opportunity to speak in my film. But what triggered me to make the film was something different.

So what was the trigger?

At my entrance examination for the film directing course at the Babelsberg film school in Potsdam, someone who had been present at that horrible casting call recognised me. That stirred up a lot of emotions in me, and they had to go somewhere. I felt as though I was paralysed. In the end I said to myself: “If I’m successfully accepted here, then I’m going to make a film on this subject.” It was good to be transforming an unpleasant thing into something constructive – and suddenly I had plenty of energy for the exam again.

The #MeToo movement continually addresses the issue of situations involving abuse on film sets. Does the film industry make it easier for structures like this to exist?

Wherever there are rigid hierarchies, there is structural power. In this respect the film industry is no different to the corporate environment, for instance. A film set is structured on a hierarchical basis, and needs to be in order to function – but that’s also the breeding ground for the misuse of power. Admittedly it’s not true to say that this could only happen to young women. It can affect men or older female actors just as much.

Did this experience influence you as a film director?

Obviously I now have a much clearer understanding of the fact that as a director you have to handle your responsibility very carefully. This work has a lot to do with trust. My own experiences have increased my awareness and made me more mindful of the warning signs.

How was your film received in the industry?

There was very good feedback from all sides. Many people are delighted that the subject is being addressed – I don’t think there had really ever been a film about this in Germany before. And of course lots of people come to me and want to tell me about their experiences as well. I’ve started something – there is more dialogue, more networking. Of course, what I’m especially thrilled about is when my director colleagues say that they are approaching casting calls differently as a result.

Why do people tolerate abusive behaviour in these settings – after all there’s an audience present?

One of my protagonists in the film for example relates how it wasn’t an option for her to call a halt. The thing is, that was the brief from the start: “There’ll be no cuts here!” A very clear power imbalance was created at that point. The reality that an entire film production team was present at this casting call lent the whole situation a strong dynamic. One of the actors involved said that she experienced it almost like a group assault, because lots of people were there and no one had her back when she was unable to defend herself.

Does it also put you in a difficult position because you’re hoping to achieve something as an actor?

Exactly, it’s like a job interview. A lot depends on it. Your career, your rent, subsequent roles and much more. Of course things work like that in many other industries too.

Milena Straube is one of the actors to tell her story of the casting call in 2015 in “The Case You”. The actor has been involved in diverse theatre and film productions since then. | Photo (detail): © mindjazz pictures On top of that, women in film often have to deal with extreme situations anyway, where boundaries can quickly become blurred.

Yes, it’s sometimes unclear what’s reality and what’s acting. The artistic intention is not necessarily apparent from the outset – especially when you’re right in the middle of the scene yourself. I think things were far more extreme in the past, far more authoritarian. They still had this idea that the director was some kind of genius. For example there’s the film The Last Tango in Paris, in which the female actor was surprised with a rape scene so that she showed an authentic reaction. Along with everything else that’s wrong about it, it also sabotages the acting profession – after all actors are specifically trained to portray something, and they are familiar with their tools to do so.

What can you do as a director to avoid upsetting experiences like this?

You have to define the boundaries very clearly right from the start. You can do everything – as long as it’s communicated in advance. If it hasn’t been agreed, it’s not okay! Empathy is important. And it’s important to meet every team member on an equal footing.