This time, the Goethe-Institut and radioeins from rbb are building the Radio Bridge across the Atlantic as part of the Germany Year USA - and to two vibrant metropolises at the same time. From October 9th to October 12th 2018, radioeins will broadcast five hours a day from the Goethe-Instituts in New York and San Francisco. The reporters will focus on the diverse political, social and cultural situation in the country, German-American relations and the changes currently taking place. 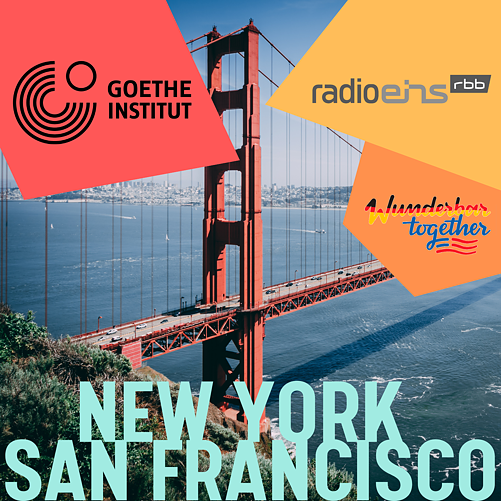 Germany and the USA share a common history that goes back centuries. The Radio Bridge aims to trace the multifaceted ties between the two countries and capture a picture of the current political tendencies.. For the first time, the radio bridge will take place simultaneously at two locations and within the framework of the Germany Year USA. The US influence in Germany is omnipresent in pop culture and film, but just as interesting is the transformation the huge country is currently undergoing. Radioein’s reporters uncover what unites the two US metropolises and the German capital and what sets them apart. Interesting interviewees from politics, business and culture from both countries will be invited to the radioeins studio in both Goethe Institutes. In San Francisco, special emphasis will be placed on the rich cultural scene.

German-American encounters at the East and West Coast

From October 9th to October 12th , the Goethe-Instituts in New York and San Francisco will host and broadcast the latest Radio Bridge. In times of political upheaval, everyday life behind the news reality becomes audible twice over.

radioeins live from New York - daily 4-7 p.m.
Every day from 4 to 7 p.m. CET radioeins will broadcast from the Goethe Institute in Manhattan. Everyday life in the bustling metropolis between glamour and gentrification and the political situation under President Donald Trump is examined by the radioeins team. ARD correspondent Martin Ganslmeier, for example, looks at the upcoming "mid-terms". In the series "As a German in New York",  people who have come to New York to live their dream have a say: from start-ups to kebab sellers. And the young family father Felix Zeltner tells us what it's like to go on a world tour in New York: For a year he lived with his family in a different neighbourhood every month.

The radioeins reporters plunge into the life of the city - inspecting the Trump Tower, reporting on the difficult situation of taxi drivers as well as on New York's toughest basketball court. Also invited to the temporary radioeins studio at the Goethe-Institut are prominent musicians such as We are Scientists and ex-Youth of Today singer Walter Schreifels; plus there will be lots of music from the city's diverse music scene.

radioeins live from San Francisco - daily 7 - 9 p.m.
The radioeins studio at the Goethe-Institut San Francisco takes over from 7 to 9 p.m. CET and transports listeners to the US West Coast. From the hippie music of the late 60s to current music from San Francisco - the sound and the attitude to life in California are important topics for the radioeins team: What is it like to live in a city where you can no longer get a room in a shared flat for less than 1500$? How much are the new rich from Silicon Valley changing their environment? And is it difficult to find Trump supporters in the Bay Area?

FROM THE ACROPOLIS TO THE GOLDEN GATE BRIDGE

The Radio Bridge established itself as a successful format back in 2014. At that time, it was broadcasted from the Goethe-Institut São Paulo in the run-up to the Football World Cup in Brazil and used interviews, reports and features to paint a profound, multi-voiced picture of the metropolis and its inhabitants for listeners in Germany. In 2015, a Radio Bridge followed in Athens. At the height of the debt crisis, the reporters captured Greek opinions about Germany and addressed the situation of refugees on the Mediterranean. A similar juxtaposition of political unrest and vibrant culture was also conveyed by the Radio Bridge Istanbul (2016). In addition to the effects of the refugee agreement between the EU and Turkey on everyday life on the Bosporus, the focus was on an art scene between tradition and modernity. In 2017, the programme was broadcast from the newly renovated library of the Goethe-Institut in Warsaw. The focus was on German-Polish relations regarding the theatre scene, urban development, music and politics. Populism and Chopin were covered as well as the LGBTQIA+ scene and an insight into the work of a German-Polish garden association.

Radio Bridge is broadcast live by Rundfunk Berlin-Brandenburg (rbb) from the Goethe-Instituts in New York and San Francisco.

This project is part of the initiative "Germany Year USA 2018/19" - funded by the Federal Foreign Office, implemented by the Goethe-Institut and supported by the Federation of German Industries. More information at www.wunderbartogether.org.