After three successful radio bridges in São Paolo, Athens and Istanbul, the Goethe-Institut and radioeins from rbb are this time building the "radio bridge" to Warsaw from October 16th to October 19th. Live from 4 to 7 p.m., the reporters will track down stories from the Eastern European metropolis and capture the pulse of the times through interviews, contributions and videos. 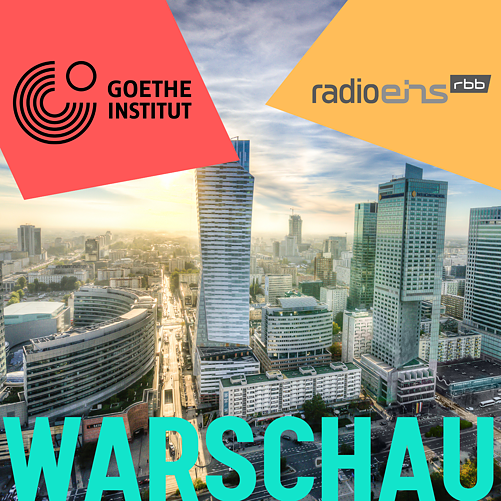 Populism and nationalist slogans are currently calling the European idea into question in many countries. Euroscepticism is particularly pronounced in Poland. How is society and everyday life in Poland changing in the face of these current political events? And how are cultural workers dealing with these issues? Due to the increase in national-conservative tones, radioeins asks about the effects of the widespread criticism of Europe in Poland, focusing especially on the city's cultural scene. Once again, artists, journalists and citizens will draw a picture of the current mood in the city.

From October 16th to October 19th the Goethe-Institut Warsaw will be the host and, with its library, the broadcasting studio of the latest Radio Bridge. Once again, in times of political discord, an everyday life behind the news reality becomes audible. The reports and interviews focus on German-Polish encounters, such as a visit to a German-Polish couple in Warsaw. In addition to the discussion of bilateral clichés, there are also discussions of the lively cultural scene of the metropolis: Polish film is currently experiencing a renaissance and Warsaw is at least as good a place to party as Berlin.

From Acropolis to the Bosporus

The Radio Bridge already established itself as a successful format in 2014. Back then, in the run-up to the World Cup in Brazil, it was broadcast from the Goethe-Institut São Paulo and used interviews, reports and features to paint a profound, multi-voiced picture of the metropolis and its inhabitants for listeners in Berlin and Brandenburg.

A Radio Bridge in Athens followed in 2015. At the height of the debt crisis, the reporters captured the opinions of Greeks about Germany and addressed the situation of refugees on the Mediterranean. A similar juxtaposition of political unrest and vibrant culture was also conveyed by Radio Bridge Istanbul (2016). In addition to the effects of the refugee agreement between the EU and Turkey on everyday life on the Bosporus, the focus was on an art scene between tradition and modernity.

Interview with the director of the Goethe-Institut Warsaw Christoph Bartmann

Interview with Ola Boczkowska of "Love does not Exclude"

Warsaw Palace of Culture and Science

In the footsteps of Frederic Chopin