What makes the Latvian capital Riga so special? How has the war against Ukraine changed life in Latvia and the relationship with Russia? What is the country discussing one week before the parliamentary elections? What do the people there expect from Europe and from Germany? And what is it actually like to live in the Latvian capital? radioeins and rbbKultur are building a radio bridge to Riga together to explore these questions. 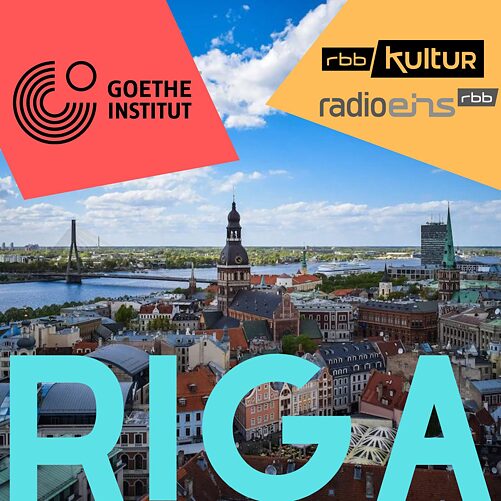 Radioeins and rbb Kultur broadcast live daily from the Goethe-Institut Riga, the Latvian capital, from September 26 - 29, 2022. Together they told about the people who do politics, art, music, city planning, clubs or cafés in Riga.

With around 630,000 inhabitants, Riga is the largest city in the Baltic States. It is a particularly diverse city, as Latvian, Swedish, Ukrainian, Polish, German and, last but not least, Russian influences come together here. More than thirty years after Latvia regained its independence, the Russian-speaking population still makes up a good 40 percent of Riga's population.

The relationship between Latvian-speaking and Russian-speaking culture has repeatedly been a major topic of discussion at Radiobrücke. As a result of the war in Ukraine, for example, many monuments from the Soviet era were dismantled in Latvia. Can the coexistence of cultures work despite the tensions? What role do origin and language play in coexistence? Radioeins host Knut Elstermann and the rbbKultur moderation team Andrea Handels and Jürgen Buch talked about this.

In addition, rbb reporters Max Ulrich and Katja Weber went on a tour of the city's Art Nouveau neighborhoods and markets. They tested traditional and new Latvian cuisine and learned from teachers and students of the Goethe-Institut what makes Latvians tick.

Of course, the music from the Latvian capital was the soundtrack of the Radiobrücke! Enjoy the films from Latvia!

Please note that the following contet is only available in German.

The Goethe-Institut in Riga transforms into a studio

A trip to the beach of Jurmala

A visit to the Žanis Lipke memorial site

You can find further information here: