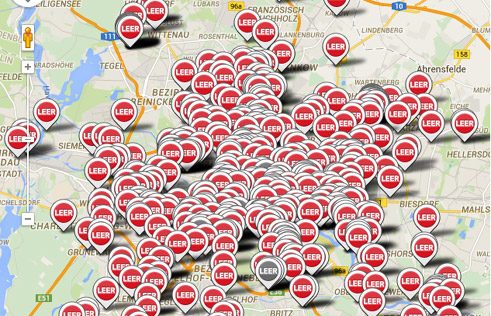 Behind each red spot lies in fact a vacant building. | Screenshot (detail): © leerstandsmelder.de

More and more people want to use urban space for their own projects. At the same time, many buildings stand vacant. Interim use agencies seek to broker between owners and interested parties. It is not always easy.

For one tiny instant, the map of Berlin looks like a perfectly normal map at Google Maps. Then, suddenly, hundreds of thick red dots appear, spreading over the entire city centre like a carpet. On each dot is emblazoned in upper-case letters the word “VACANT”.

“The map of Berlin isn’t even particularly dense. In Hamburg or Frankfurt it looks far more dramatic”, says Michael Ziehl. The architect and city planner is a co-founder of leerstandsmelder.de, an online data pool for vacant properties. Behind each red spot lies in fact a vacant building, reported by one of the users of the portal. “We don’t really have too little space in our cities”, says Ziehl. “The space is there; what we lack is access.”

The red-dotted city maps of the “vacancy detector” furnish a good introduction to what has now become a rather complex discussion. More and more city dwellers are developing a particular need for space. People in the cultural scene are looking for studios, start-ups for offices and social initiatives for venues to realize their ideas for project. A new desire to design their own urban space is rife. Why let abandoned land in the middle of the city run to seed when you could plant there a community garden? Why pull down a ramshackle but beautiful Gründerzeit building when there are people who would like to turn it into a cultural centre?

Temporary use as a win-win situation?

There is a solution to this problem. It is called temporary use. Vacant buildings are rented on favourable terms for a previously agreed upon period. The owner can generate revenue, the tenants have access to inexpensive rooms. And the city too is satisfied, because fewer vacant buildings mean more protection from neglect. This sounds very reasonable and very elegant – a situation in which more or less all parties can profit. So where exactly is the catch? Why do we still see so many red dots on the maps of the vacancy detector?

“There is a win-win situation here, but it’s not so easy to bring about as it seems at first glance”, explains Michael Ziehl, who in addition to his engagement in leerstandmelder.de runs an agency for city planning that brokers between users and owners, city authorities and investors. “You might suppose that every owner would be interested in renting a vacancy as soon as possible. But that’s not always so.” Temporary rental of vacancies on which owners enjoy tax benefits makes no sense in economic terms. Moreover, empty buildings are far better objects for speculation. And apart from this, there is a great fear that temporary use of a property may cause a loss of value.

Victims of their own success?

Even if owners enter into the deal and open their vacant buildings for temporary use, this arrangement is also now the subject of controversy. Is what at first looks like a win-win situation not in fact a trade in which in the end only one party profits: the investor, whose building the interim user reanimates and makes interesting again for the market? Temporary use, argue its critics, plays exactly into the hands of the displacement processes of neo-liberal urban policy, which is what it is supposed to counter: a quarter becomes more popular, rents rise and finally precisely those who have initiated this development must go. The interim user, critics say, then becomes the victim of his own success.

Can this contradiction be resolved? Yes, according to Daniel Schnier of the ZwischenZeitZentrale Bremen (ZZZ Bremen) (i.e. InterimTimeHeadquarters), an agency for brokering the temporary use of vacant buildings. “There’s more scope for action than you might think”, he says. But Schnier too of course can tell of cases in which interim users were shocked to have to give up in the end a successful project. “That’s simply the way it is with temporary use. After a space of time the creative people must move on.” On the other hand, from the initial time span can develop longer-term models. “We’re advising more and more groups of tenants who are negotiating with owners to buy a property so that in the end they become themselves the owners.”

Michael Ziehl also sees definite opportunities to escape the mechanisms of the market. “Ultimately, it’s always also a political decision that creates conditions for models of temporary use.” These models include, according to Ziehl, those that in fact go beyond the merely temporary use of urban space. “We now see more and more projects which, although started under the label of interim use, have then developed and go beyond the merely temporary use of buildings.”

Ziehl therefore calls for avoiding the term “temporary use” if possible when talking of concepts for creative re-appropriation of urban space. The decisive factor, he says, is not at bottom the time period of the projects, but rather that here the citizens themselves are driving the development. “Investors and project developers don’t come into it.” Instead of interim use he would therefore prefer to speak of “user-supported developments”, and instead of temporary spaces of “second-hand spaces”. “It’s really supposed to be about establishing good projects in a place for a longer term.”

Daniel Schnier of ZwischenZeitZentrale Bremen is of the same opinion. But he also sees the difficulties. Many municipalities are not yet aware of how much they benefit from such user-supported developments. “Here in Bremen we have pioneer projects promoted together and in constant communication with all the stakeholders. These projects have done excellent cultural work.” Cultural work that, as he emphasizes, is no longer done by many municipal facilities. “We ought simply to consider how useful it is to demand rents from these people in user-supported developments.”