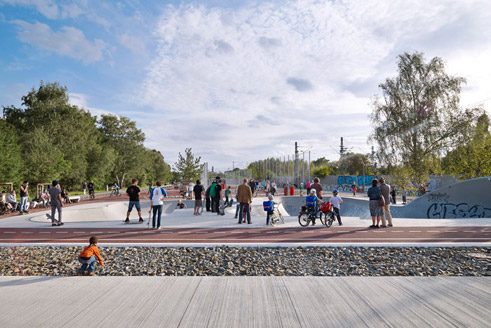 The future of urban planning involves many issues, not surprisingly since it straddles architecture, art, public planning and civic commitment. A discussion with curator Francesca Ferguson on an alternative approach to urban space.

Make shift stands for a temporary, purposeful replacement for something that is absent. The term arose in a crisis context and signifies finding the most intelligent solution when resources are scarce. You take what you have and improvise with it. Meaning a shift, a re-interpretation. In the Make_Shift City project I related the shift to urban practices, to architecture planning and the design of urban space. In the book accompanying the project, artists and designers concern themselves with re-designing, re-interpreting the city as urban commons. In other words, make shift implies a form of redirecting things and is permanently emerging.

What resources did you have in mind exactly?

With resources I mean primarily the common land, particularly the urban space, which is stealthily being privatized and fenced in, something we tend not to notice. Wherever more rules control and restrict people, their movements and where they can spend time. But I am also referring to those resources which citizens insist must be publicly owned in cities. This is what the term commons refers to. Electricity and water utilities, as well as forests. We are talking of discussion at the European level. On the basis of the climate of recession following the 2008 financial crisis, the inquiry into the urban commons that we all share and which belong to us has become increasingly important. It is also important to learn from other cities and borrow intelligent solutions.

Are there clear examples of this inquiry?

A prime example is Tempelhofer Feld in Berlin. A huge former airport for which there was an urban concept which envisaged careful developments in a huge swathe of countryside with a park and buildings on the perimeter. However, citizens want Tempelhof to remain the way it is, namely a huge green zone in the middle of the city. In a referendum they voted against the urban construction plans. That is an example of negotiating the commons, of commoning: People join together, make their opinions known because they feel that “this terrain belongs to us and should remain as free of rules as possible” – as an ideal state. This shows that we are now in a virulent discourse between groups of citizens.

How are communing and make shift actually translated into urban space?

Citizens, architects, planners, landscape architects, artists are taking things into their own hands and increasingly often deciding themselves how they want to live together, for instance in communal initiatives such as a “multiple dwelling”, in a multigenerational house or in a gay and lesbian housing project. There are very interesting models at present. The primary aim is to develop housing for people with low income. The parameters of usage shift, in other words. That’s another instance of make shift. As such it addresses not only the urban commons, but goes further – it is also a very important aspect of our Make City Festival in June 2015 in Berlin: For whom are we actually building residential spaces? Are we heeding new and different family structures such as patchwork families? Are we building for different social conditions?

How do you negotiate these issues at the Make City Festival?

The festival has a participative structure. We have over 100 founding partners who provide money and also help shape the festival’s face – designers, communications companies, architectural offices. They participate in the international discourse platforms on such core issues. There are centres scattered throughout the city, we call them urban hubs, that host the conferences, for example Deutsches Architekturzentrum. Architectural offices will be holding studio talks in their own spaces. Within the Make City open format architects, designers and urban sociologists can offer guided tours of the city. At Technische Universität Berlin there will be a conference on urban commons, and an exhibition curated by AA Projects’ Kristien Ring that will address the topic of the self-made city. The idea behind Make City is to bring together the immense diversity of discourses, to reflect on new types of living/working (at both the smaller level of multiple dwellings and at the larger one of housing societies) and to identify residential and work models.

What are the major challenges to ensuring that the “make shift” models for life in the city of tomorrow function sustainably?

This type of spatial practice and participative processes requires a great deal of dialogue and communication. Including among the players and urban designers, the architects, planners and designers. That is exactly the discourse we are interested in. If property developers come up against civic groups they tend to shy away. Meaning that architects and process developers who think differently must reach out to precisely those developers and show them how committed civic participation in urban development can also have positive results. It is not a simple process; it is arduous, and sometimes it fails. Even in the case of the smallest unit of communal initiatives, the multiple dwelling, negotiations can be really difficult when it comes to property, as any architect knows. And the architect must then define the boundaries, by skilful design.

Francesca Ferguson is a curator for architecture and urban issues. At the 2004 International Architecture Biennale in Venice she was commissioner of the German Pavilion and from 2006-9 was director of Swiss Architecture Museum in Basel. She edited the book “Make_Shift City. Renegotiating the Urban Commons” and initiated the architecture network “Urban Drift”. Moreover, she is co-organizer of “Make City – the Festival for Architecture and Doing Things Differently” in Berlin from 11-28 June 2015.

Irmgard Berner conducted the interview. She freelances as a cultural journalist in Berlin.

Any questions on this article? Please write to us!