Remembrance
From Collective to Cultural Memory 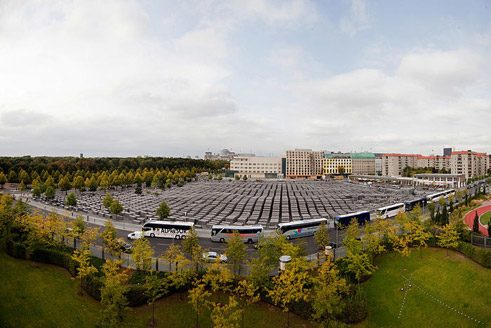 Visible sign of remembrance in the heart of Berlin: Memorial to the Murdered Jews of Europe; | Photo: © Marko Priske

When contemporary witnesses die off, museums, memorials and historical anniversaries come into their own as forums of commemorative culture. In Germany the public remembrance of the Nazi era has become only more intense.

The words of the Federal President Richard von Weizsäcker on the 40th anniversary of the end of the Second World War in May 1985 were unequivocal: “The 8th of May was a day of liberation. It liberated all of us from the inhumanity and tyranny of the National Socialist regime”. The considerable resonance to his speech, at home and abroad, cannot be explained alone by the turning away from the view of the war’s end as a “catastrophe” to that of its having been a “liberation” from Nazism. Weizsäcker also took up the moving perspective of the victims. And he championed the demanding view that, among the changing claims of the present, remembrance represented an ever new task.

Ongoing reflection on the causes

In his speech the then Federal President addressed two phenomena which, in the following 30 years, were in fact to shape the public commemorative culture of Germany ever more clearly. On the one hand, in the Federal Republic of Germany the 8th of May 1945 came to be increasingly seen as the starting point for the building of a successful democracy. From this the country’s political culture drew a growing share of its legitimation. On the other hand, in the public culture of remembrance – that is, above all in public political commemoration – a pronounced focus on the victims established itself. Here we may observe at this time international parallels, for since the 1990s many European countries had come to take into critical account the phenomenon of collaboration with the German occupying forces and the involvement of local populations in the deportation of the Jews. But in no other European country was the Holocaust and its consequences to become the pre-eminent reference point of national commemorative culture that it became in the Federal Republic of Germany. Of this the Memorial to the Murdered Jews of Europe, completed in 2005 in Berlin, is probably the most visible sign for millions of visitors. In a certain sense it fulfils even the function of a modern national memorial, admonishing all visitors to an ongoing reflection on the causes of the breakdown of civilization in the twentieth century.

The focus on the victims that has prevailed since the 1980s in German commemorative culture, and the associated commitment to sustained self-reflection, can also be seen as the result of a change of generation. Historians of commemorative culture speak in this regard of a transition from collective to cultural memory. The former usually passes quietly and imperceptibly in the incessant rhythm of generational change. Cultural memory, on the other hand, refers to the peculiar stock of texts, images and rituals of any society and any epoch with which human collectives stabilize and convey their self-understanding. Against this backdrop the watershed character of the 1980s is again comprehensible, because then, for the last time yet still loud and clear, members of the generation spoke up in public about their direct memories of the Nazi dictatorship. With their deaths, however, more and more mediators appeared on the scene so as to determine what should be included in the cultural memory of the nation. In the course of medial change, museums, libraries and memorials, but also a growing number of historical anniversaries, have increasingly come into their own as forums of the social self-understanding of current commemorative culture.

Breakpoints in times of accelerated change

Characteristic of this development in Germany is that, since the 1980s, public commemoration on the 8th of May, and so also of the history of the Third Reich, has not declined but rather even intensified. This has been emphatically reflected by the ceremonies for public days of remembrance on 27 January (the day on which the concentration camp Auschwitz was liberated), 8 May (end of World War II), 20 July (the uprising against Hitler) and the particularly history-charged 9 November (the November Revolution of 1918, the “Night of Broken Glass” 1938, the fall of the Berlin Wall 1989). In sum, these are calendar breakpoints, which in times of accelerated change give the public the opportunity to come to an understanding of experiences of the past and from this to derive common goals for the future.

An historical approach can also show how strongly radical political and social turning points can transform cultures of remembrance. Most recently this was the case everywhere in Europe in 1989/90: after the collapse of Communist-dominated regimes buried memories returned again massively to the surface, as if in time lapse. For decades these had been marginalized or even suppressed. Western Europe too has been seized by this effect, so that since then commemorative culture both in Eastern and Western Europe has been in the midst of a vast upheaval. The material and symbolic signs of these changes can be seen everywhere. In Germany they are apparent in, among other things, a lively competition between remembrance and memorial sites of the Nazi dictatorshipand those of the East German regime.

Cultures of remembrance therefore cannot, as we can learn from the interdisciplinary remembrance research of recent years, be understood as static group memories. They are rather the result of ongoing political and social processes of negotiation.

Christoph Cornelißen is Professor of Contemporary History at the University of Frankfurt am Main. The international comparison of commemorative cultures is one of his main research interests.