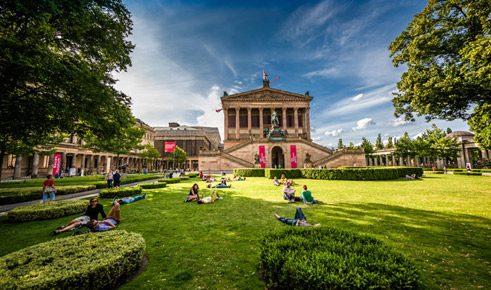 It is the foundation of foreign policy, Foreign Minister Frank-Walter Steinmeier has said of Germany’s foreign cultural policy. In recent years it has undergone a rapid transformation.

Germany’s Foreign Cultural Relations and Education Policy (Auswärtige Kultur- und Bildungspolitik), AKBP for short, has passed through a period of rapid changes and extensions. Once a peripheral area of foreign policy, it has, particularly in the past fifteen years, become what Foreign Minister Frank-Walter Steinmeier has called part of the “foundation of foreign policy”. Outwardly, this development has become visible in two major steps in the organization of the German Foreign Ministry. In 2003 the Foreign Office took over the Foreign Department of the Press and Information Office of the Federal Government and thus made possible the development of a German professional “public diplomacy”. This department of the Foreign Office is now called “Culture and Communication”. In 2015, as a result of the “Review 2014 – Thinking Ahead in Foreign Policy” initiated by the Foreign Minister, he founded a department for “Crisis Prevention, Crisis Management and Post-Conflict Stabilization”. In 2016 this department already had a budget of over 480 million euros, more than a third of the total resources of the Foreign Ministry for foreign cultural policy.

The extension of foreign cultural policy’s remit can be traced to two further developments that took place in the 1990s and led to fundamental changes. Firstly, foreign cultural policy has invested in advertising for Germany. Germany comes surprisingly high in international rankings regarding soft power and the outside point of view. This raises hopes that Germany will benefit from the further development abroad of its image in terms of cultural policy. Secondly, the subject of values plays a much greater role in foreign cultural policy than before. Other countries should not only be convinced that the values of a free, democratic society constitute an essential basis for the development of a country; they should also be shown that these values help in preventing conflicts, or when conflicts have already broken out, in solving them peacefully and constructively.

Recently international comparisons and evaluations have been bringing only good news for Germany: in the annual “BBC Country Ranking”, for example, Germany has taken first place several times; in the “Gallup Ranking 2015” fourth place; and in the survey published by U.S. News&World Report in January 2016 Germany was classified as the “Best Country of the World”. Simon Anholt’s “Nation Brands Index” also listed it in first place, and in Jonathan McClory’s “Soft Power-Rankings” Germany attained second place in 2015 and 2014.

These results should not, however, seduce us into drawing false conclusions. They are snapshots, which the refugee crisis and conflicts over the euro may soon change again. All the more important therefore that German foreign cultural policy should work with solid information, engage in constructive cooperation and carry on sensitive dialogue with other countries.

In the background of all this is the international competition in foreign cultural policy, which has been growing and becoming ever stiffer since the turn of the century. Germany is vying here not only with partner countries in the European Union, but also and above all with countries outside the EU. In this rivalry, China, South Korea and Japan have been participating with increasing success, but also Turkey and Russia. In the space of a few years China has established 500 Confucius Institutes worldwide and intends to increase this number to 1,000. The other countries mentioned also mean to found numerous new cultural institutions abroad or have already done so to some extent.

The work of German intermediary organizations funded by the Federal Government, such as the Goethe-Institut, the German Academic Exchange Service, the Humboldt Foundation and the Institute for Foreign Cultural Relations, has not become easier than before but certainly has become more exciting. As shown by project and programme-related evaluations, all these organizations work with a proven track record. The last overall evaluation, however, is now forty years ago. Especially with a view to the new dimension of German foreign cultural policy, a self-ascertainment with respect to current issues, actors and programmes could afford interesting insights.

Kurt-Jürgen Maaß is former General Secretary of the Institute for Foreign Cultural Relations, an Honorary Professor at the Institute of Political Science at the University of Tübingen, and editor of the manual “Kultur und Außenpolitik” (i.e. Culture and Foreign Policy).