We can listen more to art and literature, because they promote empathy and understanding and act therefore as a protection against totalitarian currents.

In these times, when in large parts of Europe all reason and level-headedness in the political sphere have been flooded and the continent is about to capsize, it is time to listen seriously to the knowledge and truth to be found in art and literature. Because they still exist, the liberal arts, and they are a very special bulwark against the totalitarian undercurrents that threaten Europe today. 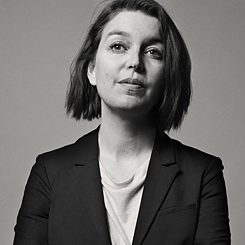 Photo: Marin Vallin © Goethe-Institut Art and literature convey experiences that go beyond the purely rational and the purely emotional. When Herta Müller describes the society of informers in Communist Romania or Elfriede Jelinek the helplessness of refugees, viewers and readers are gripped by what Aristotle calls “fear and compassion”. Together they create catharsis, purification, which it is to hoped leads us to deeper knowledge, empathy and understanding. To humanity.

We should therefore listen when Herta Müller compares a power-hungry statesman in Eastern Europe with the dictator she recalls from her time in Romania. Or when Elfriede Jelinek displays the affairs of the small Alpine republic before the eyes of the general public in the most incisive descriptions of Austrian society that were ever to have been read. Here it should be mentioned that in 2016 in Vienna a performance of Jelinek’s play Die Schutzbefohlenen (The Suppliants), in which all the roles were played by refugees, was stormed and berated by members of the “Identitarian Movement”.

And there are even more reasons today to pay attention to the experiences of writers and artists. In Hungary and Poland, independent artists and journalists are losing their jobs, which benefits party-loyal colleagues. The policy is called “national conservatism”, but it more resembles totalitarian times. Or what else can one say when a free university like the Central European University in Budapest must leave the country, when the authoritarian government views education and global perspectives as a threat?

And in Austria, the ORF, the public television and radio station, is currently being attacked by right-wing populists, an attack that is particularly serious since these right-wing populists, whose ideas are unworthy of discussion and shall not sully this text, form the government with the Conservatives.

Do we really have the post-Communist Europe many of us dreamed of? The Europe of the EU? Yes, do we live in a really post-fascist Europe? A Europe as we want it to be?

Next question:
Are we living in a really post-fascist Europe, a Europe as we want it to be?

Cecilia Hansson (born 1973) is a writer, translator and freelance author living in Stockholm. She holds an MA degree in German Studies, is a member of the board of the Swedish Writers Association and writes regularly for the daily newspaper Svenska Dagbladet about Central and Eastern Europe. In 2002 she made her debut as a poet with the lyrical story Revbensdagar, morgnar. Her fourth collection of poems, Loveprosjekt, arose as a collaboration with the Norwegian writer Inger Bråtveit. In 2017, she published her book of interviews Hopplöst, men inte universell – konst och politik in Centraleuropa (Hopeless, but Not Serious - Art and Politics in Central Europe). In this book Hansson talks to some of the most important European intellectuals, ranging from Herta Müller and Péter Nádas to Marina Abramović and Michael Haneke, to name only a few. The interviews are about the specific conditions of artistic work, but also about larger issues such as the importance of art and the possibilities of artists to influence social debates. The result is a book about survival, resistance, censorship and freedom in a region where there is currently much going on politically that is of great importance to the rest of the world.

Translation: from German by Jonathan Uhlaner