Nikita Dhawan
Austria
Do we really live in a Europe as we want it to be?

The democratizing forces at work in Europe are offset by nationalisms, racisms, and exclusions, so that the promise of a post-fascist Europe reveals itself to be a missed appointment with history.

European claims to global leadership are based on the assertion of moral, technological and military superiority. This conviction is accompanied by a pronounced sense of mission that Europeans have the responsibility to dispense freedom, rights and justice worldwide. Europe as guarantor of world peace and democracy marks a continuity of the “white man’s burden”, namely, the responsibility and obligation of the Europeans to “save” and “enlighten” the rest of the world. The paradox of Europe’s self-perception as a “civilizing force” is that this positive self-assessment is only possible through historical amnesia about the costs of this mission in the form of slavery, exploitation, plunder, genocide and crimes against humanity as well as repeated betrayal of Enlightenment principles of equality, fraternity and humanity. Both scholars of Postcolonial Studies as well as Holocaust Studies question the hollow myth of Europe’s long march to freedom and emancipation and outline a certain “disenchantment” with the idea of Europe. They mistrust Europe’s self-representation as guardians of the Enlightenment. This self-congratulatory stance is contested by bringing to light Europe’s self-barbarization in the form of colonialism and fascism, the legacies of which have enduring consequences for Europe. 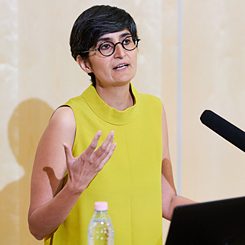 Photo: Daniel Vegel © Goethe-Institut The democratizing forces at work in Europe seem to be constantly haunted by brutal nationalisms, racisms, and exclusions. Europe's others, including postcolonial migrants, Roma and Sinti, ethnic, racial, sexual and religious minorities, pose a challenge to Europe as a reminder and remainder of colonialism and fascism. Europe must face up to the choice between continuing its former trajectory of claiming moral, economic and military superiority or it can rise to the challenge of developing another Europe by being responsible and respectful to difference and alterity. If Europe is able and willing to learn from its historical crimes of colonialism and fascism, the forging of a post-imperial Europe would be a chance and opportunity for a democratic iteration of Europe. Europeans would do well to heed Gandhi’s suggestion: On being asked by a journalist, “What do you think of Western civilization?” Gandhi was reported to have responded, “I think it would be a good idea”.

Next question:
"How can one fight gender and economic injustice worldwide without reinforcing European hegemony and supremacy in the fields of development politics, international cooperation and (women's) human rights?"

Nikita Dhawan is Professor of Political Science (Political Theory and Gender Studies) and Director of the Research Platform Gender Studies: "Identities – Discourses – Transformations" at the University of Innsbruck, Austria. Her research and teaching focus on transnational justice, democracy and human rights. She received the Käthe Leichter Award in 2017 for outstanding achievements in the pursuit of women’s and gender studies and in support of the women’s movement and the achievement of gender equality.