The struggle for economic, political, cultural and gender equality and liberty must be consistent, constant, adequate to each context individually, and needs to create a sense of belonging, unity and emancipation, whose policies are to be created in concourse between the accrued practices from abroad and the experiences specific to the organism of the context from within.

Every struggle is pointless if it is not inherent to the specificity of each community individually. A struggle can be qualified as emancipatory and successful if it is derived from the specific context as an urgent need for joint action in the discovery of the experiences of freedom. But we must not neglect the fact that the resistance, which results in struggle and advocacy of transgression of the retrograde policies and experiences, operates with the domain of power, with the hierarchies, with the establishment of a new power domain. For this very reason, and especially when issues related to liberty, equality and justice (political, economic, cultural, gender…) are concerned, we must be careful in our discursive, but also tactical and operative practices, since the opportunities for abuse of the expected change lurk behind each corner, and this is mostly due to the inadequate transfer of knowledge and tools from one cultural context to another. Each intelligent and verified experience should be embraced, but also critically adapted, so that the thing that was supposed to be progressive does not fall into the trap of the repressive. 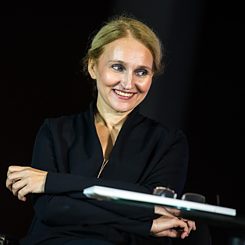 Photo: Vancho Dzambaski © Goethe-Institut The exposure to any kind of domination redefines and transforms the subject. It is our habit, however enlightening, to understand domination as something that oppresses from the outside that subjugates or delegates some lower order. But if, following Foucault, we understand domination for higher and more noble purposes as something shaping the subject and securing the preconditions for his existence, as well as leaving the trace of his existence, then the imposed political narratives would end up being not only something that we opposed, but also something on which our own very existence depended. We must not forget that the domain of domination/power and the domain of resistance share the same space.

The acceptance of the concepts that are to provide a stronger emancipatory context is often based on our thorough dependence on a discourse we have never chosen ourselves but which, in fact, bestirs and supports our progressive action. Therefore, I believe that the struggle for justice and deconstruction of the power domain is a process of establishing a subject unburdened by the idea of hegemonic oppression, but open to accept and redefine every good concept that might take him a step closer to freedom.

Next question:
"Has freedom become only discursive, empty of semantic value in a world which is imprisoned by economical, ideological and political injustice?"

Iskra Geshoska is founder and a president of Kontrapunkt. Since 1994 she has been active in the building of the Independent cultural sector and the contemporary, self-organized formats of action in the socio-cultural space. She contributes to the local, national and international affirmation of the independent cultural sector and its political relevance. Her key focus is the development of critical thinking and critical theories, as well as the relationship of cultural and artistic practices and the political.  She was Director of the independent Cultural center "Tocka" (Skopje) from its founding until its closing (2002-2010). Within the framework of Tocka’s programme, as well as before and after, she developed and led over 15 projects in the field of cultural policies, critical theory, critical debate, visual and performative arts; examining the relationship of art and politics. In the period 1998 - 2008, she was an editor at the publishing house Templum and the magazine Margin.  From 2003 to 2005 she was an adviser at the Ministry of Culture of the Republic of Macedonia. From 2012 until 2017 she was President of JADRO - an association of the independent cultural scene, a national platform for advocacy in Macedonia. Additionally, she is a Member of Parliament of the Helsinki Committee for Human Rights, and she has a second mandate as a member of the Advisory Board of the regional platform of the Independent cultural sector KOOPERATIVA.