The concept of peace has not been lost so long as people who carry it in their minds, on their lips and on their flags and helmets understand it as a hope for a possible, binding and uniting co-existence.

This question was posed to a poet, a religious believer and a woman. The word “peace” (Friede) can be found in the German language since ancient Germanic times, when tribes contested against or pacted together with each other to secure “unity, harmony”. In times of peace stability grew; from stability came prosperity, affluence and respect for the individual; and yet war has also furthered all the mentioned benefits, albeit often erratically and guided by the law of the jungle. If a dove is the emblem of peace, a boar with huge tusks is emblazoned on the flags of war. Peace is gentle, war is rough. An old meaning of the word connects conciliatory peace (Friede) with what is still proverbially associated with good neighbourly relations: fences, enclosure (Umfrieden). 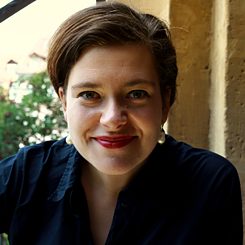 Photo: Judith Kinitz © Goethe-Institut The question posed by my esteemed predecessor is based on the assumption that the world is no longer in the hands of human beings, but in those of various tyrannical, tactical “players” who have turned away from human and planetary well-being. A religious believer cannot endorse that. She prays, she hopes, she sticks to the small things, the manageable and feasible within the frame immediately pertaining to her. She calls for help and assistance from those who seem to her to be responsive to values that are also dear to her: consideration, respect, equality, reason and resolution. The small number becomes a large one. The believer trusts that the world cannot be fully ruled by human beings, and that a higher power guides destiny. This trust is for her, however, a challenge and a task, and she is resolved to defend its privilege in her thoughts again and again. The concept of peace has not been lost so long as people who carry it in their minds, on their lips and on their flags and helmets understand it as a hope for a possible, binding and uniting co-existence.

Next question:
"Who is responsible for the future of freedom in Europe?"

Nora Gomringer, born in 1980, is Swiss and German. She lives in Bamberg, where she is director of the International Artist House Villa Concordia on behalf of the Free State of Bavaria. She has held poetry lectureships in Koblenz / Landau, Kiel, Sheffield and Vienna and, together with Philipp Scholz, was honoured with the Professorship of Poetry at the University of Klagenfurt for the year 2018. Since 2000, she has published eight volumes of poetry, two volumes of essays, numerous short stories, radio plays, narrative texts and (opera) librettos. Recently she has published the Trilogie der Oberflächen und Unsichtbarkeiten (Trilogy of Surfaces and Invisibilities), comprising Monster Poems (2013), Morbus (2015) and MODEN (2017) (Verlag Voland & Quist), illustrated and designed by Reimar Limmer, and the speaking text Achduje (2015) (Verlag für Gesunden Menschenversand, Lucerne). She has also written the text for Andreas Herzau’s photo book Bamberg Symphony (Hatje Cantz, 2016). And in 2015 she edited her Lockbuch, including her own digital photographs, for the Maximilian Society in Stuttgart. Gomringer’s writings include collaborations with musicians such as the jazz drummers Philipp Scholz and Günter (Baby) Sommer, and the pianist and composer Ulrike Haage. Numerous of her individual texts have been set to music by Philipp Scholz, the Wortart Ensemble, Julia Mihaly, Paul Engel, Iris ter Schiphorst, Helga Pogatschar and others.