A guarantee of sovereign power over your own body has so far been more utopia than reality. A utopia that is much more in danger today.

Of things wished for

Basically, I would answer the question in the negative, even if the “No” scale varies greatly depending on the country and government and may even turn into a weak “Yes” here and there. My “No” is not about belittling the liberal achievements of the last decades, but rather about dismantling their false self-evidence. Ultimately, the liberal principle of sovereign disposition over your own body has never been guaranteed - and never will be as a precept of coexistence. Even if in this paper-thin moment, in this here and now in which I am living, it may seem as if we had to do with something irrevocable, "My body, my choice" is an arduously gained good guiding principle that can always fall victim to an archaic backlash. In this sense, the many emancipatory achievements – in Europe, too – are only still inscribed: for some they are still guaranteed and self-evident; for others they are still (or yet again) unreliable and reversible. 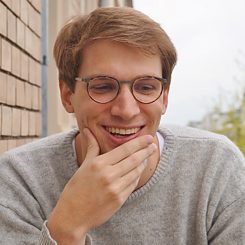 Photo: Maria Mast © Goethe-Institut I am also a bit scared and respectful of the many singulars in this question: Whose body? Which Europe? Are we talking about a pregnant woman who wants an abortion? Are we posing the question in Luxembourg? Or in Poland? Or are all bodies of all people in all European countries meant? It is quite possible that this singular harbours the grammatical utopia of a united, coordinated Europe, a wish construction somewhere between fulfilment, development and imperilment.

I could now speculate on the reasons for such a possible backlash; I could talk about countermeasures, perhaps even present one or the other, for instance in the form of a courageous diatribe against the reactionaries and the shift to the right. That is needed, yes, but in my opinion rather within the framework of a responsibly lived everyday life and less as a manifesto to whip up initiates. For such work I have neither the political nor sociological know-how, nor is are knee-jerk speeches really in my line. Actually, here I can do little more than deliver a (literary) self-analysis, reflect on how I live, think and write, and how the social dynamics of recent years has affected these activities.

If I do that, then I realize that I work too often in an automatic culturally pessimistic mode; I cultivate an ambiguous a kind of thrilling fear of proclaiming the advent of decadent transitions and end times; I meet this fatalism, which also characterizes many chain-reaction essays, with an often reflexive, short-sighted actionism; I realize that I (still) lack discursive certainty about those words with which we are currently constantly operating: nation, Europe, populism, freedom, future. And that, finally, resolute calm and strict composure would be in order.

Accordingly, I am a little afraid, and at the same time a little thrilled, to juggle in conclusion with these many high-quality terms; this can only be clumsy or funny in my case. There is really only one chain of questions that I would like to throw up in the air to see if it flies or falls: Will the next contributor also feel a kind of grievance that his / her world-view, including certain believed-in vocabulary, has faltered? Is this shock of having to talk about “freedom” no longer as a rhetorical blank but as a lived and precarious practice the reason for the (hyper-) activism of the perplexed people whose response we often encounter in editorials, essays and speeches? In short, have we perhaps never had any idea what freedom is?

Follow-up question:
"Have we perhaps never had any idea what freedom is?"

Samuel Hamen, born in 1988 in Luxembourg City, studied German literature and history at the University of Heidelberg. He is currently doing his doctorate there. As a freelance editor he works, among others, with Zeit Online, the programme Büchermarkt (Book Market) on Deutschlandfunk and the Luxembourg weekly newspaper d’Lëtzebuerger Land. He also works as external staff for the Luxembourg literature centre CNL – Centre national de littérature and writes essays for numerous German language newspapers. In 2018 he made his literary debut with the story V wéi vreckt, w wéi Vitess (Éditions Guy Binsfeld).