Elnathan John
Nigeria/Germany
How can we enhance the situation of art laborers?

Artists who enjoy the privilege of not having their art being questioned as labor can commit to improving the welfare of all artists by using their privilege to make a stand for fellow art laborers who have not attained this status.

FREEDOM FOR THE MANY AND NOT JUST THE FEW

One impediment to fully realizing art as labor — not for a privileged few, but as a matter of course — that lurks in capitalist spaces, is the skillful exploitation of our competitive nature by capitalist structures, to create hierarchies among artists, treating those at the top with dignity, while exploiting those below. 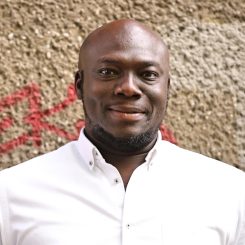 © Alla Sieg This impacts freedom in a world where the gatekeepers within art professions act as enforcers of a culture of patriarchal respectability and order, and where breaking free from such conformity can lead to things like blacklisting. One way artists can commit to maintaining and enhancing the professional situation and freedom of art laborer’s is by refusing to be silent beneficiaries of arbitrary and selective systems that demean other professionals or refuse to acknowledge the art of others as labor.

Unions like the Society of Authors in the UK which supports professional behavior in bookselling and publishing and promotes creative expression and freedom of speech can help. This union, for example, gives members advice on contracts and fair rates for their labor, while promoting equality, dignity and respect. Unions help establish minimum standards and help fight exploitation especially in dealing with institutions.

On an individual level, artists who enjoy the privilege of not having their art being questioned as labor can commit to this by using their privilege to make a stand for fellow art laborers. In a project, festival, or event, headliners or lead-artists who get paid, can demand that there are no unpaid artists on their project. They can demand that artists are not exploited in the name of volunteerism, which is one of the more common ways of exploiting artists. Another way of achieving this is by simply telling fellow artists about their fees. This might seem simple, but it is revolutionary. One way that institutions get away with selectively disregarding art as labor is by secrecy. If they can get higher paid or paid artists to be silent about their fees, then they can convince others to be volunteers or enter other exploitative arrangements.

Follow-up question:
In an increasingly polarized world, how can artists accommodate the freedom of other artists whose views they disagree with, while committing to principles of justice, dignity and anti-discrimination?

Elnathan John is a Nigerian lawyer, novelist and satirist. His short stories have been shortlisted twice for the Caine Prize for African Writing, in 2013 and 2015. His debut novel, Born on a Tuesday won a Betty Trask Award and was shortlisted for the Nigeria Prize for Literature. It has been translated into German and French. His most recent book — a satire collection Be(com)ing Nigerian, was published by Cassava Republic Press in February 2019. On Ajayi Crowther Street, his graphic novel will be published in November 2019. Elnathan is one of the judges of the 2019 Man Booker International Prize. He is a 2019 recipient of a work stipend for Non-German literature from the Berlin Senate Department for Culture and Europe. He lives in Berlin.