Multifaceted Illustrations
How Proverbs Connect Us

There are many sayings and proverbs that we use almost on a daily basis without thinking of the meaning behind them. For many of them an image instantly springs to mind – and sometimes that image is incomprehensible, amusing or just wrong. Yet, proverbs are a core element of every language culture. Four artists approach a different language culture in the form of illustrations. This is how Beatrice Davies from Germany and Nik Neves from Brazil got to know each other. On the other hand, Anjali Mehta and Jinyoung Choi try to overcome cultural distances with the drawing pencil. Despite all the geographical distance, the results reveal one or two things they have in common.

In 1972 the two famous musicians Caetano Veloso and Gilberto Gil recorded the political song Cada macaco no seu galho. The song was written around eight years before that by author Clementino Rodrigues, known as Riachão (1921-2020), and their version became an instant public success in Brazil. The lyrics are derived from a proverb and contain a critique of historical racism in Brazilian society as well as a reference to the distance between social strata – each monkey on its own branch. The song, which has been interpreted by a number of other musicians in the following decades and is considered a Música Popular Brasileira, was always present in the spirit of the pandemic: everyone for himself or herself and the divide between poor and rich is greater than ever before.

“When I thought about what I associate with the Brazilian proverb “Cada macaco no seu galho” which literally translated from the Portuguese is “each monkey on its own branch” and means “each person in their own corner”, I had to think of quarantining at home and the lockdown in Germany, during which every member of the public had to sit nicely on their own branch. So when I then found myself quarantined at home, I often looked out of the window at the building opposite. I observed how people lived their lives differently in each flat, ‘on each branch’. Each individual flat was a little world in its own right. And the individuals in them looked so close and yet so distant from each other,” writes Beatrice Davies, an illustrator and comic artist living in Berlin.

In 1897 Carl Flügge, a scientist from Leipzig, researched how physical closeness and distance affect the transmission of pathogens. He speculated that it was possible to reduce the risk of infection by maintaining distance between sick and healthy people. His hypothesis was confirmed 40 years later by scientists with the help of high-speed photography, thereby creating the basis for the future requirement for distancing rules as practised during the COVID-19 pandemic in particular. At the moment everyone tells you to “Keep your distance” and not “zu Leibe rücken” – approach anyone too closely. So it’s clear that the concept of “Jemandem zu Leibe rücken” with its original meaning, to come threateningly close to someone, is still very topical.

“Illustrating the expression “Jemandem zu Leibe zu rücken” was not an easy task. But what would be easy, bearing in mind I only started learning German at the age of 30? I can’t recall ever having heard the expression in nearly seven years while I was working between Germany and Brazil – which makes it difficult to be exactly certain whether the drawing truly hits the spot. Internalising and interpreting the meanings behind abstract concepts is probably the greatest challenge. Linguistic subtleties that require longer – but ultimately really give you the sense of being at home in a culture,” says Brazilian illustrator Nik Neves.

“The near neighbour is better than the distant relative” 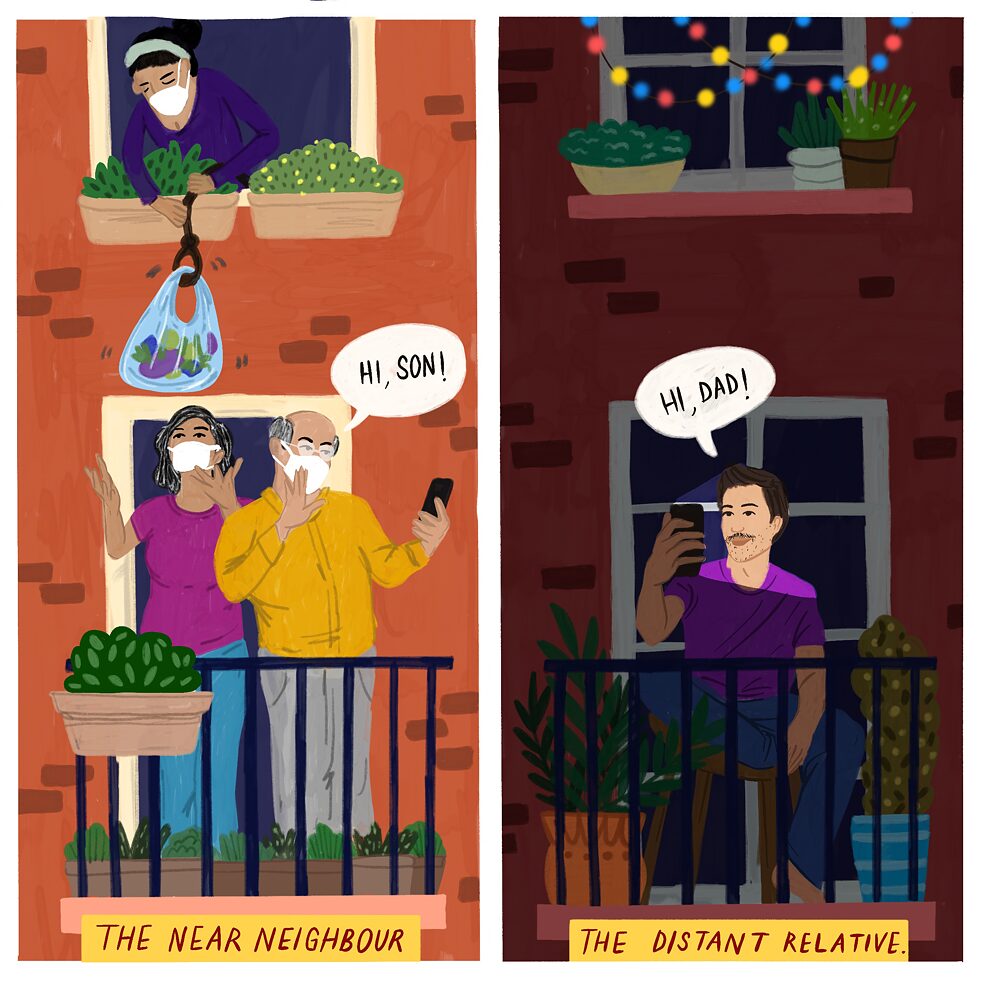 “The famous Korean proverb, 'The near neighbour is better than the distant relative' has multiple layers of nuances attached to it that became very relevant during the pandemic. But, we may have our own personal perceptions and experiences associated with this proverb. We have seen and experienced how people who lived close to us became increasingly functional in our daily life: from everyday chats and catching-up to spending days together, cooking for each other, helping each other with needs if someone got sick. And the beautiful part of this proverb is that it wasn't just an experience in Korea, but one that was seen and felt all around the world. My artwork shows a rather commonly witnessed act of kindness, where an older couple is being helped by a neighbour with food and groceries, on a video call with their son, who resides in a different country and can only provide comfort through virtual calls without being able to do much else,” as Anjalia Mehta remarks.

Illustration: “With Strong Steps” by Jinyoung Choi | Illustration: © Jinyoung Choi
“Thinking of the saying ‘One’s destination is yet so far away‘, a faraway landscape of mountain peaks unfolded in front of my eyes. The sun is growing darker, and even though it is still a long way to go before reaching the destination, by slowly taking one step after the other, the mountain can be crossed. Because of the corona pandemic, many things have become non-transparent. And in these frustrating times, I hope that, while we walk forward, step by step, we embrace the beauty around us and the precious values, in order not to get tired on this long journey. With this wish in my heart, I painted,” says Jinyoung Choi.

Anjali Mehta is an artist and an illustrator currently in New Delhi, India. Through her illustrations she recreates patterns, scenes, and relationships foregrounded by her personal experiences of modern life. She loves to celebrate the human psychology, the marks people make on the world. Her bold artworks are brought to life using the strong use of pigments, textures and patterns exploring various materials and mediums. She is inspired by strong women, travelling, photography and human beings.

Born in 1990 in Italy, Beatrice Davies is an illustrator and comic artist based in Berlin, Germany. Having obtained a scholarship from the School of Visual Arts New York in 2010, she began her studies in illustration. In 2015 she started studying visual communication at Weißensee Academy of Art Berlin. In 2016 she was awarded a ComicInvasionBerlin grant, which kickstarted a collaboration with the homeless newspaper strassen|feger. Her first graphic novel, Der König der Vagabunden – Gregor Gog und seine Bruderschaft, published in 2019 by avant-verlag, was shortlisted for the Leibinger Comic Prize 2019. Her second comic book, A Child’s Journey, was published in spring 2020 by JaJa Verlag.

Based in Seoul, Jinyoung Choi works on illustrations for various types of media. On social media, she often shares drawings of everyday life items to relieve tension from people’s hearts, whilst she is active under the pseudonym ‘healthy drawing’.

Nik Neves is a Brazilian cartoonist, comic artist and illustrator. He is the producer of the independent magazine Inútil, where he publishes comic experiments and graphic narratives. As an illustrator, he works frequently for magazines and publishers in Brazil, Germany and England.