After having seen the Tupinambá mantle at the Quai Branly Museum in Paris for the first time, it then appeared to Gricelia Tupinambá in a dream and spoke to her. Only once within its sacred land, when reoccupied by the Tupinambá, would the mantle reappear and truly exist once more. Having disappeared for centuries, only to be found in very few European museums, the sacred Mantle of the Tupinambá nation now exists once more, recreated last year, during the devastation of the pandemic, through the extraordinary art of Gricelia Tupinambá.

Indigenous people were heavily and disproportionately affected by the coronavirus, with 60,000 cases, more than 1200 deaths and 163 nations infected. According to the indigenous movement APIB, viral transmission was, in certain situations, instigated directly by federal government officials. This health tragedy was followed and accompanied by all sorts of institutional attacks with the pandemic being described by the federal government as an “opportunity” to advance infra-legal assaults on environmental and territorial collective constitutional rights. Or, as I have written: the cruel “opportunity” of genocide. Many distinguished leaders, chiefs and shamans – living annals of the forest and of collective experience - were brutally taken.

Movement for Reoccupation of Colonial Territory

The sacred mantle and the movement for reoccupation of ancestral land are two dimensions of an intense political struggle for this native nation living in the Atlantic Forest of North-Eastern Brazil – the forest hardest affected by colonisation in Brazil with only around seven percent  of the original forest remaining. Bridging the two worlds of art and a multi-facetted political struggle, Gricelia and the Tupinambá are part of a movement that aims to reimagine human existence on this planet: postcolonial, post-capitalist and post-Anthropocene.

In one of his poems, the multi-disciplinary artist Denilson Baniwa describes the emergence of a new world:

All colonial territory
Is ancestry land, first of all
When all scum is scraped off
Plastic, asphalt, metal
Untold stories in History
Oxygen fills the blood.
Those who have always been from here know
São Paulo has always been
Indigenous land

This poem was written just a few months before the outbreak of the pandemic, during an intervention in the most distinguished avenue of Sao Paulo, the Paulista Avenue, as a reminder to all that those grand buildings, framing the landscape, were built on colonial territory over sacred indigenous soil. What remains when the ashes of colonialism are swept from the surface can not be a thing from the past, but a new world emerging to suspend the sky.

The Power of Culture and Art

After centuries of systemic silencing and erasure, native art is now raising awareness of not only genocide but also epistemicide. This powerful native art, or, as the indigenous artist Jaider Esbell calls it, Contemporary Indigenous Art, is anticolonial and deeply founded in diverse ontological perspective, calling for a reconnection with other beings on Earth. Furthermore, the revolutionary perspective of native art is reminiscent of the political sensitivity of the great African leader Amilcar Cabral. Cabral demonstrated the importance of “dismantling colonial regimes of historical representation”, as well as the revolutionary ecological perspective “to understand the relations of living things to their environments”. As the leader of the liberation of Guinea Bissau and Cape Verde, Cabral understood that culture is embedded in history and highlighted the power of culture as a revolutionary vehicle in the struggle for collective autonomy. The same applies to Brazil, and elsewhere, when attempting to dismantle the catastrophic ecological era that follows colonialism Historically, ecological damage begins with the dehumanisation of indigenous peoples and the desacralization of territories, which makes possible the transformation of territories into resources to be extracted and bodies to be exploited through forced labour. Indigenous shamans and philosophers have been aware of this process since the arrival of Europeans, as noted by chroniclists such as the French calvinist Jean de Léry when speaking to an elder Tupinambá in the 16th century. According to de Léry, the elder stated: “We have kinsmen and children, whom, as you see, we love and cherish; but because we are certain that after our death the earth which has nourished us will nourish them, we rest easy and do not trouble ourselves further about it”.

Culture and art constitute a powerful means to defeat colonialism and to rebuild or recreate worlds destroyed, as Ailton Krenak refers to the political projects of existence after the genocide and ecocide of conquest. In this sense, as part of the research project Another Sky with my colleagues Mary Menton from the University of Sussex, Jurema Machado from the Federal University of Reconcavo of Bahia and Felipe Cruz Tuxá, from the native people of Tuxa and the State University of Bahia, we have tried to combine indigenous arts with training indigenous students on mapping indigenous rights abuses. A cartography of the relationship between extractive violence and ecological resistance has shown that native territories are territories of resistance against conquest, of anticolonial resistance, of re-takings, of re-occupations, of creation and recreation of worlds and of art.

During the pandemic art emerged as a powerful means to mobilise the community and access spirituality, such as through shamanic songs and dances to protect bodies, call for healing and soothe the Earth. Or, in the case of the Tupinambá Mantle created by the artist Gricelia, this piece of cosmological art not only brought a sense of aesthetic beauty to the community, but also pride and the realisation that art can facilitate the connection between beauty and the ecological conditions of life that are only guaranteed them through political struggle and the occupation and care of their forest.

The End of the Anthropocene?

My colleague Felipe Tuxá explains: “The ecological collapse is not an indigenous crisis, but a global one. It has reached people who did not need to deal with it until now. The ecological concern brings together in this sense the destroyed worlds of the indigenous peoples and the question of how to live in a destroyed world.” Indigenous peoples, who are “victims and revolutionaries” of the Anthropocene, have demonstrated a sustainable way of living and have now garnered attention from outsiders – or the “anthropoceners”. An indigenous anthropologist asks: “Is this a genuine or an instrumental interest?”

Native art, political and cosmological struggle and decolonial epistemology are helping to focus criticism of the Anthropocene, which has led us to the current climate emergency. The question posed by Tuxá regarding indigenous peoples, will certainly be present in Glasgow during the UN Climate Conference COP26. Is the interest in combatting the challenges facing new generations of indigenous peoples to survive, truly genuine? 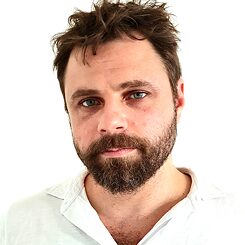 Portrait Felipe Milanez | Photo (detail): © Felipe Milanez Felipe Milanez is a political ecologist and professor at the Institute of Humanities, Arts and Sciences at the Federal University of Bahia, Brazil. He holds a PhD from the Centre for Social Studies at the University of Coimbra, from the political ecology research programme European Network of Political Ecology. Feipe Milanez is a public writer, photographer, documentary filmmaker and activist, the author of two books about the history of violence against indigenous peoples in Brazil (Sertanistas Memories and Wars of Conquest, only in Portuguese), columnist for different outlets (CartaCapital, Mediapart.fr, Midia Ninja), director of the documentaries Toxic Amazon, about violence against environmental defenders in the Amazon, and The Guarani Struggle, about the genocide of the Guarani and Kaiowa amerindian nations, and a former editor for National Geographic Brazil.

Back to “Science and Research”