His name may not sound Italian, but Italy is the country of his birth. His mother is Italian, as are the values he sings about: the fight against racism and prejudice, the right to citizenship for second-generation immigrants. 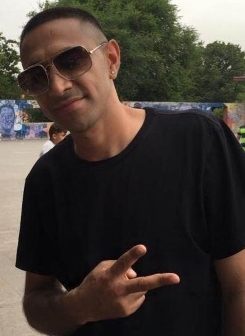 Rapper Amir | © Mariella Nocenzi “My mum was Italian, as was her entire family. To keep it brief, I was born in Trastevere, grew up in the suburbs of Garbatella and most of all Torpignattara, and if I ever had to go to Egypt, I’d be completely lost. I went to a nun’s school in Testaccio as a little boy, and even though my dad is Egyptian, I’m not a Muslim.” That’s how rapper and album producer Amir Issaa recently described himself. He has lived in the stigmatised Roman suburb almost since birth, and considering his roots, nobody would have predicted he would become a public figure one day. Indeed the story of the son of a mixed couple who found each other in the poor part of Rome during the first major immigration wave of the 1980s does sound more like a fairy tale; these days, he sings against the continuing prejudice he has experienced from an early age because of his parents’ nationalities.

A personality that unites contradictions

Much in the story of 38-year-old Amir seems like a contradiction, and maybe that is precisely what makes him an “important personality”: the ability to make the impossible happen through artistic creativity. For example, from releasing his first album Uomo di prestigio in 2005 to his latest one, which he’s been finetuning in recent months, he has written, composed and produced almost one album per year. Inspired by life in Torpignattara, he has filmed scenes for his videos amongst the suburb’s buildings, featuring local residents. A rapper from the geographical and social periphery of Rome who challenges the powerful international record labels with his successful titles and gives other artists the same opportunities. To top it off, his independent label Red Carpet is the result of what seems like yet another impossibility: Amir did indeed walk the red carpet when his soundtrack for Francesco Bruni’s Scialla! Stai sereno led him to the Venice Film Festival in 2012, and again when he was nominated for the David di Donatello film award and the Nastro d’argento, attended by president Giorgio Napolitano.

Amir’s views on the social role of music and artists

In addition to his creative pursuits, Amir’s beliefs have led him to embrace a host of social initiatives that have contributed to transforming the contradictions in his biography into an example for all Italians who don’t have full citizenship – including those who, like him, are the sons of foreign citizens but were born in Italy. In his video appeal Caro Presidente, “Dear President”, he specifically addresses Giorgio Napolitano and demands that citizenship be awarded based on the principle of ius soli, i.e. according to the country of birth. Together with his colleague Karima, Amir also promoted this campaign to the President of the Council as well as to the parliament, addressing topics he had already discussed in his 2006 song Straniero nella mia nazione, “Foreigner in my own country”. It talks about the difficulty of being mistaken for an immigrant as an Italian citizen. Amir hasn’t set himself an easy task here: When he recorded the song Ius Music in 2014, demanding rights for second-generation immigrants in a heated and deliberately provocative manner, he filmed the video at a school in Torpignattara with the participation of Khalid Chaouki, a parlamentarian of the Democratic Party and himself the son of immigrants. Amir wasn’t surprised that this caused a lot of controversy. His own experiences as a child in the streets of Torpignattara and these days in schools and prisons, as an ambassador for Save the Children or the Ministry of Equality, have taught him that there is still a lot of resistance to other skin colours and cultures. But he himself is an example – not the exception – for how this resistance can be overcome. With Torpignattara as a starting point, he discusses these issues in the schools of neighbouring San Basilio as well as on an American campus in Massachusetts, allowing him to proudly present his message on the pages of a major newspaper like The Guardian: He has come a long way, but at the same time, there’s still a lot left to do.