The fact that human life was put first and economic slowdown, recession and a financial crash were accepted as the necessary costs that need to be paid to save humans from dying of the disease – does this give reason to hope for a new planetary humanism? 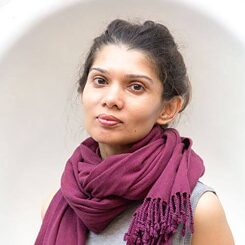 In between reading about plagues past and present, in between catching glimpses of parrots flying home (I think) late-late afternoon and parrot-green sprouts, those leaves of spring, in between trying to help and being of help, still more inadequate than the situation demands, I have also settled into an indulgent and necessary pattern of over-the-top and insistent musing of “when this is over.” But that doesn’t mean things go back to normal, because when things were normal, I was also musing, agitating when that would be over. That was the normal which has led to this present, and what the present demands is every bit of speculative feat to forge what’s ahead. And to do that means to attend to this present as audaciously, as lovingly, as determinedly as possible, and even do the impossible.

Since much of the world has ground to a halt, it’s been easy to draw artless comparisons – I keep seeing versions of “we’re in this together” everywhere. But if anything, the schisms within “we” and “together” are that much clearer; the unevenness, the injustice that much starker in this virus-ravaged realm. The battle to survive, to stay alive, to be able to get care so stacked against those who are powerless. This catastrophe once again confirms a normal – capitalistic circulation and accumulation – so opposed to human dignity that it never prioritized, will never prioritize, public well-being and is responsible for ushering in one disaster after another.

One of the many conceits of this bargain is an illusion of choice when really there isn’t any or otherwise you are shoved into picking from the detritus of false choices, because if you have to risk your life for even the basic necessities, to not starve – do you want food or do you want to live –, that’s no choice at all. In India, in Bangladesh, in the Philippines, in places far and wide, workers lament: “If we don’t die of the virus, we will die from hunger.” It’s not that they want to put their lives at risk for work, they would rather not, but they have no choice. And in dwellings too crowded, too dank, in the Rohingya camps of Cox’s Bazar or the camps of Urdu speakers in Dhaka and the settlements in the same city facing the headquarters of the largest NGO in the world, social distancing is unimaginable. Speaking to a reporter, a resident of one such camp in Dhaka said their living quarters were riskier than the streets where they could at least spread out more. Another resident who shared one room with five other family members was quoted as saying, “We have so little space to live. If the virus spreads [here], it will result in famine” (Dhaka Tribune, April 11, 2020). This is a system that does not concern itself with saving lives. As a recent article in the Journal of the American Medical Association (April 15, 2020) put it more bluntly:

“The most effective strategy known to reduce Covid-19 infection is social distancing, but herein lies a vexing challenge. Being able to maintain social distancing while working from home, telecommuting, and accepting a furlough from work but indulging in the plethora of virtual social events are issues of privilege. In certain communities these privileges are simply not accessible.”

That there is even a debate on health vs the economy makes this obvious and the pandemic has only magnified and escalated these unjust divisions, making “we’re in this together” every bit as hollow as a royal we. To convey this, lyricist Amal Akash of the cultural ensemble Samageet from Bangladesh does not equivocate, “Stay home, stay home, but where’s that? / Pavements and platforms are her abode / Home, where can she find one, what does that mean?” and then, changing up his perspective: “Stocked up with food / With enough leisure to contemplate / Let’s stay safe at home for now / And spend time counting the dead.” If the shutdowns happened to save lives and they are effective, they also reveal how incidental lives are to healthcare systems around the world too prejudiced, profit-oriented and/or underfunded to alleviate the burdens of those they purportedly serve (patients) or those who serve in that system (healthcare and ancillary staff). In America, “persons who are African American or black are contracting SARS-CoV-2 at higher rates and are more likely to die” (JAMA, April 15, 2020). In Bangladesh, testing for Covid-19 is one of the lowest in the world; as of this writing, the country was testing 103 samples per million daily (Dhaka Tribune, April 16, 2020). There was an ordering of life in that pre-Corona normalcy, a discriminatory structure, and which lives, how, and where those lives are put first becomes manifest in this crisis.

In a show of appreciation, solidarity, some semblance of collective action during confinement, people are taking to their windows and doorsteps to clap for healthcare and other essential workers and I think that’s fine. But fine is not enough. Feelgood, symbolic clapping cannot replace fighting for material improvements to people’s lives; why should anyone be forced to accept jobs or contracts with squalid terms or stare down the misery of unemployment and instability? In the absence of sustenance, the social machinery produces heroes to hide its dereliction, to normalize sacrifice, but people should not have to court danger and death or otherwise get wrung out dry for their jobs. Healthcare, housing, education, utilities, safety nets, these are necessary provisions for a dignified existence which we cannot cede to profit, but the centrality of profit, including in distributing these services, was a pre-pandemic condition already and returning to that condition will be devastating.

Then there’s the economy, enrobed in near biblical significance, mystified beyond recognition, when its secular tendencies are far more trite and almost as terrifying. It is, forgive the pedestrian observation, capitalist circulation, from which none of us are excluded but one that is built on exclusion and manufactured scarcity. People depend on the economy but its inability to solve the most basic demands of human life – shelter, food, health – is undisguised. We have to participate in the economy but that brings misery, and its core feature is a denial of dignity. Work and your health is at risk, don’t work and your stomach is at risk. Constructed as inevitable when it shouldn’t be, it’s a continuous mill of neglect based on how to leave people out; it’s a process for creating a mass of the undeserving – not the right citizenship, not the right skills, not the right documentation, not the right nationality, religion, race, not the right amount of innocence or productivity, and so it goes. Take the case of Singapore, where most of the recent surge in infections has been among migrant workers, the majority of whom are from India and Bangladesh (The Star, April 15, 2020):

“The situation in the migrant dormitories highlights the different standards applied to the mainly Bangladeshi and Indian manual workers whose labor has helped build the glitzy, modern city-state, and the rest of the population. The government has put up Singapore residents returning from overseas in expensive hotels to limit contagion. Some migrant workers have been confined to bunk rooms that they say had blocked toilets and overflowing refuse bins.”

The primary question to ask isn’t what happens to the economy or how to revive it, it is how to take care of each other. Public health experts have repeatedly emphasized staying at home as a measure for the greater good, but it’s also why this has been so difficult because an infrastructure so denuded of a commons and a greater good is unable to support it and the people within it. The stimulus will run out, subsidies will wilt, loans and waivers will become debt burdens. Providing such necessities as health and shelter depends on conceiving, then constructing a commons, the prioritization of public good, contra this model built on scarcity and exclusion. And for that, collective action and organizing are necessary, a new “we” is in order, a revitalization of transnational left movements, one that doesn’t take the logic of capital as some divinely ordained certainty from which there is no escape – “a better world does not exist in the thwarted ideals of the present, but in the real processes that might abolish the present” (voyou, March 16, 2020).

Speaking to a friend whom I hadn’t seen for eight years, she in New York and me in Dhaka, I finished my thought: “When this is over, I want to live in a commune with my friends,” of course in a city because that’s one place I couldn’t escape.

Parsa Sanjana Sajid is a writer, researcher, and editor based in Dhaka, Bangladesh. She writes about politics, art, and culture and has published with New Internationalist, The Funambulist, Migrant Journal, Book Works among others.