I have a problem with the expression “populism”. Peron was a populist and so was Chavez. But Orbán and his friends are not populists. Populists are demagogues, yes, yet they really support “the people”, not the wealthy classes. Some European totalitarian parties were also populists, yet only at the beginning. Orbán and his party, by contrast, have created their own oligarchy, the “new rich”, whose wealth is entirely dependent on them, while the gap between the wealthy and the poor grows wider and wider. I would speak instead of a kind of re-feudalization. These ethno-nationalist parties do not even claim to support the “people”; they support the “nation”; they claim to defend the nation against all its enemies like Soros, Brussels, and first and foremost against liberalism .To identify liberalism as enemy number one is nothing unique; the ethno-nationalists have this in common with totalitarian parties. Yet they are not totalitarian, because they do not need to be. 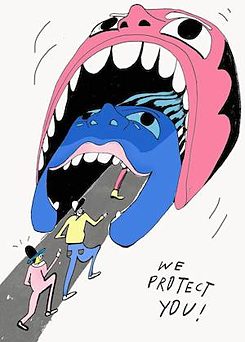 graphicrecording.cool Thus their identity politics is ethno-nationalist. For the ethno-nationalist, the “nation”, contrary to Aristotle, is not the sum total of its citizens but rather everyone whose ancestors came from the country in question, who are of the same “blood” and identify themselves as belonging to a country where they have perhaps never even lived. Like so-called “Volksdeutsche” who never lived in Germany, even whose parents and grandparents did not live there, but who were supposed to show loyalty to Germany rather than to the country of which they were citizens. In the eyes of the political rulers of Hungary, supporters of opposition parties are not Hungarians, yet people who have never lived in Hungary but are of Hungarian ethnicity are real Hungarians, provided they support Viktor Orbán. Ethno-nationalism can easily mutate into open racism.

Ethno-nationalism has been a traditional ideology in Europe since 1914, and was in fact the ideological motivation of World War I. Europe paid for this war with a hundred million corpses, all of them Europeans murdered by fellow Europeans.

True, the new ethno-nationalists of our day differ from those of the first half of the twentieth century in that their ideology is negative. They do not promise territorial gains, a society without alienation, happiness for all, or even grandeur; they promise protection. They claim they are protecting their nations against migrants, against the interference of others in their domestic politics, against the supposed curtailment of national sovereignty by the EU. They build walls not just against migrants, as they claim, but also against all the other nations in the EU who do not agree with them.

New parties are emerging from nowhere and represent no one, but claim to represent “the nation”, to defend “the nation”, gaining votes through negative ideologies. They are dangerous!


I said that the greatest enemy of ethno-nationalists is liberalism. As a result, when in power, they abolish the division of powers, centralizing all kind of decision-making institutions, the media and education, while creating institutions for brain-washing (such as the practices of the so-called “National Consultation” in Hungary). They are able to establish tyranny without resorting to the weapons of totalitarianism. They can do this because they have seized power not by force but through general elections – unfair elections, but elections nevertheless. They have been elected and re-elected, three times, five times, like Putin, Erdogan, Katzisnky, Sisi, Orbán. They all claim that their rule is democratic, since they were elected by a majority or almost a majority. Can anyone deny it? Trying to find a name for this type of domination, I found the expression “democratur”. The expression itself signals that “democracy” is in need of redefinition.

Democracy has been defined and re-defined several times in European history. Originally it meant direct democracy, the Athenian model. In Kant’s view, democracy became impossible in modern times because countries were too large and people could not gather in one place to make common decisions.
America was the first new type of democracy, a representative democracy, and only with the passing of the First Amendment a liberal democracy. It still took a long time to achieve universal suffrage. For a few decades in the nineteenth century and a few decades mainly in the second half of the twentieth century in Western and later also in Southern Europe, democracy was identified as liberalism combined with popular sovereignty and universal suffrage. For a while the word “democracy” meant popular sovereignty through universal suffrage, the division of powers, and constitutionally guaranteed liberties. Now we are facing a new metamorphosis of the term “democracy”.

What happened? To make a long story short, class societies were transformed into mass societies. Since there were no longer any classes (no class-consciousness), people became a “mass”. All traditional parties, conservatives and socialists alike, are losing their electorate. New parties are emerging from nowhere and represent no one, but claim to represent “the nation”, to defend “the nation”, gaining votes through negative ideologies. Negative ideologies are models of nihilism. They are dangerous.

About this danger I want to speak in my next letter. But first I would like to hear your comments on my ideas, doubts and, in particular, criticisms.