As a reporter in this group, writing from a country that recently elected a populist president, I feel it is my duty to report to you on the developments of the first year of Jair Bolsonaro’s government (we still have three more) to try to understand – as I write this and as I read your questions – how the president’s populist and authoritarian discourse is reshaping Brazil.

Over the past year, Bolsonaro has picked fights with the press, with Congress, and even with his own ministers.


He has even broken ties with the party leaders who elected him, the Social Liberal Party (PSL), which he has always used in the sole interest of getting elected. Now, following the same playbook of the most narcissistic of populists, Bolsonaro wants to found his own party, the Alliance for Brazil, whose slogan – “God, Family and Homeland”– emulates the Brazilian Integralist Action (AIB), an Italian-inspired fascist movement founded in São Paulo in 1932.

When he launched his new brand, with a billboard displaying 4 thousand cartridges of firearms bearing the symbol of the coalition at the entrance to the event, several of his supporters stood next to the image and took photos pointing a finger gun, a symbolic gesture of the Bolsonaro family. “It’s too strong, symbolically, not to rattle me” – says Caetano Veloso in a song about the base at Guantánamo.

Coincidence or not, following the announcement about the president’s new party, the integralist movement was all over the media again. The most serious case showed men throwing Molotov cocktails at Porta dos Fundos headquarters after the production company had released a Christmas special on Netflix portraying Jesus as a homosexual. An integralist group claimed responsibility for the attack and the man who led the attack, affiliated with the president’s party, fled to Moscow to avoid arrest.

Since his election campaign, I have insisted upon the president’s dangerous discourse in my columns in the Brazilian magazine Época as well as in the The New York Times newspaper. As I said in my first letter to you all, it was clear that his attacks on indigenous populations’ rights and defense of illegal mining preceded increased invasions of protected lands.

He tries to confuse monitoring and opposition with “turning against” the country and insists on his Cold War neurosis in which Brazil needs to fight "inimigos internos", internal enemies.


But that was just one example. Bolsonaro calls the press his enemy, tells journalists to shut up, and even said to a reporter at a press conference that he looked “terribly like a homosexual.” And, moreover, he simply refuses to take accountability for his government or for the corruption charges against his oldest son, Senator Flavio Bolsonaro. 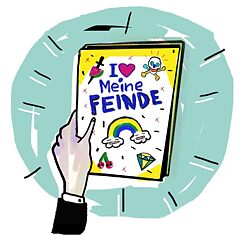 © graphicrecording.cool He treats his political adversaries (or anyone who doesn’t completely agree with him, as was the case with his own party) like enemies. He tries to confuse monitoring and opposition with “turning against” the country and insists on his Cold War neurosis that Brazil needs to fight inside enemies (inimigos internos). Always nostalgic about the military dictatorship and lauding torturers, he has told his adversaries more than once to go “to the end of the beach,” a known execution site of the military dictatorship in Rio de Janeiro. His impetus towards death is present in many of his speeches. And annihilate, shoot, destroy and finish off are the verbs he reserves for his adversaries.

The attack on the producer Porta dos Fundos on Christmas night was only the culmination of twelve months of a government that rallies its most faithful support base with incendiary discourse. As we know, violent discourses propagated by leaders cause societies to blur the definition of behavioral deviation.

The second year of Bolsonaro’s government started in an even more alarming way. On January 17th, then Secretary of Culture, Roberto Alvim, announced a new arts award (part of his project to “re-establish the arts”) using phrases that were identical to a speech made by the Nazi German Minister of Propaganda, Joseph Goebbels. In this video, posted on social media, playing in the background is Wagner’s opera “Lohengrin,” which was a favorite of Hitler’s.

Bolsonaro had decided to keep the Secretary in his position. But even the president’s first time allies said that Alvim had gone too far and called for his head. The embassies of Israel and Germany issued vehement statements. And the presidents of the Congress and of the Senate demanded his resignation. Alvim was demoted the next day. 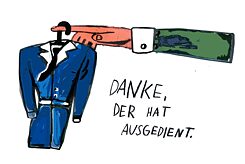 © graphicrecording.cool Since he only communicates through social media, Bolsonaro announced his resignation on Twitter, stating that the Secretary staying in office was unsustainable, “even though he apologized.” The impression we are left with is that the Nazi plagiarizer was not fired for what he thought, but rather for being so blatant about what he thought.

Today, I believe, we face a more serious threat. And I’m thinking that the term “populist,” which dominates the discussion of this group, isn’t enough to define Bolsonaro’s government.

Bolsonaro is, no doubt, a populist of the extreme right. His most faithful power base is a Tupiniquim copy of the American alt-right, just watch his aids chanting “God’s will!” at official events. But Bolsonaro is not only this.

The president is already called a fascist by leftist groups. But this reminds me of when, in other political moments in Brazil, the left called the Brazilian Social Democracy Party (PSDB) neoliberal government fascist because of their repressive military police operations. Today, when this is used against Bolsonaro, it seems diluted and perhaps hastened.

No doubt, his political project is a mass reactionary movement involving religious, military and exclusionary issues. I think it is right to say that it sounds quite like a tropical proto-fascism.

But, despite all constraints and attacks, the Congress, the press and the Judicial branch are still working.  Up to this point, the threat of dictatorship – what would be missing in the recipe for a fascist government – was only introduced in a speech by one of Bolsonaro’s sons, the federal representative Eduardo Bolsonaro. In an interview, he said that “if the left becomes radicalized,” the government could respond with an AI-5. The Institutional Act Number 5 established, in 1968, among other censures, the closing of Congress and the censure of newspapers, initiating the most difficult years of the military regime. When confronted about it, the president’s second son said that he had been wrongly understood and nothing happened after that.

To conclude my report to the group, I thought a lot about the second and third questions that Michael posed: How can we counter populism? And what role are we to play, we who belong to the cultural elite? The truth is I still don’t have a satisfying answer. I feel a bit myopic witnessing the ascension of the extreme-right populism in Brazil. Perhaps I am too close in time and space to see possible ways out at this time.

Professor Susan Benesch, from American University, who coined the term “dangerous speech,” suggests that leaders who are committed to democracy respond to discourses that feed violence with a counter sober and pedagogical discourse about the dangers of that message. And this comes back to us in this group, urging us to use the reach of our words to reinforce to our readers the importance of an inclusive democracy, that embraces sustainable development, freedom of the press, human rights, and all kinds of diversity. It seems basic, simple even, but in such muddled and oppressive times, not giving up can already be enough.

Translation: from Portuguese by Sara Hanaburgh