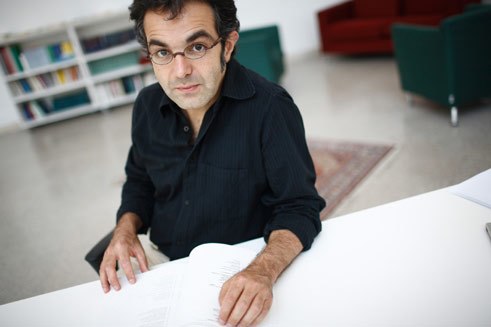 The Islam expert also has a lot to say in his capacity as prose writer. Navid Kermani surprises his readers with each new book, yet in doing so he always focuses on themes that connect people – and on the beauty of language.

Navid Kermani explains the genesis of his prose works as follows: “First, each of my books seeks a form. In fact, that is the point where a book begins: the moment you have found a tone, a form, a perspective.” Navid Kermani, born 1967 in Siegen, the fourth son of a Persian doctor and his wife, is a narrative thinker, a precise observer of human interaction. The habilitated Islam expert, non-fiction writer and essayist is one of the most knowledgeable and sought-after specialists on Islam and the Orient in Germany. In his prose works he links the cultures of the Orient and the Occident, effortlessly opening up insights into both worlds through all his publications. In May 2014 the author, who lives in Cologne, finally became known to a wider audience when he held the official speech in the Bundestag marking the 65th anniversary of the German Basic Law. Kermani focussed his considerations on the dignity of man in a constitutional state – and also on the beauty of the German language.

An individual form for each prose work

Navid Kermani’s style is as diverse and multi-layered as his extensive oeuvre. No one story resembles another, each novel is different. His style is marked by an ear for the sound of the words and an eye for themes that connect people, irrespective of religious or cultural affiliation. So far Kermani’s prose works alone amount to seven books in different genres, ranging from short stories like Vierzig Leben (Forty Lives) to the children’s book Ayda, Bär und Hase (Ayda, Bear and Rabbit) to his 1,200-page novel Dein Name (Your Name). Kermani has a lot to say, and he always looks for a different form in which to say it.

Kermani’s humour and his philosophical view of life permeate his writing. This is already evident in his fictional debut in 2002 Das Buch der von Neil Young Getöteten (The Book of Those Killed by Neil Young). In that book Kermani describes how thanks to the songs of the rock musician Neil Young his newly-born daughter’s pains disappeared – the medical impact of music and language. The Orientalist sees parallels here between the words and music of the Canadian musician and the Muslim tradition of the spoken Koran surahs, which the readers comes upon repeatedly in his text. His debut novel is still one of Kermani’s most successful works of prose.

Kermani is one of the few German-speaking authors who literally name God in their texts. Again and again he describes God’s influence on people’s lives. That impact is often benevolent, sometimes the divine intervention is brutal and unbearable for man, as in his collection of stories entitled Du sollst (You Should). Kermani, a professed Muslim, describes this impact without fear of taboos and often in a drastic language reminiscent of the Old Testament.

Mediator between Orient and Occident

Kermani began to write while working as a local journalist for the Westfälische Rundschau newspaper. It was there that he also learnt the art of the essay, which to this day accounts for most of his publications. Navid Kermani has never written poetry, but he is fascinated by Persian poems. He often infuses his texts with Sufi mysticism, as in his hundred-page novel Große Liebe (Great Love), where 11th century Persian poetry forms the link to a school-yard love story. Navid Kermani sees himself as a mediator between Orient and Occident – and a literary exchange project initiated by him is therefore called “West-Eastern Divan”, clearly alluding to the poetry collection of the same name by Johann Wolfgang von Goethe. Indeed German-language literature up to the Second World War often functions as Kermani’s intellectual and linguistic source: he frequently makes reference to Friedrich Hölderlin, Jean Paul, Franz Kafka, Thomas Mann, Heimito von Doderer.

Navid Kermani surprises his readers with each new prose work. When Dein Name appeared in 2011 Kermani’s artistic courage was recompensed. That novel, which celebrates life and commemorates the dead, was nominated for the German Book Prize. In it Kermani gives expression to his poetology and enables the reader to participate in his thinking; everything in the author’s life is material for the book, the borders between poetry and truth are blurred. What Kermani admires in other authors can be admired in Kermani’s own works: complex sentences with myriad associations and apparent detours, but all leading lead to the goal, to the beauty of the German language. Navid Kermani describes his writing as follows: “Everything is important enough to be expressed. What I cannot say in one book is the beginning of the next.”

Navid Kermani is a member of the Deutsche Akademie für Sprache und Dichtung and of the Hamburger Akademie der Wissenschaften. The Orientalist has been awarded numerous prizes for his work, including the Buber-Rosenzweig Medal and the Kleist Prize. In 2014 Kermani received the Joseph Breitbach Prize for his oeuvre to date, the highest endowed literary prize in Germany.

Milena G. Klipingat is a free-lance journalist and culture manager in Munich.