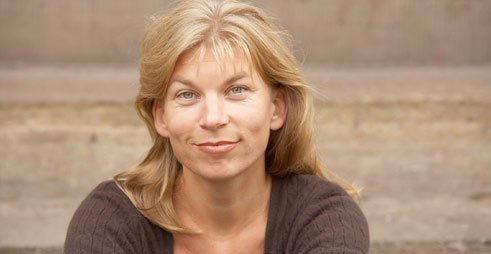 Katharina Hagena wrote her way onto the international bestseller lists with “The Taste of Apple Seeds”. Her second novel, “On Sleeping and Disappearing”, proves again that she is an exceptionally gifted narrator.

It’s when you don’t overdo things that you sometimes achieve the greatest success. Katharina Hagena, born in Karlsruhe in 1967, was actually on her way to becoming a professor when she had a sensational literary success with The Taste of Apple Seeds in 2008. Her novel about the fate of three generations of one family was celebrated by readers and critics alike; by 2013, that family story had not only sold 1.5 million copies and been translated into 25 languages, it had also been made into a film. Yet poetry did not just enter into Hagena’s everyday working life with her first novel: in 1995 the author wrote a doctorate on James Joyce’s novel Ulysses, then a German Academic Exchange Service (DAAD) lectureship took the literary scientist to Trinity College Dublin for two years. Teaching contracts at the universities of Hamburg and Lüneburg followed. Today she is a free-lance writer living in Hamburg. In addition to her two novels, she has also published textbooks and books for children.

In Hagena’s novels, remembering or forgetting exert a gradual destructive influence – involving a delicate balancing act. In The Taste of Apple Seeds the first-person narrator, Iris, returns to the place of her childhood after the death of her grandmother Bertha. She used to spend her summer holidays in Bertha’s old house with her cousin Rosmarie, until Rosmarie’s tragic death. One after the other, Iris opens the chapters of the family chronicle which contains stories about Bertha, whose personality declined into dementia, about the attractive Aunt Inga, whose hands emitted sparks when touched, and about Aunt Harriet’s momentous sexual liberation. Only when Iris, dressed in her aunts’ clothes, faces up to her own past, does Bertha’s house offer sufficient space for the future: together with Max, the brother of Rosmarie’s childhood friend, Iris starts a family of her own there. Despite the cases of death it describes, the novel is as colourful and life-affirming as Bertha’s garden, where the plants are closely associated with the fate of the family members: When Bertha’s sister dies, the black currents change colour overnight, and the ripe russet apples also herald a sea change.

Hagena’s second novel is different. Although she uses similar leitmotifs – here too, the thematic framework consists of moments of remembering and forgetting – the author strikes a rather dismal note in On Sleeping and Disappearing. Lightness gives way to the heaviness of sleep, a heaviness that Ellen, the somnologist, is lacking: during a restless night, the first-person narrator reviews her life, pondering her present situation in Hamburg and her past in Grund, a village on the Upper Rhine. Again and again, mysterious chasms yawn, especially after the disappearance of Lutz, the father of Ellen’s daughter Orla. Two other narrators shed some light on things: Lutz’s mother Marthe, and Ellen’s girlhood friend Andreas. The two of them are singers in the choir led by Ellen’s father Joachim, who with the help of Come, heavy sleep composed by John Dowland attempts to bring his demented wife Heidrun back out of a coma. In this novel too, nature serves as a projection screen for emotions: “In the movements of the grey herons’ necks I sometimes see the letters of his name. LUTZ”, writes Marthe in the diary she keeps about the choir.

A sea of signs

Hagena weaves autobiographical fragments into the highly detailed scenarios of Hamburg and the Upper Rhine region. And the voyage through the sea of signs, which the first-person narrator Ellen undertakes with the reader in the course of her sleepless night, recalls the theme of Hagena’s scholarly work: in Ulysses, James Joyce describes a day in the life of Leopold Bloom as he wanders around the city of Dublin. This in no way takes from the fictional quality of Hagena’s story, given that she also uses her novels to reflect on the relationship between poetry and truth. In The Taste of Apple Seeds Iris asks, “How true were the stories told to me, and how true were those I made up myself out of memories, assumptions, fantasies and things secretly overheard?” And in On Sleeping and Disappearing Ellen realises, “I have missed out, messed up on something, but what?”

Hagena is very skilled at this narrative approach with which she defines the skilfully structured family chronicles: she weaves present and past into a transparent fabric that provides deep insight into the inner life of her figures. The author handles her characters masterfully, embroiling them in secrets, causing them a sleepless night and a painful awakening. The texts abound in intelligent metaphor and linguistic brilliance. Because of the different time levels and narrators, the opening pages of her second novel require a certain amount of effort, but the investment is worth it. Compelling reading!

Christina Pfänder is a free-lance journalist in Frankfurt am Main.