German book industry
In a State of Flux 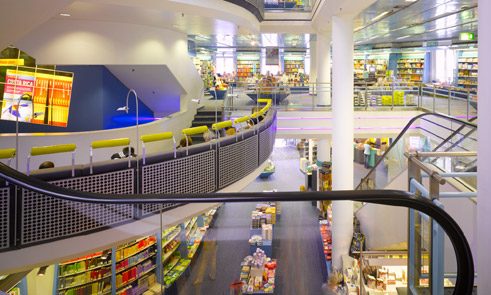 The German book industry appears to be on a rollercoaster ride at present. Many believe that the digital world offers opportunities – wherever there is light, however, there must by definition also be shade.

A certain cultural pessimism pervades reports of the German book industry, German literature and the reading habits of the Germans, though a closer look initially reveals no real reason to panic. According to a market analysis conducted by the Allensbach Institute, 67 percent of the women and 53 percent of the men surveyed bought books in 2013. There is a noteworthy though as yet modest trend towards eBooks: 5.3 percent of Germans read electronic books – the figures for 2013 and 2012 were just 3.3 and 2.6 percent respectively. In short, Germans still enjoy reading.

This buoys up spirits in the industry – though unfortunately only briefly in some cases. 2014 had hardly begun before there was bad news for Augsburg-based publishing group Weltbild: it had to file for insolvency. Many in the industry saw the collapse of this publishing giant, whose sales in 2012 totalled 1.59 billion euros, as the writing on the wall and feared a domino effect because the Hugendubel group – affiliated to Weltbild through a joint venture – was directly dependent on Weltbild, as indeed were many smaller publishing houses and suppliers. In the end, however, a skilful insolvency administrator and a willingness to compromise on the part of all the companies concerned allowed a more extreme outcome to be averted. In the late summer of 2014, Düsseldorf investment company Droege Group took over Weltbild as its majority shareholder. The joint venture with Hugendubel was dissolved and the company’s shops were shut down. Following a complete takeover of Buecher.de (with sales in 2012 of 51 million euros), the company is now dedicating its investments into the online business. There is a good chance of roughly 1,000 jobs being saved, first and foremost at the company’s Augsburg site.

In the black at last – albeit only just

The worst case scenario was avoided in the nick of time, in other words. As a matter of fact, it was by no means the case that the industry as a whole experienced a disastrous year in 2013. On the contrary, after two years in the red, the book publishing market returned to the black – albeit only just. All in all, book shops and publishing houses achieved sales of 9.536 billion euros with books and specialist magazines (as compared with 9.520 billion euros in 2012). That said, the encouraging progress made in 2013 did not give rise to any stable trend, as sales in the German book industry saw extreme fluctuations in the first half of 2014. Seasonal effects such as a late Easter were just one of many reasons. Shop closures also resulted in uncertainty: while the German Publishers and Booksellers Association still had 4,874 member book shops in 2000, the number had dropped to a mere 3,378 by 2013. Upon closer inspection these figures are no reason to sound the alarm bells, as not every branch of a chain is counted separately. While sales in physical book stores declined by 8 percent during this period (to just shy of 4.7 billion euros), Internet book sales soared by 208 percent (to 1.56 billion euros).

In a permanent state of flux

Physical book shops recorded sales of 4.639 billion euros in 2013; a year-on-year increase of 0.9 percent. Fiction remained the best-selling segment, accounting for 23 percent of total revenues (hardbacks and paperbacks). With an 11 percent share each, this was followed by books for children and teenagers, school books and textbooks, and non-books. The total number of books published in Germany is picking up again: 96,600 appeared in 2013, a 2.7 percent increase on 2012.

These figures are certainly nothing to be ashamed of, though the circumstances could hardly be any more difficult. After all, the book industry is in a permanent state of flux, with everyone searching for new ways to deal with the market situation that has become transformed by an accelerated pace, changing media consumption habits and new players. The Thalia chain, the market leader, believes for example that the way forward is to find the ideal size for its shops, meaning that huge book shops with a floor area of 1,000 square metres and more are probably a thing of the past. The other major market players can also be observed making similar strategic shifts.

The industry has also succeeded in coping with the changes as far as eBooks are concerned, with digital books having become a firm fixture of everyday business: 77 percent of all book shops stock them, and 65 percent of publishing houses include them in their ranges. The share of sales accounted for by eBooks has grown, though not as rapidly as in previous years. As yet, the market for electronic books is still relatively modest, with only 4 percent of all books sold – across all genres and book types – being digital. One reason may be their prices, which are only marginally lower than their printed counterparts. Price fixing laws in Germany prevent the sort of situation occurring that has been seen in the USA or Great Britain, where a price war resulted in victory for eBooks. This privilege could well fall away as a result of negotiations on the free trade agreement between the USA and the EU – with consequences that are impossible to predict. So far, most market players are hoping that powerful forces in France and Germany will successfully fight any approach based solely on market economics and will secure special status for books as a cultural asset.

Most industry experts also agree on another point: the digital transformation offers many opportunities, though at present it still poses a number of challenges to the book industry. This is particularly true of online business: the American giant Amazon, which makes only a small part of its sales with books, is synonymous with the Internet book trade. According to the Association of German Mail-Order Booksellers, its share of total online book sales is somewhat in excess of 70 percent.

This figure gives an idea of Amazon’s growing clout, and the pressure in negotiations between publishing houses and Amazon is correspondingly great: given the book price fixing laws that apply in Germany, discounts are the factor that ultimately determines whether or not a profit is made. It goes without saying that big companies that order in large quantities fare better in this situation. A dispute between the Bonnier Group (which encompasses the publishers Piper, Carlsen and Ullstein) and the retail giant was publicized: if Amazon sold a Bonnier eBook, it would receive around 30 percent of the selling price, yet Amazon was demanding 50 percent. In order to increase the pressure on Bonnier, Amazon had repeatedly delayed shipping of books (such as Harry Potter) published by the group.

A public protest by more than one hundred German-speaking authors, among them Nobel laureate Elfriede Jelinek, meant a setback for Amazon, especially since this made it more difficult for the online retailer to achieve its goal of tying key authors to it. In the run-up to Frankfurt Book Fair 2014, it was announced that a deal had been struck between Amazon and Bonnier, though Amazon had not been able to push through its maximum demands. This does not change Amazon’s long-term objectives in any way, however, and merely postpones the decision of whether the power structures in the book industry shift in favour of the near-monopolist.

Matthias Bischoff works as an editor and cultural journalist in Munich and Frankfurt.