Rafik Schami
Exile in his homeland 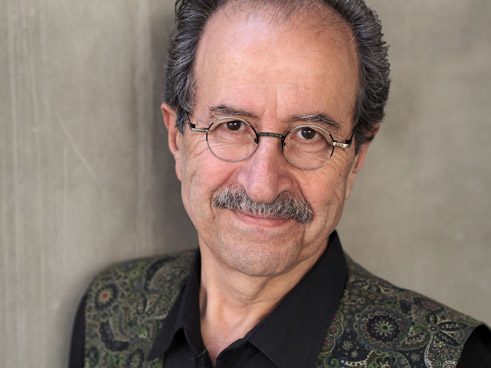 Rafik Schami is one of the most important writers of the German language. He came to Germany when he was twenty-five years-old; his homeland Syria he carries in his heart. It is the focus of many of his stories.

One of Rafik Schami’s most recent and at the same time oldest stories revolves round a barber whom the author visited at the age of 15. In the Syrian capital of Damascus, where Schami was born in 1946. It was said that the barber was an expert in worldly wisdom. And he was. Unfortunately, he botched his young customer’s haircut. The hair grew back. The story remained with the writer. It crops up again in his book Die Frau, die ihren Mann auf dem Flohmarkt verkaufte (i.e. The Woman Who Sold Her Husband in the Flea Market), published in 2011 by Carl Hanser Publishers. In the tale Schami tells how he became a writer.

Actually, Rafik Schami is named Suheil Fadel. He is the son of a baker, a Christian. At the age of 16 he founded a wall newspaper; at 25, with a suitcase of manuscripts, he emigrated to Heidelberg and there made for himself a new life. But before Schami went freelance as a writer, he first took a doctorate in chemistry. The language in which he now writes he learned by copying out classics by Thomas Mann and Johann Wolfgang von Goethe in long hand. Since 1982 the Syrian-born Schami has written in German. At readings held at the beginning of his career, there used to be only a handful of listeners. Today Schami’s work has been translated into 24 languages. His readings fill large halls. In the meantime the writer has become a German citizen. At the same time, he self-assuredly calls himself the “most successful Syrian writer in the world”. He remains a “friend from Damascus”, which is the meaning of the name “Rafik Schami”.

Homage to the land of origin

In the morning, when he wakes, says Schami, he thinks of Damascus. Wistfully. Happy when he can remember the city of his childhood. Concerned. His sister still lives in Syria. In the midst of a war. The stories he tells take place almost exclusively in the Syrian capital. His work is a homage to his crisis-ridden land of origin. In his prose Schami has preserved Damascus, where he is persona non grata and has not been for 40 years. Thanks to Google Earth and the heart’s blood of an exile, he is still in possession of accurate knowledge of the place. He has repeatedly given interviews on the political situation in Syria. Schami’s association “Schams” provides financial support for Syrian children and young people.

For his literary work Schami has been awarded numerous prizes. In 1994, for instance, for his book Der ehrliche Lügner (i.e. The Honest Liar), he received the Hermann Hesse Prize; in 1997, for his collected works, the Hans Erich Nossack Prize; and in 2011 the Georg Glaser Prize for Literature. The novels of the chemist are Syrian synaesthesias, especially Die dunkle Seite der Liebe (i.e. The Dark Side of Love), a broadly laid out carpet of dense-textured tales. Schami, who is a gifted narrator, writes in a fairy-tale-like tone that preserves in writing the fascination of the oral. Plenty of story and oriental bonus material.

Those who desire to know how Schami sees his work should get hold of his Die Frau, die ihren Mann auf dem Flohmarkt verkaufte (i.e. The Woman Who Sold Her Husband in the Flea Market), published in 2011. It provides something like a rationale for his literary work. One of the twelve chapters in this infectious self-declaration contains the slightly edited inaugural lecture that Schami held in 2010 when he accepted the Brothers Grimm Professorship at the University of Kassel. Here and there he writes on subjects such as the fairy tale as “popular therapy” and sayings as “concentrates of experience”. He also philosophizes about how the desert has shaped the eloquent but non-visual Arab culture; in the desert the eye rests while the tongue is loosened.

Stories instead of explanations

The book, a collection of short stories, episodes and speeches, is autobiographical poetics and ethnographic narrative. Schami of course would never put it that way. His gesture is that of strict perspicuity. He prefers narration to lengthy disquisitions, telling another story to explaining everything.

Schami has lived for decades in a village in the Rhineland-Palatinate. His thoughts are often with Syria. He feels at home in Germany, but one day wants to return to Syria. As victor over the regime. Until then, he will continue to write about being German and remaining a Damascene. At an event on the occasion of his lectureship in poetics at the University of Koblenz-Landau, he was once asked whether he, Rafik Schami, didn’t find himself in a paradoxical situation. Whether he wasn’t an exile in his homeland. “Yes”, he said, “that’s right”.