Comics about the Second World War
The normality of terror 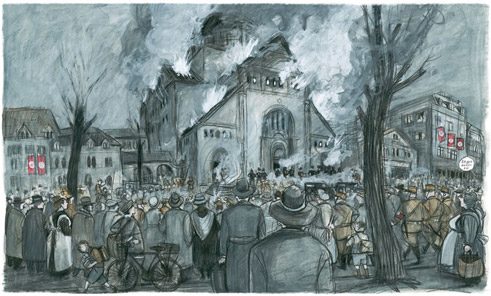 Up to now Germany has produced only a few comics about the Second World War. Two recent publications make a contribution to extending commemorative culture to this medium.

The range of German comics on the subject of the Second World War is modest: it extends from descriptions of the last days of the war from the civilian point of view (Die Entdeckung der Currywurst [i.e. The Discovery of the Curried Sausage]) by Isabel Kreitz, 1996, and Der erste Frühling [i.e. The First Spring] by Christoph Heuer, 2007), biographies of Holocaust survivors (Der Boxer [i.e. The Boxer] by Reinhard Kleist, 2011) and Adolf Hitler (Hitler by Friedemann Bedürftig and Dieter Kalenbach, 1989) to reflections on the effects of the conflict on the post-war generation (Kiesgrubennacht [i.e. Gravel Pit Night] by Volker Reiche, 2013). With the graphic novels Irmina by Barbara Yelin (2014) and Flughunde (i.e. Flying Foxes) (2013) drawn by Ulli Lust, this discourse has been enriched with two important voices – for new in both books is the attempt to approach the subject from the perspective of the perpetrator.

Flughunde is an adaptation of the eponymous novel by Marcel Beyer from 1995 and follows the story of, on the one hand, the fictional acoustical engineer Hermann Karnau and, on the other, the children of Joseph Goebbels, Reich Minister of Propaganda in Germany from 1933 to 1945. Their paths cross several times, for Karnau makes sound recordings for Goebbels before spending the last days of the war in the Führer bunker. At first Karnau is shown as a slightly eccentric but likeable nerd. He dedicates himself devotedly to his profession and makes his abilities available to the Nazis by chance. When he is to be drafted for the front, however, he saves his neck by working on experiments for the SS. From being merely a fellow traveller, he becomes an active collaborator and beneficiary of the system.

Graphic Novel “Flughunde” by Ulli Lust | © Suhrkamp Verlag Ulli Lust’s drawings focus on the visualization of sounds: they depict bombings and stadium speeches, the cruel voice experiments on concentration camp prisoners and even the sound of simple breathing. The predominantly abstract, associative illustration of these sounds evokes an immediacy that brings the depicted vividly to life. Even the well-known onomatopoeia of Disney comics such as “Groan” and “Sigh” gain a new depth when they issue from the mouth of Goebbel’s wife.

From maverick to fellow traveller

Irmina is the title character of the eponymous graphic novel by Barbara Yelin. The author takes the biography of her grandmother as the basis of the story. At the beginning, Irmina is presented as an unconventional young German who lives in London in 1934 as a trainee. Here she enters into a love affair with the dark-skinned student Howard from Barbados. Through a series of adverse circumstances, she must return to Germany, where she eventually marries the architect Gregor, a member of the SS. During the war she supports Gregor however she can. She echoes the rallying calls of the Nazis to all around her. In this way a maverick, who experienced xenophobia the hard way, turns into a fellow traveller. In her view, the Jews are responsible for their own calamity, and of her husband’s deeds on the Eastern front she wants to hear nothing.

Unlike Flughunde, the visual language of Irmina is very direct. It serves more clearly as a vehicle for the story. The drawings often show the protagonist close-up and so communicate the various phases of her life intimately to the reader. At the same time, scenes such as the burning of a synagogue are presented very forcefully across two pages, underscoring the conspicuous enormity of the events.

The Holocaust as a marginal phenomenon

Neither Irmina nor Hermann Karnau is presented as one of those diabolical Übermenschen who are so often the image given the Nazis in popular culture. But exactly this normalization spans an emotional bridge of identification to the reader. The Holocaust remains thereby a shadowy peripheral phenomenon, either deliberately ignored by the characters or else, as in the case of Karnau, actively joined in. But both books unmistakably put paid to the common defensive claim that “we knew nothing”.

A detailed overview of this subject from various angles is provided by the anthology Rechtsextremismus, Rassismus und Antisemitismus in Comics (i.e. Right-Wing Extremism, Racism and Anti-Semitism in Comics) of the Archive of Youth Cultures (ed. Ralf Palandt), 2011. Highly acclaimed new international comics on the theme include Die zweite Generation (i.e. Second Generation) by Michel Kichka and Das versteckte Kind (i.e. Hidden: A Child’s Story) by Dauvillier/Lizano/Salsedo (both 2014).

Dario Radišić works as a cultural researcher based in Berlin.