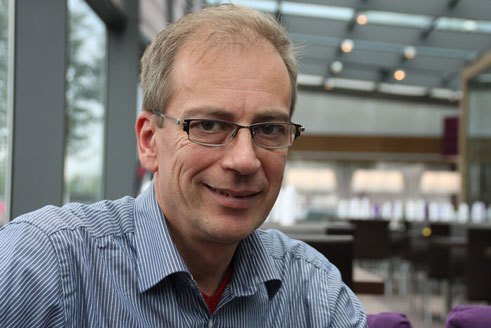 Mediator between worlds: Günther Orth translates Arabic literature into German. An interview about the challenges of language and the subtleties of the phrase “I want”.

Mr Orth, you interpret for politicians, scientists and artists from the Arab world. The German version of Fawwaz Haddad’s novel “Gottes blutiger Himmel” (Soldiers of God) is also by you. Currently you’re working on the translation of “Der Messias von Darfur” (The Messiah of Dafur) by Abdelaziz Baraka Sakin. How does a boy from Franconia come to the Arab world?

I have no Arab ancestors and no orientalists in the family. The first thing I ever heard about the Middle East was the Arab oil embargo against the West in 1974. I was then a small boy; what I picked up was that the Arabs want to make life difficult for us. Later two things worked together. I hadn’t seen much of the world; as a large family from Franconia our holiday radius was limited. Maybe that’s why I was attracted to the world with all its exotic cultures. Then I found learning languages easy and knew a student in Erlangen who travelled regularly to China on scholarships. I found that inspiring. So after taking my school-leaving certificate I looked into studying Sinology. On the same floor of the university was the Oriental and Islamic Studies Department. Since Sinology seemed to be full up, I decided to try Islamic Studies. The pace was very brisk, and after a week there were only 20 students; at the end of the semester only five.

Even many Arabs find it difficult to learn Modern Standard Arabic, particularly the grammar. How was the beginning for you?

Difficult. Everything was unfamiliar and hard to compare to European languages. But if right at the start you labour through the classical method and always learn the right endings -un, -in, -an, you can build on this later. As the joke goes: the first five years are difficult; after that it’s not too bad.

“An erosion of classical Arabic”

You learned Modern Standard Arabic, but in Arab countries the inhabitants speak various dialects. Was that disconcerting on your first trips there?

To learn Arabic is about as hard as learning four or five European languages. It’s very confusing when simple things such as the phrase “I want” can mean, depending on the dialect, ayiz, beddi, brid, dayir, ashti, bghiti, bhibb, abi…. In Modern Standard Arabic it means “uridu”, but that’s rather out of place in everyday life. A truly frustrating experience for someone who has laboriously learned classical Arabic and then travels to an Arab country and has to ask for directions! When I was at university, many Arabs still had a command of correct Modern Standard Arabic. For about two decades now it’s been apparent that this has become a rare expertise. Even writers make grammatical errors that I notice, because at the beginning of our studies and at the Language Institute of Damascus we were tormented with the fine points of syntax and declensions. In Arab schools that’s evidently no longer the case. The result is a real erosion of classical Arabic.

You work as an interpreter, but also translate Arab literature. What are your criteria for selecting a book to translate?

When it’s up to me, then my decision is based on what I like and whether the book will remain a strong text in German translation. When I receive a commission for a translation, the first thing I do is make sure I consider the work to be valuable. The public should be given texts that testify to the vitality and creativity of Arab literature. Literature shouldn’t be translated for purely financial reasons. But it happens all too rarely that you’re commissioned to translate Arab literature. Usually it’s the case that I discover something interesting and would like to translate it, but can’t find a publisher. There isn’t much curiosity here about the work of Arab writers.

What difficulties does Arab literature harbour for the translator?

Essentially the same ones as translators from other languages have to do with. You must be creative to render literary devices as elegantly and precisely as possible, without it sounding forced or outlandish in the target language. Many metaphors don’t work in German, so they have to be recast. It’s a process of endless decision-making. Only with practice does this agony become a pleasurable affair and you realize where you should soften or intensify, smooth, stretch or restructure; in short, how you “say more or less the same thing, but in other words”, as Umberto Eco has described it. Difficult about Arab literature is that much that concerns religion and aspects of everyday cultural life is only alluded to. In German this has to be elaborated so that everyone understands it.

Günther Orth, born in Ansbach in 1963, studied Islamic Studies, geography and sociology, and received his doctorate with a dissertation on modern literature in Yemen. He lives in Berlin.

Abderrahmane Ammar conducted the interview. He was born in Morocco in 1982, studied in Marrakesh and Bamberg, and is an Islamic scholar and freelance journalist.