Garbage: All about the most annoying thing in the world – The trend in 2019 is still towards envi-ronmental topics. | Photo (detail): © Beltz und Gelberg Verlag

In 2019 the market for children’s and young adults’ books in the German language is also placing its emphasis on socially relevant topics, focusing on the protection of our natural habitat and environment or on female role models.

Taking a stroll in the spring of 2019 through the halls of the Leipzig Book Fair and browsing along the shelves, above all, made one thing quite clear – children’s and young adults’ books in the German language have adopted a clear position. A position that has remained faithful to the trend of previous years, enabling such issues as equal rights, our natural habitat and environmental protection or politics, along with fantasy series and stories about family, friendship, conflict, love, puberty, adolescence, illness and death to secure a permanent place on the children’s and young adults’ book market. The topics, whether new or rediscovered, are to be found both in the narrative program – from the picture book to the young adults’ book – as well as in the non-fiction book.

The “Fridays for Future” movement shows not least that children and adolescents are actually very much interested in their environment, in their natural habitat and climate protection, motivating young people around the world to make their voices heard and demonstrate for more climate protection. The children’s and young adults’ book market has been promoting this steadily growing interest for several years, addressing the undisputed and urgent need for nature conservation and animal welfare, biodiversity, sustainability and environmental awareness.

The environment and climate protection are important to children and young readers – this is preva-lent in both narrative literature as well as in non-fiction books | Photo: © Thienemann Verlag | Oetinger Verlag | Beltz und Gelberg Verlag This spring, non-fiction books like Müll: Alles über die lästigste Sache der Welt (i.e. Garbage: All about the most annoying thing in the world), Paulas Reise: oder Wie ein Huhn uns zu Klimaschützern machte (i.e. Paula’s Journey: or How a chicken Turned us into Climate Protectors) or Seltene Tiere. Atlas der bedrohten Arten (i.e. Rare Animals. An Atlas of Endangered Species) aim to inform and sensitize us to environmental and climate issues. The autumn program of various publishers also promises further new non-fiction books on global warming and nature conservation. There are also some narrative picture books, such as Der grüne Riese (i.e.The Green Giant) or Juju und Jojô. Eine Geschichte aus der Großstadt (i.e. Juju and Jojô. A Story from the Big City), which embrace the beauty of natural habitats and the need to preserve them. The latter two books also stand for the book market’s concern for diversity when it comes to the way child protagonists are portrayed - the girls Bea, Juju and Jojô are dark-skinned.

While ethnic and cultural diversity are somewhat slow at gaining a foothold in children’s and young adults’ literature, gender equality has been one of the constantly recurring themes of recent years. This is shown not only by non-fiction books such as Feminismus (i.e. Feminism) from the Carlsen Klartext series, but in particular by all those biographies that are published in series or as anthologies of extraordinary female lives - often following the pattern of the 2017 bestseller Good Night Stories for Rebel Girls. Volumes like Frauenpower made in Europe: Große europäische Frauen im Porträt (i.e. Women’s Power Made in Europe: Portraits of Great European Women ) or the graphic novel Rebellische Frauen – Women in Battle: 150 Jahre Kampf für Freiheit, Gleichheit, Schwesterlichkeit (i.e.Rebellious Women - Women in Battle: 150 Years of the Struggle for Freedom, Equality, and Sisterhood) portray strong, combative women standing up for their rights, ideals, and dreams. They should serve adolescents of every gender as role models. The portraits are selected and presented in such a way that they provide an exciting overview and historical comparisons. 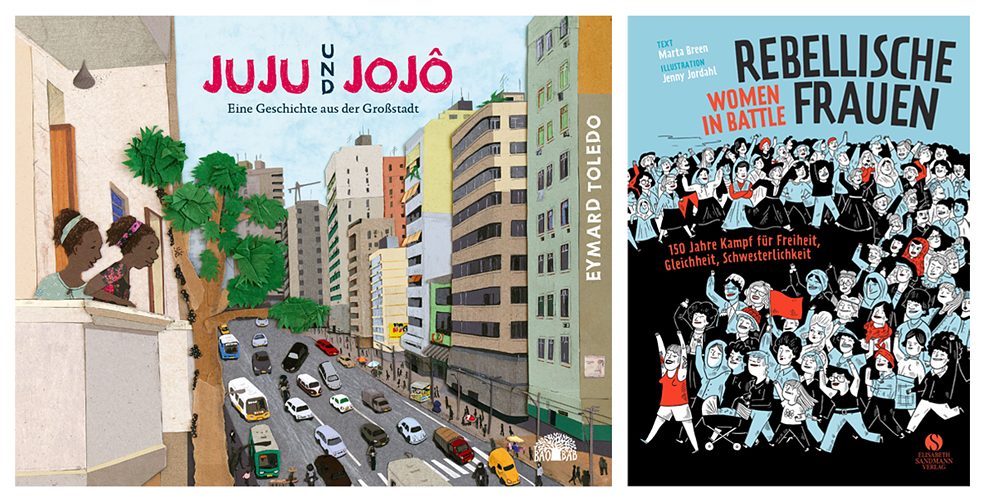 Girls from migrant backgrounds as protagonists and anthologies about strong women – the focus is also on current socio-political issues in the children’s and young adult books sector. | Photo: © Baobab books | Elisabeth Sandmann Verlag The internationally oriented book series Little People, Big Dreams, which has been on the market in German since spring 2019, has focused on a much younger target group. Each chapter devotes 32 pages to a “rebellious woman who changed the world with her childhood dreams”, introducing the readers to such people as Marie Curie, Rosa Parks, Coco Chanel, Frida Kahlo or Anne Frank. Books such as Stories for Kids Who Dare to be Different want to show that above all it takes courage and a strong will to make a difference.

There are numerous picture books, children’s and young adults’ novels around at the moment that tell their readers just how important it is to be courageous, to take a stand for oneself and others, and to go through life with a self-determined approach. They deal with political, social and historical issues as well as with the private worries, hardships and handicaps of the protagonists. Here, too, children’s and young adults’ books have adopted a firm position in these times that are permeated by fear and uncertainty.