Authors on the road

Throughout the Year of German-American Friendship, BOOKS FIRST showcased several German-language authors in the United States.

At numerous events hosted by the Goethe-Institutes, book shops and festivals, the authors presented their recently translated works and answered audience questions. 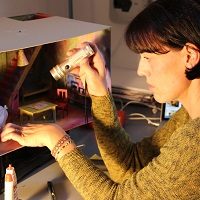 © Antje Damm Antje Damm is a celebrated children’s writer and illustrator. Born in 1965 in Wiesbaden, Germany, she now lives with her husband and four children in a half-timbered house near Giessen. She has worked as an architect and has written and illustrated over a dozen books for children. The Visitor, was selected as one of ten New York Times / New York Public Library Best Illustrated Children’s Books of 2018.

For the book Antje Damm creates a diorama from cardboard and photographs the scenes, giving the illustrations a special luminosity and depth. In workshops with children she showed them how the book was made. They also discovered the story of Elise, an anxious and shy woman, who meets Emil, a curious little boy. The little visitor brings color into her live and unwittingly changes everything. 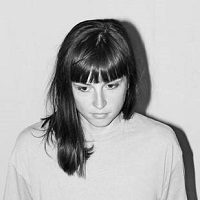 © Jürgen Beck Dorothee Elmiger is considered one of the most promising Swiss writers. Her debut novel Invitation to the Bold of Heart (published by Seagull Books) received the Ingeborg Bachmann Prize and the Kelag Prize in 2010. In 2014, Elmiger received the Hermann-Hesse-Förderpreis for her second novel, the German-language edition of Shift Sleepers and in 2015 she was awarded a Swiss Literature Award by the Federal Office of Culture and the Erich Fried Prize.

Somewhere deep in the European forest the Shift Sleepers meet. Frontier workers, smugglers, refugees, workers, asylum seekers, inspectors, artists, musicians, actors, journalists, scholarship holders, logisticians, students, and ghosts. They come from everywhere. They are all representatives of our time, and they have conversations about origins and justice; body and state; import and export; homeland and migration. They talk together about happiness, music, and death.

These events were organized in cooperation with Pro Helvetia. 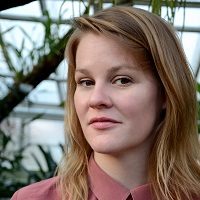 © Rosanna Graf Theresia Enzensberger was born in 1986 in Munich and now lives in Berlin. She studied film at Brand College in New York and works as a freelance journalist for publications including the Frankfurter Allgemeine Zeitung, Zeit Online, Krautreporter and Monopol. In 2014 she founded the award-winning BLOCK magazine.

Blueprint is her first novel about the young and inquisitive Luise Schilling who arrives at Weimar's Bauhaus University at the beginning of the turbulent twenties. She takes classes with professors such as Gropius and Kandinsky and throws herself into the dreams and ideas of her epoch. From technology to art, communism to the avant-garde, populism to the youth movement, Luise encounters the social utopias that still shape us to the present day. She has ambitions of achieving a great deal in life - but little of it has to do with paying homage to great men. 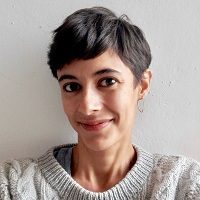 © Aisha Franz Aisha Franz is a Berlin-based comic book artist. She studied illustration at Kunsthochschule Kassel, a college of fine arts in Germany. In her work, she explores the possibilities of self-publishing while trying to push the boundaries of storytelling within the comic medium.

She has published three graphic novels, her latest being Shit is Real. Aisha Franz is a master of portraying feminine loneliness and confusion while keeping her characters tough and real. Her artwork shifts from sparseness to detailed futurist with ease. Her characters fidget and twirl as they zip through a world both foreign and familiar. Base human desires and functions alternate with dreamlike symbolism to create a tension-filled tale of the nightmare that is modern life. 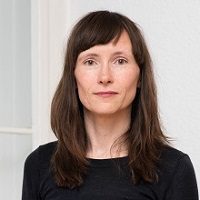 © Andrzej Steinbach / Spector Books Heike Geissler is a fiction writer from Leipzig, Germany. She teaches creative writing in Halle/Saale and Leipzig. Rosa, her first novel, was awarded with the Alfred Döblin Prize for debut fiction in 2001.

Her critically acclaimed non-fiction-novel Seasonal Associate earned her a fellowship by the German Academy Rome Villa Massimo in 2017. In the book, Geissler takes a seasonal job at Amazon Order Fulfillment in Leipzig when she is no longer able to live on the proceeds of her freelance writing and translating income. But the job, intended as a stopgap measure, quickly becomes a descent into humiliation, and Geissler soon begins to internalize the dynamics and nature of the post-capitalist labor market and precarious work. Geissler has written a twenty-first-century account of how the brutalities of working life are transformed into exhaustion, shame, and self-doubt. 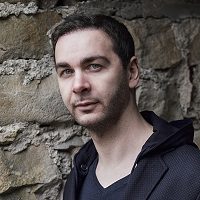 © Marvin Ruppert Pierre Jarawan is an author, slam poet, stage writer, organizer and presenter from Munich. He was born in 1985 as the son of a Lebanese father and a German mother in Amman, Jordan, after his parents had left Lebanon because of the civil war. Since 2009 he has been one of the most successful stage poets in the German-speaking world.  Pierre Jarawan lives in Munich.

The Storyteller is Pierre Jarawan's first novel. Samir's parents fled Lebanon to Germany shortly before his birth. When his beloved father disappears without a trace, Samir is eight. Now, twenty years later, he sets off for the land of the cedars to solve the mystery of this disappearance. A family story, touching, surprising and masterfully interwoven with the fate of the Middle East. The book was on the SPIEGEL bestseller list. 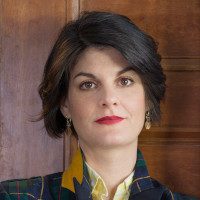 © Nina Subin Nora Krug’s drawings and visual narratives have appeared in publications such as The New York Times, The Guardian, and Le Monde diplomatique. Her animations were shown at Sundance, and she is the recipient of fellowships from Fulbright, the John Simon Guggenheim Memorial Foundation, the Pollock-Krasner Foundation and others. She is an associate professor in the Illustration Program at Parsons School of Design in New York and lives in Brooklyn.

Belonging wrestles with the idea of Heimat, the German word for the place that first forms us, where the sensibilities and identity of one generation pass on to the next. In this highly inventive visual memoir—equal parts graphic novel, family scrapbook, and investigative narrative—Nora Krug draws on letters, archival material, flea market finds, and photographs to attempt to understand what it means to belong to one’s country and one’s family.

Jo Lendle - All the Land 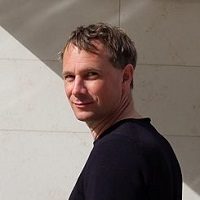 © Linnea Buehler Jo Lendle is a German author and, since early 2014, the head of Hanser Verlag, Munich. Before Hanser, Lendle worked as a lecturer and program manager for German literature. He is member of the board of the Munich Literature House and the Publishers Committee of the Association of German Publishers and Booksellers.

How, in 1930, did Alfred Wegener, the son of minister from Berlin, find himself in the most isolated spot on earth, attempting to survive an unthinkably cold winter in the middle of Greenland? In All the Land, Jo Lendle sets out to chronicle Wegener’s extraordinary journey from his childhood in Germany to the most unforgiving corner of the planet, giving us the story of this great adventurer, of the experiences that shaped him, resulting in a tale that is both thrilling and tender. 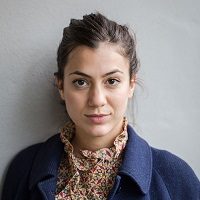 © Dirk Skiba Michelle Steinbeck, born in 1990, is a Swiss author, curator and editor. She writes stories, poetry, plays, columns, and reportages. Steinbeck also organizes literary events for young writers and is editor-in-chief of the Zurich-based magazine Fabrikzeitung.
Her first novel My Father was a Man on Land and a Whale in the Water was both nominated for the Swiss and the German Book prize in 2016:

A child attacks Loribeth with an iron while she is sleeping. In retaliation Loribeth throws the iron onto the child from an upstairs window, packs the damaged body into a suitcase and sets off on her travels.
Thus starts Steinbeck’s unusual, poetic novella about a young woman’s transition from childhood to adulthood. Loribeth and her suitcase begin an odyssey through nightmarish locations in search of her absent father. What ensues is a Freudian adult fairytale in this exciting debut.

These events were organized in cooperation with Pro Helvetia.

Benedict Wells - The End of Loneliness 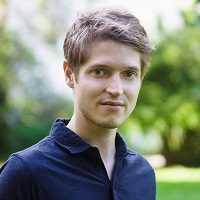 © Roger Eberhard Benedict Wells, born in Munich in 1984, moved to Berlin after completing school in 2003. He decided against university to concentrate on his writing, earning a living with various jobs. His widely praised debut Beck’s Last Summer was published in 2008 and adapted into a film in 2015. After several years in Barcelona, Benedict Wells has returned to Berlin. His books have been published in 34 languages.

Wells' fourth novel, The End of Loneliness, spent more than a year and a half on the Spiegel bestseller list and was awarded the 2016 ›European Union Prize for Literature ‹, among other awards. »A difficult childhood is like an invisible enemy: you never know when it will come for you.« Jules and his brother and sister Marty and Liz are all very different, but a tragic event marks all their lives. Having grown up in idyllic circumstances, they lose their parents in an accident. Although they are all sent to the same boarding school, each of them goes their own way, becoming strangers to one another and losing contact. Jules in particular, once a paragon of confidence, withdraws more and more into a dream world. The only friendship he makes is with the mysterious Alva, but he will only realize what she means to him years later – and what she has never told him. When Jules meets Alva again as an adult, it looks like they could make up for lost time. But then the past catches up with them. 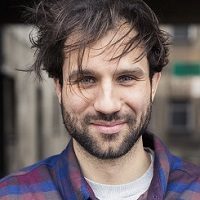 © Sven Döring Takis Würger is a journalist and author. He studied Human, Social, and Political Science at St. John’s College Cambridge for a year. During this time, he boxed for the University, broke two ribs and his hand, and became a member of the Adonians, the Hawks’ Club, and the Pitt Club. Named one of Medium’s “Top 30 Journalists under 30,” alongside other accolades, his work as a journalist has taken him to Afghanistan, Libya, Mexico, and Ukraine.

The Club, which won the lit. Cologne debut prize and has become a runaway bestseller in Germany, is his first novel. It is a blistering and timely novel set at Cambridge University, centering around an all-male dining club for the most privileged and wealthy young men at Cambridge and following an outsider who exposes the dark secrets of this group, the Pitt Club. 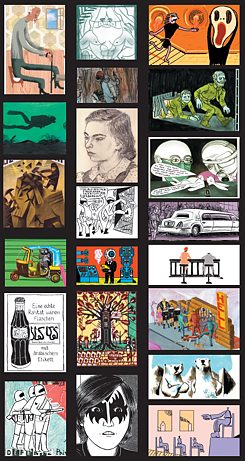 © Le Monde diplomatique 2019 Since 2005, the last page of the German edition of Le Monde diplomatique has featured a comic strip. Over the years, renowned illustrators and comic-strip artists have created remarkable contributions - and brilliantly mastered the particular challenge of the large page format as well as the limited narrative space. The comics created this way cast an unpredictable, often absurd and sometimes melancholical glance at politics, everyday life and culture. The concept refers back to the beginnings of modern comic strips, which emerged at the end of the 19th century as the icing on the cake of newspapers traditionally adorning the last page.

For the first time, a great poster exhibition will show a selection of German-speaking artists published in Le Monde diplomatique over the last few years. Over 40 posters will give an overview of the German comic and graphic novel scene: Stars and pioneers like Anke Feuchtenberger or ATAK meet established artists such as Barbara Yelin or Jim Avignon, joined by young talents such as Anna Haifisch and Robert Deutsch.