Carolin Emcke
“I Became a Journalist in Order to Educate” 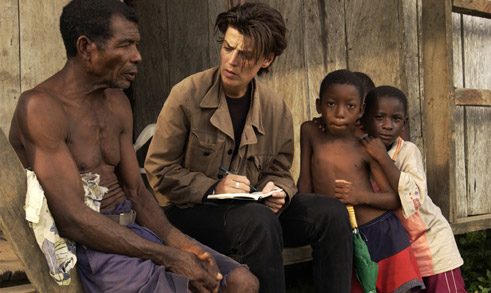 She pleads for “bearing witness out of responsibility” and in her reports from crisis and war zones gives the victims a voice. Carolin Emcke is the sensitive observer and critical thinker among German journalists.

Mrs Emcke, you studied philosophy, politics and history in London, Frankfurt am Main and at Harvard, and then took a doctorate with a dissertation on the concept of “collective identities”. Why did you then decide to go into journalism?

I never felt it to be a contradiction. I was trained in the tradition of Critical Theory and the Frankfurt School, and this still forms the structure of my thought. With this theoretical framework I wanted to interrogate phenomena in the world, to intervene in the public sphere – and therefore became a journalist: to bear witness, to formulate criticism, to educate.

Is there a subject that particularly inspired you to become a journalist?

No. I was already working parallel as a journalist during my university studies. Though first in television. Basically, I’ve thought less about what the best language or best genre could be and more about questions of violence, of injustice, of the exclusion of people who are excluded for various reasons, with a view to observing and offering criticism. I’ve always been trying to pursue both: theory and journalism.

The desire for “re-humanizing” the victims

At the core of your reporting from war and crisis regions are the victims of violence. Is for you writing about torture, ill-treatment and deprivation of rights a contribution to promoting more justice?

Writing about victims of violence is in fact a normative activity, but also an aesthetic strategy. People who have been the victims of structural and physical violence for a long time experience this violence as a negation of their humanity. They are no longer perceived as individuals, as subjects with their own rights and dignity. They lose faith in the idea that anyone at all could recognize the face of humanity in them. To see them again as members of human society, to listen to them, to tell their stories so that they are given a voice – all this can never undo what has happened to them. To think this would be naïve and false. But the effort is in keeping with the desire for “re-humanizing” the victim, as Geoffrey Hartman once called it. To give them a voice or let their own voices be heard. Naturally this is also meant to subvert the original intention of the perpetrators, namely to exclude or even obliterate these people.
Video: talk with war correspondent Carolin Emcke (Youtube.com) | © DW

You also call your essay "Weil es sagbar ist” (i.e. Because It Can Be Said), published in 2013, a “Plea for Bearing Witness Despite Everything”. What do you mean?

If you have thought about violence, if you have listened to its victims, you soon reach the limits of the comprehensible. Excessive violence seems incomprehensible: you don’t want to believe what the victims say is true. And often they are themselves so affected, so maimed, that they can tell their stories only haltingly. Always along a ridge of silence. The stories of victims of violence aren’t always linear. Sometimes they tell them backwards, omit something that is too painful to remember. To this extent, there’s no “simple” narrative. It requires an awareness of the threshold of the sayable. I don’t believe in the “indescribable”. I think it’s negligent to declare something that’s difficult to tell “unsayable”. But it demands careful listening and an awareness of fractures. That’s what I mean by bearing witness despite everything.

Self-critical doubt about your own role

Where does your moral commitment come from?

It goes without saying. I’m always amazed that today those who make an effort to reflect ethically and question things politically have to justify themselves. And not those who walk through the world indifferent and cynical. There’s something skewed about this.

What is the task in your opinion of the readers of your texts?

You often write very personally and tell how close you come to the fates of those you write about. In your view, how much “I” can journalism take?

Oh, the question about the “I”. I always have to smile to myself about this one. Augustine, Descartes, Rousseau, Camus – they’re all writers who enriched their philosophical reflections by resort to an “I”. Use of the first person doesn’t mean the text is only about the author. The subject and the object of the text always remain different. In my use of the “I” I’m mainly concerned with laying bare my position. Subjectivity here serves not self-regard but transparency of perspective. I consider the purported “objectivity” of a journalism that conceals its own position or seriously believes it’s always detached as unreflective. On the other hand, journalism that’s interested only in itself is dreadful. But that’s not the point here. It’s rather about self-critical doubt about your own role so as to make visible your weaknesses, to make yourself more vulnerable.

Plea for slow reporting instead of event journalism 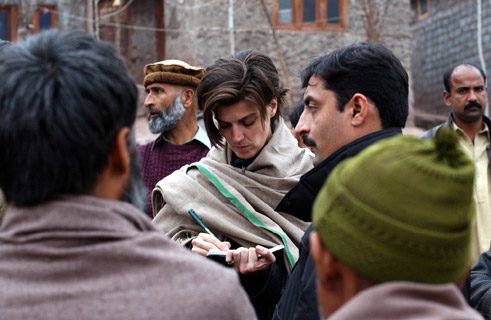 Carolin Emcke in the refugee camp kManik Pian 1 in Kashmir near the Pakistani city of Muzaffarabad; | © Sebastian Bolesch In your opening address to the annual conference of Netzwerk Recherche in 2010 you said, with a view to the 2008 financial crisis: “I think it needed a journalism that does not gratuitously make an ideology its own merely because it happens to prevail”. What did you mean? Has journalism today come to fit in too much?

Journalism now is in a different phase than in 2010. At present publishers are dominated by fear for their existence. It’s not certain how journalism can finance itself in future. Owing to the Internet a generation has grown up which takes for granted that information and reporting are available for free. I think if good, critical and committed journalism is to survive, it must provide reasons for people to spend money on us. There must be some added value; it can consist in readers recognizing how much effort has been put into research, how much knowledge lies behind a story, how accurately someone has observed events … whatever. I think this will probably include journalism’s developing out of hurried event journalism back into slow reporting.

After several years at “Der Spiegel” you worked for “Die Zeit”. Now you describe yourself as a freelance journalist. Are you still on the move as a reporter?

I’m currently working on a new book. I’ve been on the move researching it for three years – there’s been no time for other travelling. But I hope that focussing for such a long time on a subject will pay off.

On 23 October 2016 Carolin Emcke receives the Peace Prize of the German Book Trade.

From the statement of the jury:
“In her highly personal and vulnerable manner, Carolin Emcke regularly places herself in perilous living situations in order to illustrate – especially in her essays and reports from war zones – how violence, hatred and speechlessness can change people. She then uses analytical empathy to call on everyone involved to find their way back to understanding and exchange.”