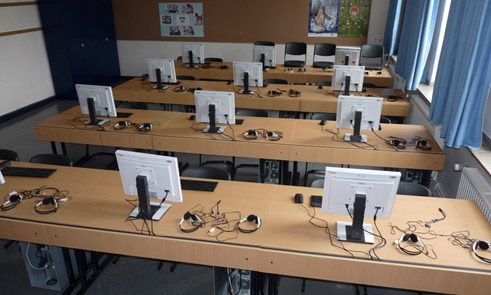 An international comparative study on digital literacy attests German youth only average skills. The government wants to equip schools better and adapt the curricula. But is this enough?

In an increasingly digital society, schools should teach young people a competent and critical approach to new technologies. So at least says the introduction to the study International Computer and Information Literacy Study (ICILS), which was published in the autumn of 2014. Since then it has triggered debates in the German public. For so far the German school system has contributed little to the educational goals defined by the study.

ICILS compares computer and information-related skills in twelve to thirteen-year-old schoolchildren in twenty-one education systems worldwide. These are skills that make possible the “use and evaluation of computers and new technology for researching, designing and communicating information in order to take part successfully in life at home, in school, at the workplace and in society”.

Great scepticism of the teachers

In Germany, according to the results of the study, digital skills in this form are lacking in nearly 30 per cent of young people. “These are schoolchildren who have so little or only such rudimentary knowledge of the competent handling of new technologies and digital information that we must assume they will have great problems in future”, says the school researcher Birgit Eickelmann of the University of Paderborn, who together with Wilfried Bos, professor at the Institute for School Development Research at the Technical University of Dortmund, headed the ICILS study. For Eickelmann the situation is comparable with the results of the first international school assessment survey, PISA, from December 2001. In this study too an astonishing number of German schoolchildren were attested below average knowledge in the area of mathematics. “It was nearly 25 per cent. For digital skills we’re at 30 per cent. The situation therefore is actually even more dramatic.”

Why is that? Here too ICILS provides clues. The majority of schools in Germany, it says, are currently unable to offer schoolchildren support in the area of digital education. This is partly because of the equipment available to the schools, which in international comparison is inadequate: stable, sufficiently broad Internet connections are scarce, as is on-the-spot technical help. Moreover, teachers look upon new, digital learning concepts with great scepticism. “The German education system has so far hardly any idea of how to make new technologies useful in the classroom. Instead the fears of the teachers predominate, and pupils are distracted from the actual learning content”, says Eickelmann. “In regard to the use of new technologies in schools, we’re in last place internationally.”

Debates on opportunities and risks

This scepticism appears to be fed by a peculiarity of the German approach to the issue of digital education. There is hardly another country where the possible risks of the use of digital technology are more in the public eye. For example, in their book Die Lüge der Digitalen Bildung (i.e. The Lie of Digital Education) Gerald Lembke and Ingo Leipner argue that children are in the position to use computers, laptops and smartphones productively only after the age of twelve. Before this, they say, use of digital technology leads to overstimulation.

Proponents of digital technology, on the other hand, like to refer to a whole series of successful projects in which it is already used in schools; for instance, the so-called MINT Excellence Schools. “Here to some degree we’re already well-positioned”, says Eickelmann. The education journalist Christian Füller is also fundamentally convinced of the added value of digital learning, particularly in collaborative work such as pupils’ blogs. “The positive, motivating effect is really amazing.” He thinks the risks and side-effects, however, under which he includes bullying and digital exhibitionism, are equally important to heed. He demands “a mandatory Net traffic license, which would help to teach young people how to move safely through cyberspace”.

In July 2015 the German Bundestag passed a proposal to provide schools with better broadband connections and to create a “safe digital learning environment”. The proposal also aims to establish digital education more strongly in the curricula – for example, in the form of a new mandatory school subject of computer science.

For the education researcher Eickelmann this foray is praiseworthy. “We have to equip our schools better”. On the other hand, she also stresses that ultimately this is about much more than simply making broadband, laptops, tablets and a fast Internet connection available to schools. “It’s much more important to train teachers in this field, so that they know how to make sensible use of the equipment.” In the end, says Eickelmann, decisive is not only improved technical facilities but also the willingness to develop the handling digital information as a key interdisciplinary skill.

The education researcher and journalist Martin Lindner has put the matter this way: we should say goodbye to the idea that digital media are “tools” you can take in the hand for specific purposes and for a limited length of time. “In reality they have long become a fixture of our life-world. Digital learning simply means leaning under the conditions of a digital society. It’s inescapable.”