“Photographers these days have to be very careful”

What am I photographing, what is the legal situation? | Photo (detail): © Friederike Steinberg

Street photography in Germany can really be quite tricky – if passers-by are in the picture, the photographer can quickly find himself in court. Lawyer, Thomas Schwenke, explains which shots are allowed.

Mr. Schwenke, today the smartphone has led to more photos than ever being taken in Germany. In many a snapshot, however, people we don’t know often end up in the picture. Is this legally a problem?

From a purely legal point of view, rights are being infringed on all the time, such as violations of the right to privacy, as is the case with Snapchat. However, such violations rarely make it to the courts. The problems only arise in extreme cases, for example, when someone is photographed in the sauna or on the beach.

In Berlin, Espen Eichhöfer, photographer at the renowned Ostkreuz photo agency, shot a person walking along the street in a leopard-skin coat. The person depicted saw this as a violation of the copyright regarding her own image and filed a claim against its publication. The court ruled that he was not allowed to display the photo. In addition, that he had to pay the legal costs. What laws does a street photographer have to observe? 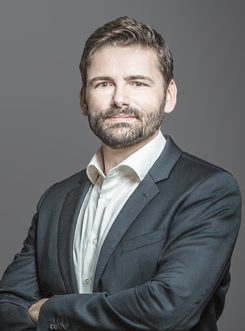 Dr. Thomas Schwenke | Photo (detail): © Nils Wiemer Wiemers We have a whole conglomerate of laws. There is, on the one hand, Paragraph 22 of the Kunsturhebergesetz (the German law regulating copyright for works of art). This regulation came into effect in 1907, after two photographers took pictures of Chancellor Otto von Bismarck on his deathbed. Paragraph 22 prohibits the publication or dissemination of images of people without their consent, if the depicted persons can be recognised – and this is very easy, for example, if the depicted person has a striking haircut or a tattoo. However, consent is not only required when a professional photographer exhibits the picture or places it in the newspaper. It is also necessary when an amateur photographer sends the image to a few friends via WhatsApp.

But doesn’t street photography live from situations being captured very quickly and, of course, published. Does Paragraph 22 then not significantly restrict artistic freedom?

The exceptions are set out in Paragraph 23 – if the people depicted are merely “accessories” to a scene – for example, in a landscape photo – the picture may be published. But in the case of Eichhöfer, the lady is not an “accessory”, but the main focus of the shot. A further exception are public events, i.e. people on stages or at demonstrations. Like Mr. Eichhöfer, photographers can also invoke a higher interest in art, but even in the name of art, the privacy of a person must not be violated. Photographing mourners in a cemetery without asking for their permission is not allowed - even if the images would be a strong motif for an exhibition. Whether the rights of the artist outweigh the privacy rights of the people being photographed, is different from case to case. You notice that it is often very difficult to make a distinction. A street photographer has to be able to assess a situation very quickly – what am I photographing, what is the legal situation? And there is another problem – according to the law even the actual photographing itself can be an offence, if the image is a drastic invasion of a person’s privacy or even intimate sphere.

To prevent a person’s helplessness being displayed

Such infringements of privacy rights by means of photographs is also subject to Paragraph 201a of the German Criminal Code. This was made more stringent in 2015. What does it refer to?

Paragraph 201a refers to special violations of highly private areas of a person’s life, such as someone being photographed in his home, or in a changing room. It could, for example, be my garden, around which I have put up a high hedge, because I like to sunbathe in the nude – and then a drone hovers over the garden and photographs me.

Why was the paragraph made more stringent?

In 2015 it was supplemented, among other things, to prevent a person’s helplessness being displayed. Think about accident victims being photographed by rubbernecks. On the Internet, in particular, pictures are frequently posted which make fun of the misfortunes of other people. A further clause has been added to Paragraph 201a – a person can also be charged with a criminal offence or pay a fine, if he or she has seriously damaged the reputation of the person depicted with the image. However, this can be interpreted very broadly – what exactly can seriously damage the reputation of the person in the image? Perhaps when he or she is somewhat corpulent and clumsy and awkward on the dance floor? So far there have not been so many of these disputes, because the regulations are new. The bottom line is – photographers have to be very careful these days.

The offence has to have been committed intentionally. If I stop immediately and say, “Oh, I had no idea at all you were lying undressed in the garden,” then I will not be punished.

the network of cameras is becoming tightly knit

Are the German regulations particularly tough compared with other countries?

I would say we are actually about average. All these regulations are, at least in Western countries, part of a unanimous approach. As the protection of privacy does not only exist in Germany, the regulations correspond to those in other countries. In the United Kingdom or in the USA, however, it is more likely to be decided on the basis of specific cases whether the law has been infringed.

Germany already has around 50 million smartphone users, millions of people have a camera with them around the clock. What is all this leading to?

I think, sooner or later, we will have to assume that when we are outside on the streets we could potentially end up in a photo or a video. Mini drones, data goggles, every car today has a built-in camera – the network of cameras is spreading all the time and becoming more and more tightly knit.

Dr. Thomas Schwenke is a lawyer in Berlin. He advises companies, agencies or portal operators on questions of data protection, copyright and trademark law, as well as the laws regulating social media marketing. In addition to his work as a lawyer, he holds lectures on these topics, has published books and he also has his own blog.

Friederike Steinberg
asked the questions. She is a free-lance journalist in Berlin and an online editor at Rundfunk Berlin-Brandenburg (rbb).