Emma, one of the first German feminist magazine, was launched in January 1977. Ever since then the magazine has been tireless in its efforts to embrace uncomfortable issues. Even after 40 years, its founder, publisher and editor-in-chief, Alice Schwarzer, is as feisty as ever. An Interview.

Ms. Schwarzer, “Emma” was and still is a project that is very close to your heart – so much so that you even financed the first edition yourself!

At that time, I was not the only one who came to the conclusion that we, as dedicated female journalists, needed to have our own independent voice. We had in fact, up to that point, been able to publish some critical articles in the media, but whenever it came to so-called “women's issues”: abortion, violence, sexuality, etcetera, the editorial departments suddenly stopped us. With the rise of the women's movements in the West in the late 1960s and early 1970s, women's issues had become political and volatile, and the men wanted to deal with them alone. You women are not objective, they said. We female journalists were more and more shut out when it came to the issues we were allowed to work on. We had to have our own independent voice! The first step was taken by Gloria Steinem in the USA with Ms. – and that was clearly an incentive for Emma. Shortly after Emma, F-Magazine came out in France. And then there was La Vie en Rose in Canada. Emma today is unfortunately the last of all these professional, feminist magazines to have survived. We finance ourselves from the sale of the magazine and are totally independent.

For 40 years, you have been publisher, editor-in-chief and author of "Emma". What issues have been particularly important to you during this time? 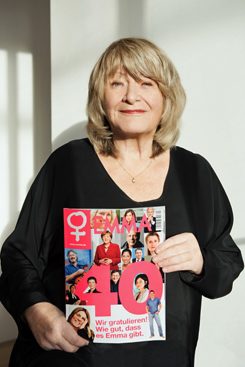 Alice Schwarzer, publisher and editor-in-chief | Photo (detail): © Flitner Emma not only informs readers about certain situations and analyses them, but also instigates campaigns: for example, against the acceptance of pornography and prostitution, or for women's football and Girls Day. As early as 1978, we reported for the first time about the sexual abuse of children and in 1979 for the first time, we warned against the threat of a politicised Islam – that was after my journey to Iran shortly after Khomeini had seized power. It is a topic we have been forced to stick with. For thirty years, Emma was in fact the only German-speaking publication to recognize and report on the threat posed by Islamic fundamentalism: about Afghanistan, Chechnya (where Sharia law was introduced in 1993), or about Algeria’s “Black Years”, in which hundreds of  thousands  of people were victims of the civil war incited by Islamists - a war which was totally ignored by the West. And, of course, about Islamist agitation right in the very hearts of the big European cities.  And we systematically portray very different role models – strong women, who give us heart.

Your uncompromising attitude and reporting has often been criticised as one-sided. At the same time, it has contributed to" Emma " establishing itself as a leading feminist medium. What do you think are the greatest achievements of your magazine?

Emma changed people’s social awareness and strengthened women's self-esteem. Emma influenced laws and broke with taboos – and, in doing so, forced the other media to start dealing with issues that had been ignored for so long, for example, violence in relationships or the sexual abuse of children.

Since "Emma" was first published on January 26th, 1977, the situation of women in Germany has decisively improved in terms of equality. Do we still need a feminist magazine today?

The question is legitimate. Never would I have dreamed in the past that the world would be so open to women in the year 2017 and that we would have a very successful female chancellor. On the other hand, some of the old problems are still around and some new ones, too. One of the old problems is the division of labour between men and women. 47 per cent of all working women in Germany work part-time. This means a lack of economic independence and, in the case of divorce or separation, a dramatic plunge into the poverty of old age. And then there is the delusion of youth and beauty ... So you see, still a lot of work to be done!

The US feminist activist, Ti-Grace Atkinson, said about the feminism of the 1970s and 1980s: “Sisterhood is powerful. It kills mostly sisters.” Does this also apply to the current debate on feminism?

There you are touching on a painful issue. The US feminist, Robin Morgan, once said in the seventies – the first step feminism should take is not reconciliation with men, but reconciliation among women. The tragedy of women is that while they are affected as a group, they do not see themselves as a group. Traditionally they are enemies. In the past, when the weal and woe of every woman depended on the grace of a man, every other woman was a life-threatening rival for her. Women still have not got over this. I personally have experienced both sides: the warm-hearted solidarity and devotion of women, especially of young women – but also aggressiveness, envy, rivalry. And unfortunately, in this respect women are still allowing themselves to be instrumentalised, especially in the media. Although in the end they are the losers themselves.

“The Last Political Magazine in Europe to Remain in Feminist Hands”

Meanwhile, the magazine is competing with numerous “younger” formats such as Missy Magazine or Kleinerdrei.org. Where is "Emma" to be found on the national and international feminist media landscape?

Emma is, in fact, still the leading feminist medium, and that applies way beyond the borders of Germany. The magazines you mentioned are in some cases interesting, but in the end they are special-interest options: for pop culture or Net feminism, etcetera. As far as I know, Emma is the last political magazine in feminist hands in Europe. We are not a women's magazine! We produce Emma for everybody – way beyond the strict sense of the word feminism.

The German journalist and publicist, Alice Schwarzer (born in 1942), is the most famous German feminist. Emma magazine, founded by her, has been published since January, 1977. And to this day she is still its publisher and editor-in-chief. Alice Schwarzer has published numerous books and has received several awards for her political commitment.

Stefanie Zobl is a freelance journalist who works, amongst other things, for the television news team at Deutsche Welle.