Radio art
Art through the ether

Radio art is almost as old as radio itself, and yet it is little known as an art genre. We present radio art from Germany – and from around the world.

The radio art entry in the German version of Wikipedia was compiled in October 2016, nearly a century after the initial wave of radio broadcasters was established around the world. Radio art is thus an art genre in its own right and one that has successfully eluded categorization, despite having a long history. In Germany, Hans Flesch, a graduate in medicine who specialized in radiology, was commissioned by regional broadcaster Südwestdeutscher Rundfunk back in 1924 to come up with a synthesis of technology and art that was inherent to radio. The result was the radio play, which remains extremely popular to this day. Over the decades, visionary programmers at public service broadcasting companies ensured that contemporary authors and composers created works especially for radio – from Bertolt Brecht and Kurt Weill to Heiner Müller and Heiner Goebbels. Since 1959, the Karl-Sczuka-Preis has been awarded by Südwest-Rundfunk (SWR); the most important radio art award, it was originally a prize only for radio plays but was then extended in 1972 to include all acoustic types of radiophonic art.

In launching the  Kunstradio series on Austrian radio station Österreichischer Rundfunk (ORF) in 1987, Heidi Grundmann paved the way for artists in other disciplines to gain access to radio where they could produce work as they saw fit. “Radio art is not a combination of radio and art.  Radio art is radio by artists”, is how Robert Adrian described it when writing on the subject. At the same time, Japanese DIY radio activist Tetsuo Kogawa, by providing simple instructions on how to build a transmitter, enabled artists all over the world to make the radio apparatus their own and to experiment with the materiality of radio waves – the buzzword here being mini FM.

In the 1980s and 1990s, various state-level laws in Germany allowed non-commercial radio stations which, although they do not commission any licence-fee-funded works themselves, are able – depending on their particular orientation – to grant airtime, complete artistic freedom and scope for experimentation. Thanks to affordable and user-friendly digital audio software and hardware, radio art production has been able to leave the studios of the major radio broadcasters since the turn of the millennium and can now be pursued almost anywhere by artists themselves. By way of examples, we present a number of contemporary initiatives and radio artists from the areas described above.

Datscha Radio, a temporary garden radio station, has been broadcasting on German airwaves on an irregular basis since 2012. It was created on the allotment of the artist Gabi Schaffner in the Einigkeit gardening and residents’ community in the north of Berlin – in collaboration with media artist Pit Schultz, who co-founded the non-commercial Berlin artist radio station  reboot.fm.

Datscha Radio | Photo (detail):© Gabi Schaffner, CC BY-NC-SA 4.0
Datscha Radio was on air for five days in 2017, with five editors responsible. All its programmes revolved once again around the garden as the point of reference for artistic works. As such, the fact that broadcasting took place at the dacha proved that radio is a function of the location at which it is created. Radio play author and self-styled “noise-maker” Frieder Butzmann would not have been able to warble his Twitter poem as cheerily at any place other than the garden house, surrounded by trees, the twittering of birds and the sound of lawnmowers. 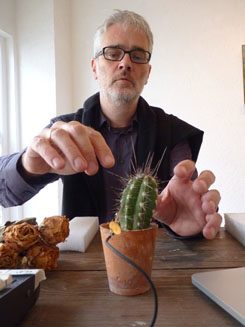 The board planner used by the radio art programming section | Photo (detail): © Knut Aufermann, CC BY-NC-SA 4.0
The Liquid Penguin Ensemble also engages with nature – at least in its award-winning 2007 audio drama Gras Wachsen Hören (i.e. Hearing Grass Grow), in which for example a cactus is made to produce sound. Since the late 1990s, the artists Katharina Bihler and Stefan Scheib – the Liquid Penguin Ensemble – have been producing radio plays and sound art. They make most of their radio plays for the local radio station Saarländischer Rundfunk (SR) in Saarbrücken, the city they have made their home.

Many of the Liquid Penguin Ensemble’s works undergo a whole series of performances before being broadcast for the first time so as to check the material for its theatrical potential. The experiences from these live performances are then channelled into the production of the radio plays once they are ready for broadcast. All their pieces are infused with a dash of subtle humour.

A snapshot taken from “Tanz Aller”, a work performed by the LIGNA group at the Radio Revolten festival | Photo: © Stefan Tenner, CC BY-NC-SA 4.0

On top of her normal work for the station, SR radio play director Anette Kührmeyer curates the annual Primeurs festival of francophone contemporary drama. One fixture on the programme each year is the performance on stage of a radio play translated from French – with all of its constituent parts presented live in front of the mic. The performance is also broadcast directly on radio – a classic example of radio art.

Deutschlandfunk Kultur probably offers the most wide-ranging approach of all public service broadcasters in Germany. One of the four official programming sections at the cultural station, which is broadcast all over Germany, has been named Radiokunst (i.e. Radio Art) since 2016; it encompasses seven weekly series that switch between radio play, feature and sound art and which section head Marcus Gammel and his team like to plan using an analogue board planner.

The Wurfsendung (i.e. Circular) does not fit into this pattern. These are radiophonic miniatures and extremely brief radio plays – up to 45 seconds long – that are interspersed repeatedly into the day’s programmes unannounced. Sometimes they are even subsequently illustrated as part of student projects.

Local, non-commercial stations that can obtain a broadcasting licence in some of Germany’s federal states offer even more possibilities for wider artistic use of radio. One excellent example is Radio Corax in the city of Halle an der Saale in the state of Saxony-Anhalt. In October 2016, it staged the Radio Revolten (i.e. Radio Revolts), the world’s largest international festival of radio art (of which the author of this article was the artistic director). Here are just two examples from the 30-day festival, which would take an entire book to document – they give some idea of the breadth of the radio art spectrum:
LIGNA, a group of artists established in loose association with the independent  FSK radio station in Hamburg, has developed its own kind of interaction with radio in the form of its radio ballet. Radioed instructions allow groups of listeners to form temporary ensembles which perform synchronized movements in the public domain to the great surprise of passers-by.

Tetsuo Kogawa, the aforementioned performance artist and former professor of communication, captured an entirely different kind of dance on video for the festival. He moves four miniature radio transmitters that he built himself around a small arena, and the interference between the individual radiation fields is audible – a meditation on the impossibility of silence in the sphere of radio.
The German Wikipedia entry on radio art that was mentioned at the beginning of this article was written during the Radio Revolten festival – live on air in a series of radio programmes. Since 2018, Radio Corax has offered a radio art residency that is incorporated into its broadcasting schedule – it is only the world’s second radio station to do so after Wave Farm in Acra in the US State of New York.

A glance across national boundaries, which are irrelevant when it comes to radio waves, shows that various homes of radio art have become established in different countries, such as the aforementioned ORF Kunstradio in Austria, and Resonance FM and Soundart Radio, two local, non-commercial community radio stations in the UK that are devoted to radio art.

While many public service broadcasters in Europe have joined forces for the purposes of exchange and cooperation to form the EBU Ars Acustica Gruppe, two dozen non-commercial and independent radio stations from three continents have been members of the Radia radio art network since 2005. A 21-part retrospective on the Radia stations and their artists was broadcast in 2017 at the documenta by the documenta-14 radio programme.

The growing interest of the art world in radio art and the many aesthetic and experimental possibilities it offers has repeatedly led to new types of performance being explored since the 2000s. For example, a 24-hour radio art festival in Stockholm that was broadcast on two FM frequencies simultaneously: Dubbelradio. In the video documentation, the left and right audio channels each play one of the broadcasting frequencies.

In the same way that the German radio play tradition has met with a warm reception in other countries, new non-language-specific forms of radio art from all over the world have become widespread in places around Germany. The diffuse field of radio art these days encompasses also installations, performance and action art in the public domain.

Knut Aufermann, born 1972, lives in Ürzig and works internationally as a radio artist, musician and organizer. Since 2005, he has worked with Sarah Washington under the project name Mobile Radio at events such as the 30th São Paulo Biennial and documenta 14.