Mobility in the city
The Rediscovery of the Bicycle 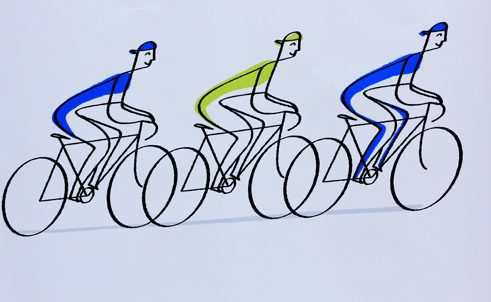 The bicycle is the means of transport of the moment. | Photo (detail): © helenedevun - Fotolia.com

Be it a Fixie, a Recumbent or a Dutch Bike – the bicycle in Germany is enjoying a renaissance. What used to be the pariah of the fully motorised post-war era is now slowly developing again into the means of transport that it once was – and there are good reasons for this.

There has been a lot of water under the bridge since the days when the prudently helmeted Rudolf Scharping used to propagate the image of the cyclist in Germany. He was the former Federal Minister of Defence, candidate for the Chancellorship and later President of the German Cycling Federation. Back in the 1990s, with his provincial staidness, he embodied the prevailing image of the cyclist as a weekend tourist and a father on a day out with his family – somewhat boring and not particularly attractive.

Now however the bicycle has taken on a new lease of life. Young urbanites spend a lot of money on customised bicycles, trusty old bone-shakers are nurtured and cared for like vintage cars and a cavalcade of thousands of cyclists paralyse the inner city at critical-mass demonstrations in Hamburg, Cologne and Frankfurt. This is their way of showing that they are an element of road traffic that has to be taken seriously and one that politics should react to. After all, the number of people who ride a bike as their main means of transport is growing, above all in the urban environment. According to the Federal Statistical Office 30 per cent of all households in German cities with a population of more than 500,000 use only the bicycle as a means of transport – they do not have a car or a motor bike. In 2003 the share was only 22 per cent. The bicycle seems once again to be slowly regaining its position as a means of transport for the masses – the position it held at the beginning of the 19th century.

Positive impact on the people

The fact that the bicycle has become the transport means of choice for distances within the city of up to five kilometres has even been “admitted” by the German Automobile Association (ADAC), says Mario Bäumer, the curator of the Das Fahrrad. Kultur, Technik, Mobilität exhibition (The Bicycle. Culture, Technology, Mobility), which is being held at Hamburg’s Museum der Arbeit (Labour Museum) and will be on until 1st March 2015. The exhibition traces the technological history of the bicycle and how it has affected and influenced our transport area.Bäumer went on to say that today people are much more aware of how they should deal with their environment and have realised that the car and its infrastructure have had a negative effect on our habitat. The bicycle on the other hand was perceived as being ideally matched to the urban landscape. This is why the cyclist today was considered to be “modern” and “environmentally aware”. Bäumer also said that although the phenomenon was a temporary zeitgeist trend, a long-term turnabout could well be achieved by improving our traffic infrastructure. In Munich over the last few years the number of cyclists has risen from 11 per cent to 18 per cent. On the one hand this can be ascribed to more intense marketing, on the other cycling “autobahns” have been built that enable commuters to get to work quickly on their bicycles. In other cities like Berlin, Bremen and Oldenburg similar measures have been introduced that have also led to a substantial increase in the number of cyclists.

Fashion trend in the cities

Urbanites have fuelled this trend by elevating the bicycle to a fashion object – and the market has reacted to the demand. “Once again top-quality bicycles are being made and the demand is growing all the time, people are not afraid of being seen on a bike, some even cycle to a job interview without worrying about being looked at askance.” Retro trends and new developments in the field of electric bicycles, so-called pedelecs, have also been observed. “The development of the bicycle came to a standstill with the oil crisis back in the 1970s and did not start to recover until the advent of the first ecological movements in the 1980s and 1990s,” says Bäumer, who grew up in Germany’s cycling city, Münster, and went to university in Amsterdam.So what does the technological future of the bicycle look like? The importance of the bicycle will continue to increase at a moderate rate, Bäumer believes. “GPS and other electronic gadgetry on the bike itself are in the pipeline, when it comes to frame construction, however, we are now almost at the end of the road.” The exhibition shows a carbon frame that weighs a mere 0.79 kilograms and that includes the steering headset. It can be lifted on one finger with no effort at all.

The bicycle – the means of transport of the moment

Although the technological design of the bicycle can hardly be improved upon, some people believe that it could revolutionise the inner-urban commuter routes. This led, for example, to the Deutsche Institut für Urbanistik (German Institute for Urban Studies) in Berlin envisaging pedelecs on specially built cycling “autobahns” as the future of urban transport. Bäumer, however, is somewhat sceptical. “The bicycle is not going to oust the car from the roads as quickly as that.” He went on to say that the bicycle’s positive image, however, was in fact going to move more and more people to get on a bike and that in turn would change the urban scene. The exhibition in Hamburg showcases a vision of cycling paths that show cyclists by means of LED lamps whether they are still within a “green wave” of phased traffic lights – this might of course well be a reverberation from over-optimistic dreams of the future. Nevertheless, even if the old principle of the bicycle does not quite fit in with today’s great visions for the future, says Bäumer, all the various infrastructure projects in many of the large German cities do in fact show that “the bicycle is at least the mode of transport of the moment.”

Mathis Vogel lives and works as a freelance journalist in Hamburg. He writes on political and social affairs, for publications such as „Bild.de“, “Süddeutsche Zeitung”, “Die Welt” and „Stern.de“.