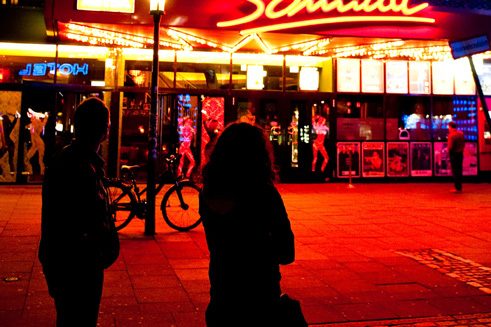 Prostitution, gambling and crime have always characterized Hamburg’s most famous street. This attracts not only tourists, but also crime writers. A foray into crime fiction from the start of the twentieth century to the present day.

The tooting of a ship’s horn can be heard from the nearby Elbe river and thumping bass beats permeate through the open doors of bars, bistros and brothels: the Reeperbahn in Hamburg-St. Pauli is one of the world’s best-known red-light districts, a tourist attraction and not in fact a particularly dangerous part of town. Families with children can be seen strolling down this “avenue of sin” during the day, while in the evenings and at the weekend its pavements teem with party-goers, groups of stags and hens, and sixth-formers on class trips. One frequently encounters groups of tourists on their way to watch Rocky the musical, which is on show at the Operettenhaus at Spielbudenplatz at the eastern end of the Reeperbahn. This is a tame red-light district – provided one steers clear of the darkest side alleys and seediest establishments.

Around the local police station

This was not always the case: until 1942, a popular dance hall named “Zum Trichter” (i.e. The Funnel) for its characteristic shape, was to be found next door to the Operettenhaus – where nowadays the “dancing towers”, two high-rise buildings completed in 2012, are situated. In this relatively harmless dance hall, Heinrich Hansen can but sit by and watch as his childhood sweetheart slides once and for all into a life of depravity. Hansen is the main character in Virginia Doyle’s St. Pauli Trilogy, Virginia Doyle being crime fiction author Robert Brack’s pseudonym. His Chief Inspector Hansen was born in St. Pauli and grew up in the neighbourhood. He knows the people here: the oddballs and shady characters, the whores, the music hall artists – all those who do not fit into the standard social mould. Having grown up with them, it is not always easy for Hansen to be a policeman at the Davidwache – Germany’s most famous police station – because it sometimes means investigating his former friends and classmates.

The St. Pauli Trilogy spans a period of forty years: the first novel, Die rote Katze (i.e. The Red Cat), is set in 1903; volume two, Der gestreifte Affe (i.e. The Stripy Monkey), takes place at the start of the roaring twenties; while Die schwarze Schlange (i.e. The Black Snake) brings the trilogy to a conclusion in 1943. In his carefully researched historical crime novels, Brack brings the Reeperbahn district of the early twentieth century back to life. Although the murders which Hansen investigates are fictitious, the novel provides a vivid and thrilling taste of the atmosphere and events of the time and the changes which the city and society has undergone.

Until the spring of 2015, the Eros Center was to be found somewhat further westwards along the Reeperbahn on the other side of the street, next door to the legendary “Ritze” bar. Built in 1967, this was Germany’s first large-scale brothel, testimony to a time when the sex business was booming and reached a mass market. The Eros Center was both a symbol and a barometer of the red-light district. It was long claimed that whoever controlled the Eros Center also controlled the Reeperbahn. And in the seventies, this was two gangs of pimps: “GMBH” and the “Nutella gang”. They engaged in a battle for dominance which became increasingly brutal. While disputes were initially settled with fists, the eighties were the era of shootouts. One famous name is that of Werner “Mucki” Pinzner, a hitman who killed eight people for the boss of a Hamburg gang. He was never convicted because he shot the public prosecutor, his wife and himself during his last police interrogation – a particularly dark chapter in the history of the Reeperbahn and the city of Hamburg.

A multi-award-winning screenplay author and master of German-language noir, Frank Göhre used these events as the basis for a trilogy of novels set in Hamburg’s red-light district. In Der Schrei des Schmetterlings (i.e. The Scream of the Butterfly), Der Tod des Samurai (i.e. The Death of the Samurai) and Der Tanz des Skorpions (i.e. The Death of the Scorpion), he depicts the events, skilfully interweaving fact with fiction. He describes with precision and sensitive clarity the warring pimp factions, the Hamburg police scandal of the eighties and the beginnings of organized crime, painting in the process a dark, thrilling, intoxicating and shrewd social portrait of the red-light district, the city and the society of the time.

The Eros Center closed down at the end of March 2015. The sex business is not going well. What was once a gold mine is these days a far less profitable undertaking, as a “bargain-hunter” mentality has now also become the norm on the “geile Meile” (which roughly translates as the “horny mile” and is the title of a collection of short novels and stories by Frank Göhre that is very well worth reading): right next door to the “Geizclub” discount brothel is to be found a McDonalds, followed by a hostel and an amusement arcade. The big money is no longer to be made here.

These changes are reflected in the crime novels of Simone Buchholz. Just across from the former Eros Center, a little bit back towards the east, lies Hans-Albers-Platz. Somewhere here, not far from the infamous Herbertstrasse and close to the Davidwache police station, is the (fictitious) favourite bar of Simone Buchholz’s main character: public prosecutor Chastity Riley is a woman with an unusual name and a heart that has been broken too many times, who in many respects differs in a very positive way from the women usually portrayed in crime novels. Buchholz, who lives in St. Pauli herself, depicts life in this neighbourhood with warmth and intelligence, uncovering the soft core that is often to be found beneath the tough veneer. It is a colourful and unusual area, and one that is not without its dangers – though the real crimes no longer take place here: they are to be found – at least in Bullenpeitsche, Simone Buchholz’s latest work of crime fiction – in the Hafencity, Hamburg’s new landmark development. These days, it is all about property trading and corruption rather than drug dealing and prostitution. Times are changing – as is the city, its crime and its crime novels.