Balladeers
A question of statement

In March 2013 Hannes Wader was honoured for his lifetime achievement with an Echo Award, shortly thereafter Reinhard Mey stormed the charts and young colleagues like Peter Licht and Hans Unstern set new thematic and aesthetic accents. The guild of the balladeers, temporarily become somewhat unfashionable, is back in the running again, presenting itself with confidence and artistic independence.

A look at the history: the balladeer, as a type of musician who not only wrote his own political, socially critical and sometimes bizarre poetic lyrics but also generally sang them himself, entered the scene in the early 1960s. There were several reasons for this. For one, from 1962 on, tours such as the American Folk Blues Festival brought artists like the young Bob Dylan to Europe who embodied the ideal of the original and who gave the germinating folk music scene, to which the balladeers in a broad sense belonged, an important stimulus for its creative self-understanding. For another, following the first phase of the German Economic Miracle, a slight disquiet arose with respect to the West German reality, which was formulated musically at festivals such as Chansons Folklore International – Young Europeans Sing at Burg Waldeck (1964–69).

Among the young balladeers who raised their voices at Burg Waldeck were artists such as Reinhard Mey, Franz Josef Degenhardt, Dieter Süverkrüp and Hannes Wader, whose clear political positions were to accompany the era of the student movement and extra-parliamentary opposition in subsequent years. In general, for about two decades balladeers and popular movements like the peace movement and the anti-nuclear movement went hand in hand. The scene became organized, magazines such as the Folk-Magazin, Sing In and Song emerged. Publishers like Pläne devoted themselves to political song; in 1973 a separate balladeers association, the consortium Song, was founded. Towards the end of the decade new trends, turned inward, became mixed with the great social goals, and the first record of the alternative label Trikont, still an important one for the balladeers scene, was correspondingly entitled: Wir befreien uns selbst (i.e., We Free Ourselves).


Voices of the East

At this time the scene in the German Democratic Republic went its own way. In a first phase of political thaw (1963–65), a young, critical poetry took the floor with the Lyrikwelle (poetry wave) and voices such as Wolf Biermann, Manfred Krug and Gisela May. Subsequently, however, censorship was again tightened and soon the balladeers were part of an official, controlled cultural policy in the form of the singing movement of the Free German Youth (FDJ). The Festival of Political Song, launched in 1970, and the World Festival of Youth and Students demonstrated a certain openness towards the outside world. But the expatriation of Wolf Biermann in 1976, soon followed by that of Nina Hagen, Klaus Jentzsch, Gerulf Pannach and Bettina Wegner, spoke another language. When the GDR gradually dissolved in 1989, balladeers and rock musicians like Tamara Danz, Gerhard Schöne, Hans-Eckardt Wenzel and Frank Schöbel were among the initiators of an appeal that called for democratization and dialogue within the country. A path into a new era had been opened.


The generation of sons and daughters

Wolf Biermann, Hannes Wader and Reinhard Mey are among the authorities in the business. They are faced by a young and very wide-ranging scene that, following the period of reorientation in the late 1980s, has dedicated itself with new confidence to exploring individual and social states. The so-called Hamburg School, for instance, has since the 1990s proven to be a pool of artists who have established a lyrical laconism in pop music, as have Blumfeld, Die Sterne and Tocotronic, and beyond this also produced a new type of pop-influenced balladeer such as Bernadete la Hengst, Bernd Begemann, Tom Liwa and Niels Frevert, who are interested in the political dimension above all as a reflection of the personal. An important influence on this circle was the band Element of Crime around the Bremen author and singer Sven Regener, who not only wrote a successful fall-of-the-wall novel, Herr Lehmann, but has also made musically popular the art of texted casualness.
Hans Unstern: Ein Coversong, source: H. Unstern / Youtube

Since then, the scene has opened on many sides. For example, a dazzling figure of the new poetic ballading, with a penchant for political asides, is the Cologne musician Peter Licht. His associative texts helped him to establish not only collaborations with the Hamburger Schauspielhaus and the Munich Kammerspiele, but also a type of the literarily engaged composer whose work has the effect of being genre-crossing. The Dutch musician and graphic designer Funny van Dannen, by contrast, grew up still within the circle of punk and subversion. Since the late 1980s he has appeared with sometimes humorous, sometimes bitter socially critical texts for guitar and is in this way a figure of the transition from the old guard to the young poets. The Wiesbaden balladeer Gisbert zu Knyphausen is again one of the literarily adept singers, who pursues the trend to masculine melancholy with often quirky, poetic texts using historical diction and so sees himself in the tradition of Element of Crime, Rio Reiser and the early German rock group Ton Steine Scherben. And his Berlin colleague Hans Unstern goes even a step further in the direction of stylistic individualism with a mixture of sound collages, avant-garde pop and associative, sometimes almost Dadaist texts. 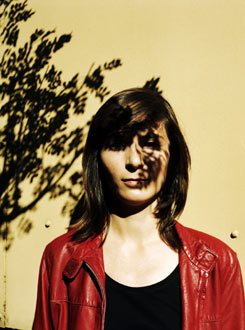 Poetry slam meets music and literature: the singer and composer Lydia Daher. | Photo: Gerald von Foris / Trikont For the Berlin-based singer, composer and electronic music producer Barbara Morgenstern, on the other hand, the German language is only one part of the musical cosmos. English is equally so, her texts design a personal view of the world, her music draws on the Berlin scene and so is international successful. Lydia Daher comes from the poetry slam scene, whose art of spontaneous word juggling is reflected in her songs. Music for her is only one medium; poems are another, and the literature scholarship holder has now brought out her own volume of poetry. The Berliner Christiane Rösinger, who along with Funny van Dannen was one of the founding members of the legendary subculture group Lassie Singers, was already present in the scene of the late 1980s as a book author, journalist and singer, but only recently also active as a solo artist. Artists such as her show the new passion for ballads: today, in contrast to the early years, it is less direct political and social themes that are reflected upon than the individual in the larger context – reflected upon philosophically, humorously and not infrequently with a pinch of self-mockery.

Ralf Dombrowski works as a music journalist and photographer for “Süddeutsche Zeitung”, “Bayerischer Rundfunk” and many music magazines.

During the last few decades Early Music has become an important genre in German musical life. “Early Music from Germany” informs the reader about an area of music-making full of vitality, exhibits useful links and provides details about selected areas of the engagement of the Goethe-Institut.

Jazz in Germany is founded upon a wide spectrum of artists and stages, labels and festivals, universities and competitions.
“Jazz from Germany” provides information on current trends and the most important developments of the past few years, offers links to the jazz scene and introduces selected Goethe-Institut activities.

Electronic music emanating from Germany is the focus of great attention worldwide. “Electronic Music from Germany” informs about current trends and the most important developments over the past few years; it also provides additional links to labels, clubs and festivals and presents selected activities of Goethe-Institut.

After the US, Japan and Great Britain, Germany is the world’s fourth-largest music market. “Pop from Germany” provides information about the latest trends in the pop/rock, hip-hop/soul and global pop/reggae genres and offers further links.

The latest from German bands – monthly: listen in, subscribe!

For the newest in German music, check out our German Pop Spotify channel!

Podcast on Goethe-Institut concerts around the world