Hanns Eisler was the class warrior at the side of Bertolt Brecht, but also the star composer of socialist Germany. This has made it difficult for posterity to pay tribute to his work without critical reservations. Fifty years after his death, the political Hanns Eisler stands in the way of an appreciation of the artistic figure. A survey of current trends in the reception of his work.

‘Those who understand only a little bit about music don’t understand anything about it.’ This sentence is rightly commonly attributed to Hanns Eisler, although Eisler borrowed it from Georg Christoph Lichtenberg. That is characteristic of Eisler: the ‘art of inheriting’ – that is, the ingenious and free-spirited use of existing materials – and a life and thought in contradictions were two important strategies of his art and life. And music, according to this paradoxical principle, always points to non-music – to the political and social sphere, which is what is really important and in which the character and task of music is defined. Is therefore music as an art form not autonomous? Yes, music is free, but when it stages its freedom as self-sufficiency it becomes politically naive.


A stance at odds

For Eisler, it was always a matter of contradiction, also as the opposite of affirmation. This, in his view, was the social mission of music. With his resultant radicality and multi-facettedness, the composer fell between two stools his entire life long, in a clear, well thought-out stance. No wonder his music does not shine in the contemporary concert round. There is much of his that deserves an ongoing and intense treatment, but his music simply smoulders there. Only occasionally does it penetrate to the surface in unexpected places, and bears surprising fruit. 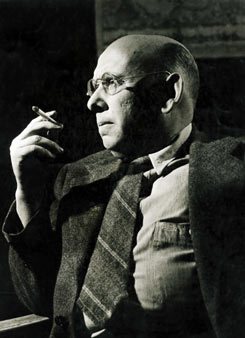 Hanns Eisler in the fifties. | Photo: Archiv Dr. Jürgen Schebera, Berlin / Thomas Neumann In Berlin, for example, the Academy of Music is named after him. The school concerns itself with that portion of his legacy which belongs to the sphere of the middle-class concert world and which Eisler himself was not particularly fond of: the symphonic music, chamber music, film music. In a tradition-conscious context of song, however, the Academy also cultivates another branch of Eisler’s work, his music for the workers’ movement, a repertoire that, though not very large, is distinctive.

A third branch, in which the other two are dialectically sublated, are the lieder. They form a continual focal point throughout his compositional work. There are lieder set to various texts, including Eisler’s own, embedded in changing contexts and frameworks of music, history and politics. It was in lieder that Eisler came to an understanding with and about the world. It was in lieder that he gave expression to private concerns and recorded concerns of general significance. And it was with his lieder that the current and diverse, if not very broad, reception of Eisler’s music began.


World mosaic of the lieder

Frankfurt am Main was the starting-point and is still the centre of this Eisler reception. It began in the 1970s and is closely linked to the names of the jazz saxophonist Alfred Harth and the composers Heiner Goebbels and Rolf Riehm. Together with amateur musicians, the three founded The So-Called Radical Left-Wing Brass Band, whose practice of questioning social meaning and social horizons was infectious. 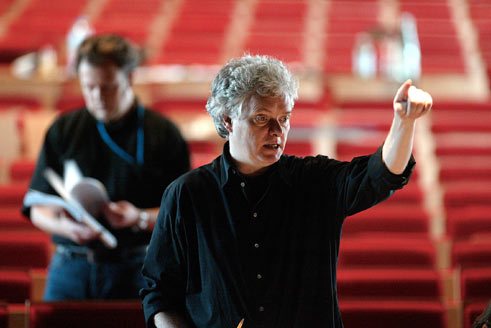 A pioneer of a new appreciation of Hanns Eisler: the composer Heiner Goebbels. | Photo: Wonge Bergmann / ECM Records Heiner Goebbels, who wrote his diploma thesis on Eisler, keeps Eisler influence alive in his own work. The production Eisler Material (ECM) with the Ensemble Modern is a landmark of the current, commemorative reception. On two LPs – Vier Fäuste für Hanns Eisler (i.e., Four Fists for Hanns Eisler) (FMP) and Vom Sprengen des Gartens (i.e., Of Watering [or Exploding] the Garden) (SAJ/FMP) – Goebbels and Harth have opened up contemporary perspectives, beyond the traditional workers’ songs and without spurious gestures of defiance against the bourgeois music world.

Eisler has left a deep intellectual mark above all on the work of Rolf Riehm. When Riehm reflects on composition, he always thinks in oppositions and beyond them. The peculiarity, the obstinacy, of his music and its specific response to non-music is one of Riehm’s key concerns, just as is a clear but never simple stance towards the material.

A renewed study of the composer began in the late 1990s in and around Frankfurt. The agents this time were above all the actress Michaela Ehinger and the three musicians Oliver Augst, Christoph Korn and Marcel Daemgen, who had got together in the group text.xtnd. They discovered, or produced, the post-modern Eisler, the composer of emotionally intense lieder whose intensity and intimacy arose precisely form their nonchalant negation of any sentimentality. Under the group name * arbeit * (i.e.,* work *), they produced two CDs that showed Eisler as a composer of artful, cool-sentimental Brecht lieder, as a reflective musical agitator with pop music appeal, and as a clever help-yourselfer in the German used poetry market.

In 2010 contemporary jazz witnessed an up-to-date Eisler reception when the group ‘Das Kapital’ produced advanced jazz trio music with only a pinch of irony and an all the larger surplus of creative playfulness. If one knows Goebbels/Harth and text.xtnd, however, one will find only old acquaintances on the albums Ballads & Barricades: Das Kapital plays Hanns Eisler and Conflicts and Conclusions, with the exception of the Die Moorsoldaten (i.e., The Peat Bog Soldiers), with which Eisler had absolutely nothing to do. And in addition to these receptions, the Hanns Eisler Academy of Music regularly holds an Eisler Day on November 9th, when students perform a random review of Eisler’s œuvre in all its many facets.

Currently there are particularly two books that, each in its way, keeps the memory of Eisler alive. One is the excellent biography by the musicologist Friederike Wißmann Hanns Eisler: Komponist, Weltbürger, Revolutionär (i.e., Hanns Eisler: Composer, Cosmopolite, Revolutionary , Edition Elke Heidenreich), who interprets Eisler’s life from the point of view of his music and whose interpretation, for all its cautious detachment, is strongly influenced by its great sympathy with its subject.

More surprising than this scholarly work is Thomas Freitag’s literary approach Das Neue so merkwürdig ... (i.e., The New So Strange ..., Neues Leben Verlag) by means of a fictional, albeit theoretically possible, meeting between Eisler and John Lennon in 1962 in a London pub: two working class heroes who have common, different and sometimes surprisingly similar thoughts about the meaning of music in the twentieth century. Eisler, as we might expect, has the last, the politically decisive, word: ‘In an advanced society it is always a question of pleasure. But not only!’

Hans-Jürgen Linke writes as a freelance journalist for the German magazine neue musik zeitung and the Frankfurter Allgemeine Zeitung and Frankfurter Rundschau newspaper mostly about jazz, modern and contemporary music.